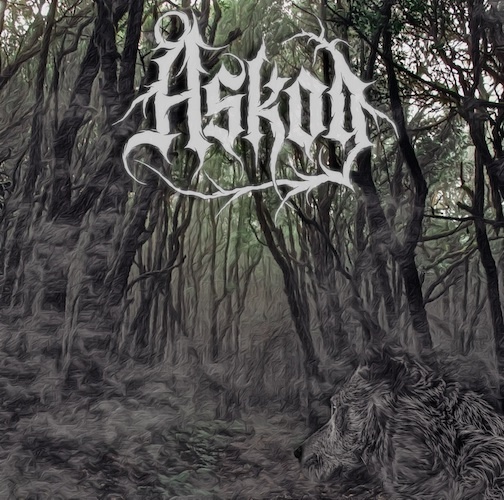 The Swedish duo known as Murdryck began musical life in 1999 as a “Blackened Dark Ambient” project, disappeared for a time, and then rejuvenated themselves as a Black Metal band in 2014. Thereafter, they released two excellent albums, 2016’s Antologi MMXV (reviewed here at NCS) and 2019’s Födelsen. And then, to the sorrow of Murdryck’s fans, they disbanded. But it turns out that the two men behind Murdryck weren’t finished after all.

That duo — bassist/vocalist Lars Hansson and guitarist Adam Chapman — came back together early this past summer, inspired to renew their cooperation in pursuit of fresh ideas. Adopting the name Åskog, they ensconced themselves in a decrepit forest house owned by Lars deep in the woods of Värmland and wrote four songs between July and August. As they explain, the themes of the music were spawned by the band’s presence in that old forest house, with its own morbid history and its wilderness setting, during a time when the Covid-19 pandemic turned the world into chaos: “You only have to watch nature documentaries to realize the natural world is truly a horrific place. The great outdoors is romanticized, but the reality is it is brutal with no room for concession or concern.”

But what kind of music was born of this reunion, and Åskog’s focus on the cold and harsh brutality of nature? You are about to find out, because today we’re streaming Varg, Åskog‘s first demo, on the eve of its October 17 release. In its digital edition, it includes two of the four songs written this past summer, and a cassette tape edition will include a third one as a bonus. 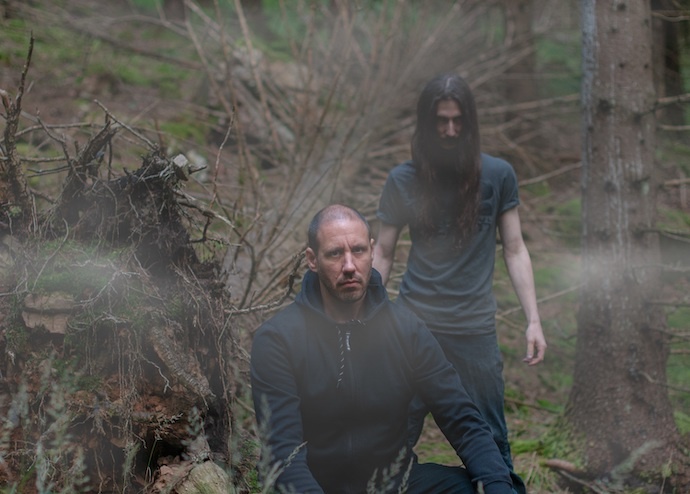 Compared to the albums of Murdryck (which you can find here and here), both similarities and differences are evident in Varg. Murdryck was capable of generating torrid conflagrations, but equally content to let the drums rock and the bass to stand prominently forward, surrounded by sinister tapestries of richly varied guitar witchery. Their music was multi-faceted but always seemed to generate an atmosphere of twisted necro menace.

Among the similarities to be found in Åskog are Hansson’s vicious, ear-shredding vocals, which sound like the expulsions of a furious demon being strangled with barbed wire. In addition, aided by session drummer Rodion Belshevits, the band rock and stalk a lot more than hurtle and blast. And Chapman’s guitar work is still of a very high caliber. But stylistically Åskog’s approach to black metal is much more of an eclectic hybrid in which ingredients drawn from classic heavy metal and hard rock, as well as doom and even hints of death metal, all play a role. The result is songs that are unpredictable but powerfully charismatic.

The two songs on the digital edition of Varg are the title track and “Korp”. The first of those is built around a strong melodic hook that surfaces almost immediately, slowly slithering and shimmering in hypnotic fashion over a steady and stately rhythm and the reverberation of long, ominous chords. But lots of changes lie ahead. In its intensity, the music gradually catches fire as Hansson’s goblin-like snarls enter the stage. The riffing grows more fiery and frenetic, as the drums pop and scamper, boom and jump. The vocals double-up, delivering increased ugly viciousness, and the fretwork skitters and flares.

The changes continue to come. The pace slows again, and the music takes on an air of cold menace and then buzzes like swarming hornets, with the leads sounding feverishly deranged. The guitars vanish, the bass hums, and when the intensity swells again, so does the feeling of sinister hostility. When that seductive opening melody returns, it returns with a feeling of wildness.

“Korp” is less experimental and unpredictable, but a hell of an exhilarating ride. It has a pronounced feeling of classic heavy metal and hard rock, thanks to a vibrantly pulsating riff backed by broiling leads and bounding drums. The vocals are as nasty as ever, and descend into malicious growls. The rhythm surges into a gallop and the guitars become more febrile, creating a feeling of hellish exultation, amplified by the glorious flickering of the leads, the frantic snap of the snare, and the pulse-pounding tumult in the low end.

The bonus track on the cassette edition of Varg is “Vatten”, which was the first song that Åskog wrote, albeit in a different form. In its finished form, it’s a powerhouse track. The band introduce it with a sweeping panoramic melody over a thrilling bass line, but then Chapman’s guitar performance starts darting and swirling in a semblance of sonic black magic, creating a feeling of mercurial evil. Hard-rocking beats interchange with tumbling progressions; the leads soar; and there’s a screaming, fret-melting solo in the midst of melodic fanfares. Propelled in part by that strangled vocal intensity, the fieriness crescendos, and the song flies toward the heavens, leaving the listener with a feeling of devilish ebullience.

As you can gather just from reading those words, the three songs on Varg each have their own identity, and that makes listening to this short demo a very enjoyable experience. And it’s also an experience that builds intrigue about what Åskog’s forthcoming album will include. And yes, they are working on a full-length which will be released in 2021. The band comment on Varg and on what’s coming next:

“Musically, all the songs in some way reflect the wild and chaotic aspects of nature. The songs can be busy with sudden twists and turns but also very easy to listen to with simple passages and ear-candy melodies. The lyrics are very well-thought and metaphorically all tell some kind of story. There is more focus on the ugliness and brutality of the wild, though.

“The demo lays a solid foundation for the album, which contains even more surprises and more musical layers than heard on this demo.”

As noted earlier, Varg will be released tomorrow and will be available on Spotify, iTunes, and Bandcamp, where itr’s available for pre-order now.