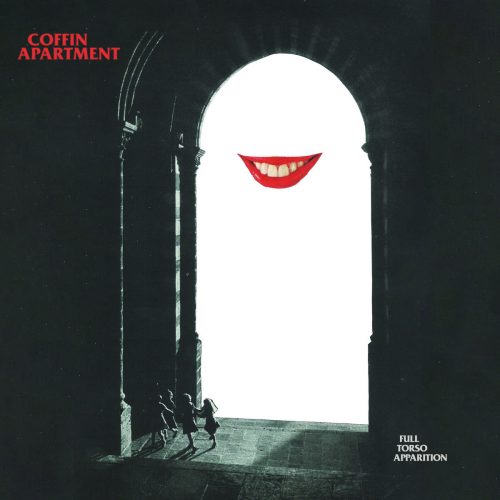 In Hong Kong, where a population of roughly 8 million people are packed into a confined area in which little developable land remains, landlords have resorted to illegally subdividing space into tiny cubicles for rent in which all living activities must take place within areas as small as 15 square feet. Known as “coffin apartments”, these nightmarishly claustrophobic holes have been condemned by the United Nations as “an insult to human dignity”.

Coffin Apartment is also the name chosen by a Portland trio whose unsettling music is the subject of this premiere — though in the age of the coronavirus the name has different and perhaps even more relevant connotations.

Trying to succinctly describe the audio assaults of Coffin Apartment is not an easy task. In a freewheeling way they’ve thrown elements of death metal, grind, hardcore punk, sludgy noise rock, and even prog and psychedelia into a blender. The results are heavy as hell, rabidly raging, and mentally destabilizing. Calling the music “off kilter” would be an understatement. But the results are also so surprising and so electrifying as to become unexpectedly transfixing. 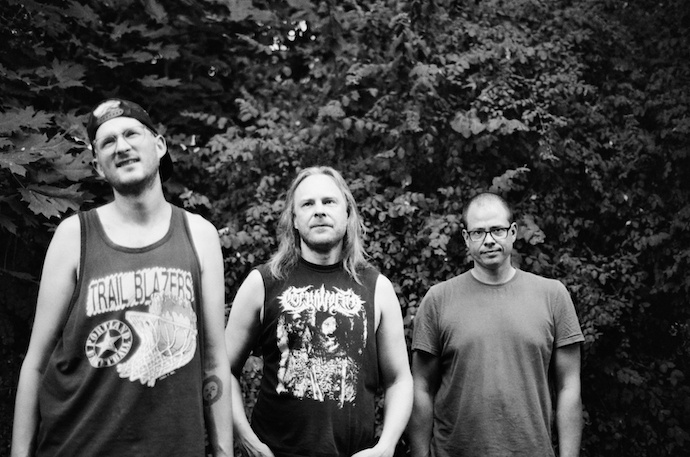 Perhaps something like this could have been expected, given the band’s origin story. It began, we’re told, when “shortly after the break up of the noisy-metal-chaos of Portland’s A Volcano, guitarist/vocalist Johnny Brooke received a text from Justin Straw, drummer/vocalist of Seattle’s deep-space powerviolence duo Same-Sex Dictator, who had recently moved to Portland and was looking to start a band”. They soon recruited bassist/vocalist Brody Mennitto of longstanding Portland math rock outliers Toim, and the final lineup was solidified.

Together they first put out a self-titled release on cassette in the spring of 2019, and now they’ve got a full-length named Full Torso Apparition that will be released on November 20th. The song we’re presenting today, “Transient Exuberance”, is off that album. Justin Straw shared with us this comment about the track:

“Transient Exuberance is one of the earlier songs written for the record and sonically shows many sides of the band. The subject matter of the song feels even more relevant now than when it was written, speaking to extremist points of view that insist the entire population of the planet must agree with them and cannot fathom a different perspective. There’s an awakening that occurs when new ideas are discovered and embraced, often at a younger age, but our fragmented world is currently in a state of iron-fist idealism from multiple sides, an infantile ‘my way is the only way’ mentality.”

In its unstable moods and unpredictable mutations, the song is crazed and cutting, hallucinatory and violent, brutally cold and crushing, but also laced with the kind of primal physical hooks that still make you want to move even as the music is taking scalpels to your sanity.

The song’s intro is perversely riveting. After a dose of unrecognizable noise, it launches into a collage of skull-popping beats, gut-churning bass, and squirming, shivering fretwork whose freakish dissonance puts teeth on edge. A mix of throat-ripping shrieks and savage growls makes the cavalcade of sound seem even more deranged and perilous. But lots of changes lie ahead. The song becomes a berserker assault of skittering and slashing guitar violence and rabid, brutally hammering drums. Just as suddenly, it segues into a strange bass-and-guitar duet, one burbling and the other screeching like a demented bird, over a head-bobbing drumbeat.

As the song begins to gather itself again for another attack, ringing guitar arpeggios layer over increasingly frantic drum progressions, and then it becomes a slow stomping monster that screams and roars, pounding with merciless brutality. The guitar becomes an ice-pick to the eardrums while also discharging slashing chords. At the end, the band reprise the song’s maniacal introductory passage, but with extra dementia.

There’s another song out in the world from this album. Its name is “A Quagmire of Filth and Shame“. It’s a hell of a trip too, and we’ve included that stream along with today’s premiere. The album will be released digitally via Bandcamp, and on colored vinyl. For more info, check the links below.

One Response to “AN NCS PREMIERE: COFFIN APARTMENT — “TRANSIENT EXUBERANCE””