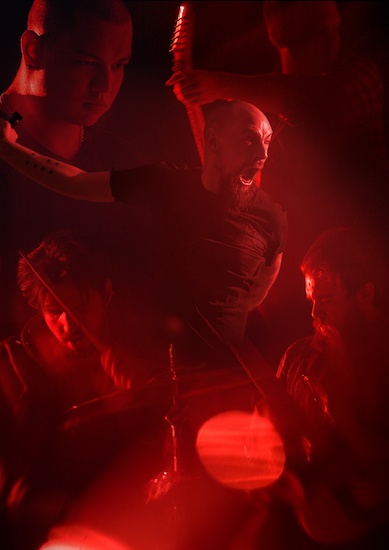 We’re about to premiere a red-hot song and video from the new EP by Katapult. It’s so damned tempting to just quote the title of the EP — Shut the Fuck Up and Press Play — and get out of the way. But we have to have our own fun too, even if it probably pales in comparison to the amount of fun it looks like the Katapult crew are having in this video. So, on we go….

You can see the name of this first single from the EP up above, but there’s a sub-title: The complete name is “Load the Katapult (your old band is shit)“. They’re probably not talking about your old band in particular, so settle down. Though, actually, settling down is not what any red-blooded listener will do when they hear this track and watch these Swiss and Swedish thrashers stomp on the gas pedal. 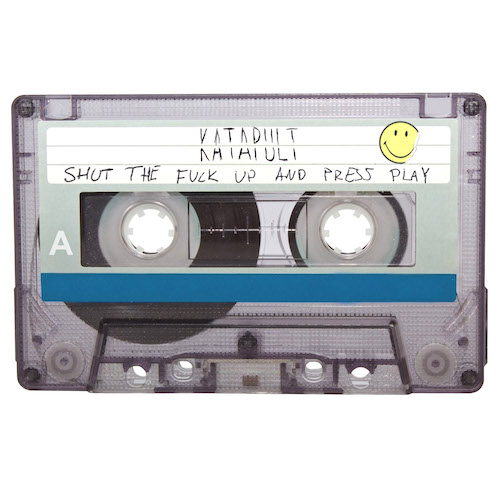 When you’ve cooked up a riff as good as the one that launches “Load the Katapult“, you could probably just let it ride. It takes about three seconds for that darting, feverish riff to get its hooks in your brain stem, and it doesn’t let go. It will probably make you want to howl at the moon, which is pretty much exactly what frontman Johan Norström does (though it’s probably more accurate to say he’s screaming at the moon), with occasional help from his bandmates’ gang shouts.

But while that main riff is golden enough to carry the song by itself, let’s not diminish the contributions of the rhythm section, whose galloping and gut-slugging grooves make the song an even more turbocharged and neck-wrecking experience. It also turns out that guitarists Florian Moritz and Joel Purificacion have more to offer, moving that blood-boiling riff up and down the scale and also taking detours that transform the song into something much more vicious, seething, and brooding.

But while the song turns out to have more twists and turns than you might expect from the way it begins, it remains a high-octane, rabble-rousing thrill-ride that’s so damned addictive it requires no further encouragement to crank it up again and again. And the video, created by Florian Moritz, is a kick to watch too, beautifully capturing the raucous energy of the band’s performance.

And NOW we’ll stand back and let you crank this up (but don’t miss other important details about the EP in the space below the video):

Shut the Fuck Up and Press Play follows Katapult‘s debut EP, A Fistful of Truth. It will be released on all the main digital platforms on November 6th. It was recorded and produced by Katapult, mixed by Johan Norström and Henrik Wiklund, and mastered by Henrik Wiklund. Tommy Nilsson played session drums on this track.

As a hint about what else the other three tracks on the EP offer, the credits include Michael Bergvall on banjo and Sebastian Mårtensson performing brass. And there’s melancholy to be found within the music, too.

For more info about the release, keep an eye on these locations: