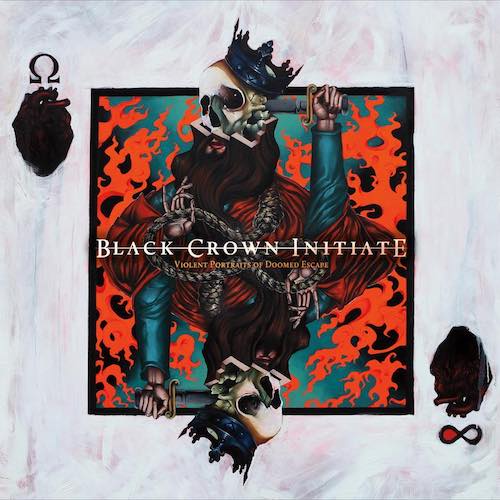 (In this post DGR begins a sequence of seven reviews, which we will do our best to post on seven consecutive days, catching up with albums from earlier in the year that we didn’t fully cover. And to begin we have Black Crown Initiate‘s latest album, released in August by Century Media.)

We’re nearing the end of the year, which means you’ve inevitably seen the occasional author musing to themselves about starting to work on their year-end lists. In fact, I’ve already seen a couple of prospective ones myself, which isn’t weird at all considering it’s still March. But there’s always been something of a compulsion of mine where I feel like if I don’t cover everything I’ve listened to this year then I’m short-changing the bands, even if a disc may have hit way early on in the year, and as far as the internet is concerned may as well have been released in the Cretaceous period.

In some cases it’s fine because that means that there can be some half-hearted attempts at brevity in these write-ups, but man if it doesn’t feel a bit like panicking right before the end of the year, especially while keeping in mind there’s still a few handfuls of releases still heading towards us in the October/November months. I generally try to avoid bringing a personal “I” into the mix when writing for that reason, because honestly, few care about the personal adventures of some dork with a laptop on the west coast; in that way, I try to keep things focused on how the album may play out to the listener while keeping my own adventures fairly light throughout.

It doesn’t really work that way when you write like this though. Instead, it becomes incredibly personal due to just how candid the reviews wind up feeling. Imagine laying your arm across a desk and just sweeping everything off it and you’ll have a mental image of what doing one of these collections can feel like. It’s reckless as hell and shit goes flying everywhere, but wow, look at how clear that desk is now. It is surprisingly freeing.

Thus we make a run at clearing out much of the backlog, some releases I’m surprised haven’t gotten more coverage around here and others matters of curiosity. A few of these are later discoveries and others I’d guess fall squarely into the DGR corner of the NCS virtual office and nowhere else. It’s like a weight is being lifted off my shoulders already.

So long as we ignore the blank ‘potential year-ender list’ file that is currently parked dead center on my desktop.

Truth be told, I actually looked up who handled the reviews and write-ups for the Black Crown Initiate releases prior to this one. I’ve made an honest attempt to try and avoid reviewing bands where I’ve previously reviewed multiple albums by them, mostly so as not to establish an ‘artist beat’, so to speak, where one can see an artist and know who at NCS is going to handle that review. Partially I feel it’s because I want it to be less ‘one person recommending band on NCS’ and more like ‘this specific release really resonated on that corner of the net’. Plus, it’s nice to see someone else’s perspective on a disc you have thought of writing about, and how their thoughts might line up with yours.

What’s interesting about Black Crown Initiate is that every one of their releases has had a different writer cover it for our site. Their Song Of The Crippled Bull EP was handled by TheMadIsraeli; their debut album was handled by yours truly; and their follow-up Selves We Cannot Forgive was reviewed by Andy. That provided three different perspectives on what you could argue are three very different releases.

So, looping back around to the group’s newest album Violent Portraits Of Doomed Escape presents some interesting situations, partially because it feels like Violent Portraits is an attempt by the band to also loop back around to some of their earlier inspirations, an attempt to go back to thematic concept albums and musical suites, while also folding in what they have gotten very good at with their more recent releases as they’ve matured musically. Violent Portraits is surprisingly adventurous, and if it proves anything else, I remain a sucker for a good power chorus.

It’s interesting how much Violent Portraits Of Doomed Escape feels like the band learned from its immediate predecessor. Black Crown Initiate try really hard to tie every song together on this new album, either through segues at the front and back of each song or, in the case of its opening and closing tracks, by bringing back the same musical motifs that define the opening song as a way to close things out. Selves We Cannot Forgive had some excellent songs on it, and interspersed among them were a bunch of ideas that seemed like they were truly building into something great, only to end suddenly, like watching potential beginning to fully flower only to be snuffed out by sudden cataclysm.

Violent Portraits Of Doomed Escape works damned hard to avoid a lot of those pitfalls. Really, the only odd moments where it doesn’t feel like a fully completed song was present are in the interstitial bits like “Bellow”, which seems mostly like vocal exercise turned into a quick breather and intermission break before the album continues on. Needless to say, even though the album has a similar run-time to its siblings, it sure seems like there is a lot more music here. Those who were hoping for a much meatier disc this time around got their wish granted.

In trying to tie everything together the band loosely weave a thematic story throughout songs, sometimes with a more overt protagonist than others. As they do this, the album settles into a groove early on and surprisingly enough doesn’t shift too far away from it. Each song is constructed out of absolutely massive sounding drum and guitar work, with plenty of moments where the rhythm section gets to drive the backing chugs over which the group’s vocal duo get to roar and sing. Early on it feels like Black Crown Initiate settled on a mid-to-fast tempo for all of their songs. Even though there is always something around the fringes – like the acoustic/sung opening of “Invitation” – to make a song different from the ones before it, inevitably they always find their way back to the path of thick groove to keep headbanging to.

It’s also interesting to see how much “Years In Frigid Light” has changed in comparison to its 2019 release as a single form, with a lot more atmospherics and an entirely different back third, drum-wise – gone are the soaring blastbeats in favor of album drummer Gabe Seeber‘s solid double-bass roll to fade out the song; there are even a bunch of pronoun changes to a more neutral ‘they’ so as to fit the story being told. It’s still got the strongest sing-along chorus on the album, which is a little bit of a showstopper given how long the song has been floating around, but hearing guitarist/vocalist Andy Thomas really, really stretch his singing range is one of the highlight moments of the album.

What is a major plus in Violent Portrait‘s favor is that it does seem like the group made a concerted effort to break out of their more established formulas. Although they don’t succeed at said task all of the time, there are often moments (and this impression comes after listening to their previous material a ton) where it seems like the band could have taken the most Black Crown Initiate path possible, only to make just enough of a deviation from it that Violent Portraits continues the group’s trend of having each release be fairly distinct from the others. Even the album art, constructed out of a more stark coloration vs the faded blues and black hues that defined the previous two, brings it in line with the eye-popping rusted reds of their EP.

While there is clearly a solid core of the band’s formula that is heavily reliant on the vocal interplay, Black Crown Initiate spend much of the album doing their best to sort of bring everything else up to that level in terms of spotlight. It seems like they settled on leveling everything around an eight-out-of-ten in terms of focus, so that Violent Portraits Of Doomed Escape finds its groove early and then camps there, becoming a dense brick of prog-death that absorbs more and and more so that it remains distinct. At its conclusion, the album fades out in a song that calmly reflects the disc’s opening ferocity, so that it loops around on itself. And with that, Violent Portraits continues Black Crown Initiate‘s streak of prog-adventurism, which makes every album different, even as they fight to find the middle ground between all of their previous material.