(This is Andy Synn‘s review of the new album by the Finnish dark underlords of psychedelic drone, Dark Buddha Rising, which was released by Svart Records on November 13th.)

You know, despite existing on pretty much opposite ends of the spectrum, Drone and Grind have a weird amount in common… at least, they do from my perspective.

For one thing, both styles are – in my experience – more enjoyable live than on record (with some notable exceptions, of course), and both make a lot more sense to me when they’re mixed in with more… let’s say “traditional”… forms of Metal.

This means that if you want to get me bumpin’ ‘n’ grindin’ then you’d best inject a heavy dose of Death Metal along with it. And if you want me to embrace the Drone you’ll need to bring the Doom too.

On top of that, they both exist in that weird space where, although I understand what people mean when they use these terms, I can’t necessarily define them.

But, to paraphrase Justice Potter Stewart, “I know it when I hear it.”

Case in point, Dark Buddha Rising’s seventh album straddles the line between genres so adroitly that I still can’t tell you exactly where it lands.

My head says it’s Drone, but my heart says it’s Doom, and my guts… well, my guts just say that it’s one of the best albums of the year, and yet another career highlight from Finland’s favourite sub-sonic sorcerors. 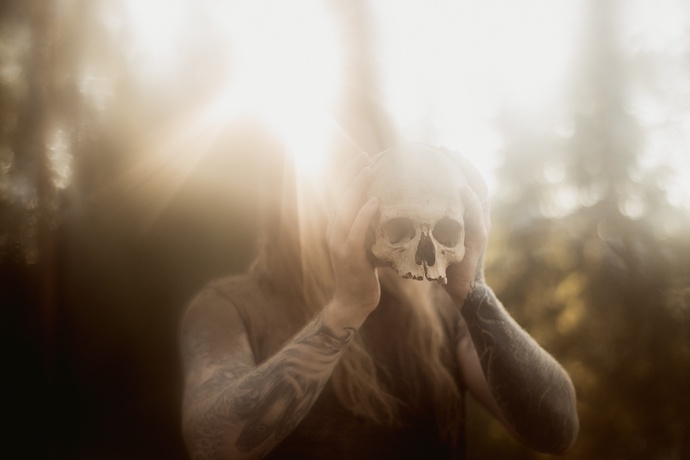 Even if you weren’t aware that this was a Drone/Doom album going into it, the fact that it’s only four songs long, but still clocks in at over forty-three minutes, would probably be a clue.

But you needn’t be afraid that Mathreyata is going to be one of those abstract, ink-blot albums where you can project pretty much anything you want onto it (as is the case with a lot of Drone in my opinion), because while DBR aren’t afraid to take their time making sure all the pieces are in place and all the various layers are aligned just right, they also have no problem cranking things all the way up to 11… and beyond.

This is made immediately apparent by the colossal guitars which introduce opener “Sunyaga”, which kicks things off with just under thirteen minutes of sinister psychedelia and crushing claustrophobia that – somehow – only gets darker, denser, and doomier as it progresses.

It’s also the first indicator, though far from the last, that Mathreyata may well be the band’s darkest work yet, as while it still maintains much of the same intoxicating ambience from the band’s earlier records, everything about it is several shades more ominous and oppressive, making for one seriously bad trip (in the best possible way).

Take “Nagathma”, for example. In lesser hands the track’s lengthy slow-burn could easily turn from “mesmerising” to “monotonous” if allowed to go on for too long. But in the collective hands of a band like Dark Buddha Rising this moody blend of eerie vulnerability and wrenching catharsis is more like listening to Amenra on ayahuasca, all simmering, anxiety-inducing atmosphere, pulsing, ritualistic percussion, and heaving, hallucinogenic guitars.

“Uni”, again, is one of those tracks which – especially considering it’s a wholly instrumental, largely ambient piece of work – could easily fall into the trap of being all promise and no payoff, but the subtle build-up of layers is so gradual, so carefully measured out, that the song’s eventual climax manages to creep up on you practically every single time and always makes an impact.

Of course, there’s no denying that Mathreyata is, ultimately, defined by its titanic final track, “Mahathgata III”, which is practically worth the price of admission on its own, delivering fifteen minutes of droning, trance-like rhythms and rippling drum patterns, keening melodic vocals and scorching, cathartic screams, filthy, fuzz-drenched bass-lines and dramatic, doom-laden riffs, all topped off with an aurora of shimmering synths and psychedelic sound-waves.

Make no mistake about it, this is one of the most immersive, entrancing, and borderline addictive albums of 2020, and a more than worthy addition to any End of the Year list.

It’s also (and I know it’s not a competition, but still) even better than the most recent Oranssi Pazuzu album, as while both records share a similar sense of style, Mathreyata simply has more substance to it.

And you can quote me on that.