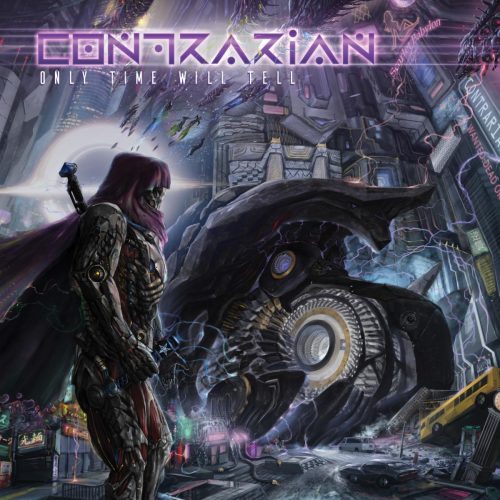 There’s a lot to be said about the new Contrarian album Only Time Will Tell that we’re premiering today, from its concept to its composition and its execution. In a nutshell, those subjects involve heavy-metal escapism, wildly adventurous ideas, and extreme virtuosity — and all those aspects of the music are connected.

The album’s escapist qualities are certainly evident in its layout, artwork, and the lyrics through which the narrative unfolds. The artwork is lavish, and invokes the kind of intersection between fantasy, science fiction, and metal that has been a persistent feature of the genre for decades (if you’re uncomfortable being a nerd, then you’re a sub-par metalhead!).

And in the tale itself, Contrarian again use the adventures of their recurring protagonist “the cloaked contrarian” to convey ideas involving philosophy, theology, and science — this time by sending him on a travel through time in an effort to eradicate past sins and to bring about healing, while also raising the question whether time does indeed heal all wounds. 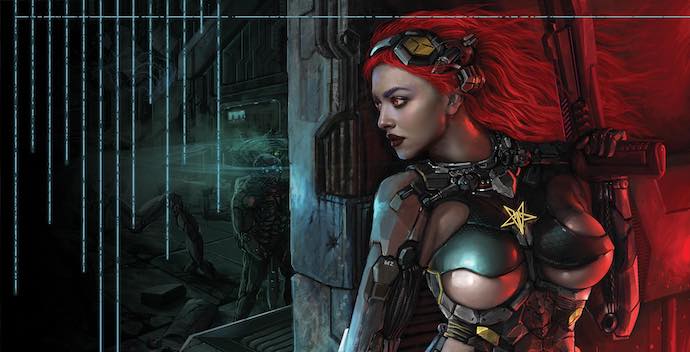 But the album’s music is fantastical and escapist as well, and it also connects to hallowed traditions while also creating a bridge into modernity. Not for naught do Contrarian describe their music as the “new school of old school progressive death metal”. They clearly stand on the shoulders of such giants as Death in its most progressive era, Cynic, and Atheist, but the music also seems futuristic rather than anachronistic.

And it is undeniably adventurous and unpredictable — bamboozling in its intricacy one moment, and sensuous and seductive the next, intertwining bursts of high-speed, high-flying acrobatics with intoxicating, exotic melodies, shifting gears like a Formula One driver, and drawing upon wells of progressive music outside metal (including jazz fusion) while also injecting doses of ravaging savagery.

It’s the kind of music that is as mentally intriguing as it is physically arresting, so imaginatively and elaborately constructed and so multi-textured in its sounds and styles, that it takes many listens to peel back all its layers. Following the music’s course within songs and from song to song, rather than exhausting, is absolutely mesmerizing. It’s like experiencing the excitement of a superb live theatrical performance that makes you want to leap to your feet at the end, yelling for a curtain call.

And let’s not forget the topic of virtuosity. Musical virtuosity has been a controversial subject going back many centuries, perhaps most especially in classical music, where debates rage even today about the pluses and minuses of instrumental virtuosity, both in the performance of works composed by others and in the composition of music that itself exalts feats of skill that are beyond the reach of average performers.

Virtuosity in these respects has repeatedly been scorned as “empty”, as the kind of showmanship that lacks emotional depth and sincerity. Over the ages critics have condemned compositions and performances that channel virtuosity at the of risk overwhelming listeners in “a thundercloud of notes”, creating a storm of sheer intensity, power, difficulty, and sometimes discord, while sacrificing the aesthetics and character of the music — its “poetry”, for want of a better word.

On the other hand, technical virtuosity is capable of producing the kind of thrills that are hard to come by in any other way. As one writer/violinist has recently written of such performances in the classical music setting, “Their very remoteness and strangeness elicit a genuine emotional response in the way they bewilder and beguile.” And in this way, Only Time Will Tell is also escapist and fantastical.

But it must also be said that the new album is far from “empty” and “soulless”, as some virtuosic music can be (including a lot of technical death metal). To the contrary, though the technical skills on display here are indeed beyond the reach of most normal humans, there is an aesthetic to the music, a heart and soul that shines through. It has a warmth and humanity that’s unmistakable, and a sense of the ebullience that comes from people pushing themselves hard at what they do best, and succeeding. (There’s singing on this album as well as deathly growling, and that sounds joyous too.) In short, this is not an instance in which substance and emotion have been overlooked in favor of raw technical prowess, but a case in which they are all allied.

Moreover, lest you think the album is a non-stop rush of escapades in dexterity that drop jaws, it’s not. Take a listen to the title track, for example, which is more likely to make you dream (it’s not alone in that respect). 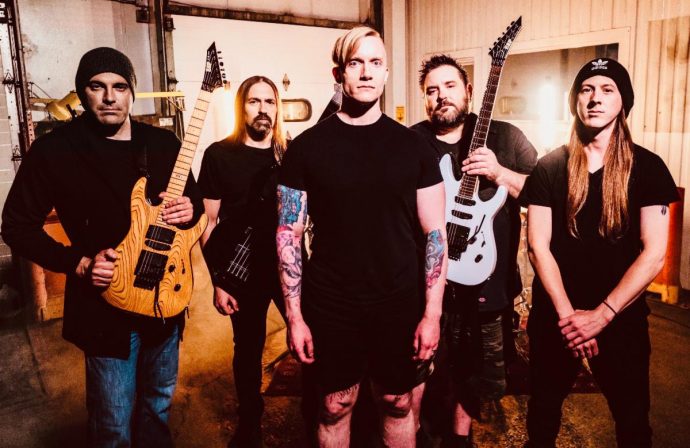 One final note that ties together with other observations above: We’re told that that no quantizing or sound replacement was used in this album except for a bit on the kick drums. As guitarist extraordinaire Jim Tasikas explained to me: “The past two decades have seen prog/tech death metal ignored and not taken so seriously by music critics/media/socialites because of quantizing and sound replacement. It was very important to capture the music organically with veteran producer Neil Kernon (Queensryche, Nevermore, Judas Preist). Needless to say it made me almost broke trying to do it too – lol.”

The album does indeed have an organic sound, and a beautiful mix that allows you to follow what each of these performers is doing:

Only Time Will Tell is Contrarian‘s fourth studio album. It will be released by Willowtip Records on November 20th. Pre-orders are available now:

One Response to “AN NCS ALBUM PREMIERE (AND A REVIEW): CONTRARIAN — “ONLY TIME WILL TELL””