Let’s face it, nothing says death metal quite like the sight of writhing maggots ecstatically feeding on rotting flesh. Skulls hollowed out and stripped clean of their putrefying meat is up there too. You get plenty of such visions in the new Toxaemia lyric video we’re premiering today, along with roaches, fattened worms, ghoulish glimpses of the un-dead, and savage verbal proclamations that leave no doubt what will and won’t happen to you when you die.

As for the music within “Buried To Rot“, it’s another explosive outburst by this re-formed Swedish death metal band from their new album Where Paths Divide, which is set for release on November 20th via Emanzipation Productions, and yet another sign that passing decades have done nothing to dim the band’s ferocity or their ability to give your pulse rate a swift boot in the ass. 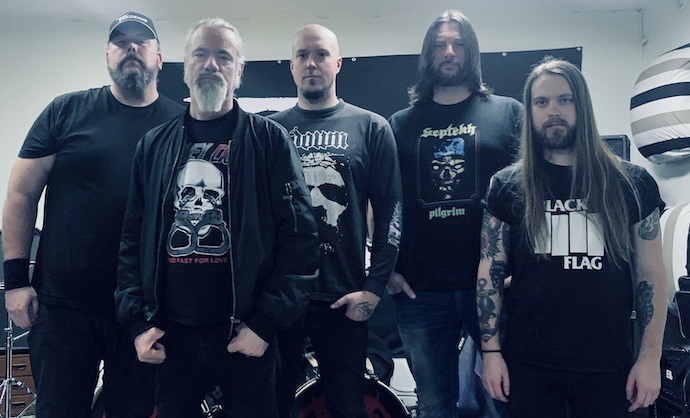 About this new song, we have a comment from Toxaemia guitar player Stevo, who’s also the lyricist on this track: “‘Buried To Rot‘ is about what the title says. When you die your body will just rot or be burnt to ashes and you are gone. No Reincarnation or heaven with a bunch of virgins. That is it. Do you want to live on after death? Make a difference while you are alive and be remembered.”

From the beginning of this song, Toxaemia trigger a barrage of thundering drums, livid howls, and maniacal, cyclone-strength riffing. They punctuate this barbarous, head-hammering assault with humongous detonating grooves and they insinuate ghastly, quivering solos that seem like the audio manifestation of all the squirming maggots. There’s a moment when it seems like the band are going to claw their way into doom mode, but instead it’s just a brief pause before they start pounding and pulverizing with renewed cold-hearted viciousness. Mayhem continues to reign in the riffing, and the leads and soloing still to come are as mad and macabre as ever.

Toxaemia don’t overstay their welcome, although it would have been perfectly fine if they’d carried on the battering destructiveness and frightening dementia a while longer. It’s a different kind of cruelty to get your adrenaline racing and then leave you to calm down so suddenly. 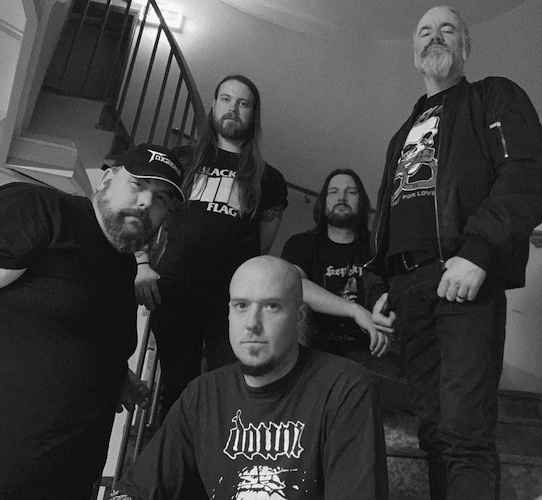 Fortunately, there’s a lot more adrenaline to main-line over the rest of the album. And so you don’t have to calm down too soon now, we’re including three other previously released tracks along with today’s premiere stream.

One of those three, which shares the band’s name, we also presented for the first time back in September. That one also flies like a bat out of hell, with an explosive ferocity that’s exhilarating. As you hang on for dear life, the drums blast and gallop, the riffing boils with the ecstasy of mayhem and remorselessly pounds like piledrivers, and the vocals veer from monstrous growls to berserker shrieks. Feverish leads flash from the onslaught like heat lightning and send the song to even greater heights of slaughtering grandeur.

There is one point in that song when the full-bore attack seems to abate, but it’s a great digression because it makes room for an exotic, menacing guitar melody, one that adds an element of sinister seductiveness to an otherwise ravaging storm of sound. The band also give the song a glorious send-off with a screaming whammy-bar solo.

The second one, “Hate Within”, is a bit less marauding and a bit more horrifying in its atmosphere, but no less capable of smashing bones to smithereens. It’s a lurching, stomping monster that oozes desolation and despair. The eerie solo in the song is chilling, and then becomes a paranormal spectacle. When the bells of doom toll near the end, the song leaves no doubt that all hope is futile.

Meanwhile, “Pestilence” is a jubilant romp, with a high-voltage pulsing riff and plenty of darting and swarming fretwork that keeps the assaulting energy high, and of course the kind of clobbering rhythm-section work, crazed soloing, and howling vocal intensity that make today’s premiere so electrifying.

With their roots extending back to 1989, and their early demos and other recordings in 1990 and 1991, Toxaemia can legitimately be considered part of the pioneering sound of early Swedish death metal, but because they’ve been away for so long they’re not a household name here in 2020. On the other hand, it’s obvious that all those lost years haven’t extinguished the passion. As Emanzipation Productions correctly describes the new album, it sounds like it was “written and recorded with the hunger of someone working on their debut but with the experience of veterans”.

You can pick up the album now on CD, LP, and digital in anticipation of its November 20 release: