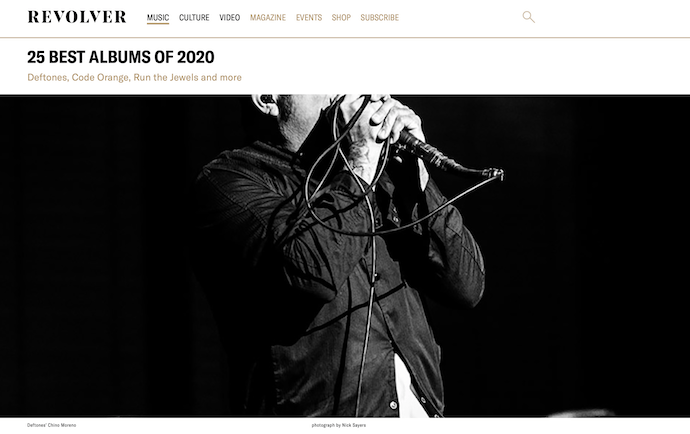 Of course, as soon as you see the words “popular culture” you know those lists aren’t going to devote too much attention to the kind of music we cover at NCS. But it’s still amusing, and sometimes even edifying, to get a glimpse of what these “taste-making” organs are telling the above-ground world are the year’s best metal releases.

Last week Revolver magazine published their list of “The 25 Best Albums of 2020” on-line. Revolver claims that “millions of passionate consumers” visit their website and view their videos across desktop and mobile; that the print edition is the “biggest hard-rock and metal magazine in North America,” with a subscriber base that’s three times larger than the “next biggest U.S. metal print publication”; and that they have a “highly engaged social following with over 1B impressions per month across Facebook, Instagram and Twitter.”

In perusing this list there’s a temptation to respond with snarkiness. But that’s not really my style. In addition, if you happen to be unfamiliar with Revolver, you’ll notice from one of those quotations that they cover hard rock as well as metal, which will be equally evident from a perusal of this new list. And of course they triangulate their choices to their own readership, and perhaps to advertisers who pay their bills. So it’s not really a revelation or a fair criticism to note that the list is unlikely to open your eyes to some new underground metal gem you haven’t heard of.

In further defense of the list (albeit a mild defense of a list I find generally useless, given my tastes), I’ll say that the descriptions which accompanied each album choice at Revolver did titillate my interest in a few things I either didn’t know existed or had consciously ignored. For example, I’m a fan of Chelsea Wolfe and had no idea that Miss Piss is a collaboration between her and her friend (and current go-to drummer) Jess Gowrie. Revolver describes it as “channeling the gnarliest, noisiest grunge-sludge sounds of the Nineties, plus plenty of the era’s riot grrrl attitude”. I’m going to give that one a shot.

I’m also tempted by a few other things I had neglected, including Ghostemane, Loathe, and Killer Be Killed, and a few others I’d never heard of, though there’s no way in hell I’m going to believe that an album by Bring Me the Horizon (which sits at No. 7 on the list) “sounds like the future of heavy music”.

I also did see some welcome names on the list, including Imperial Triumphant, Necrot, Gulch, and Spirit Adrift, but on the whole I guess it’s more a cultural artifact for me than anything else.

17. Mr. Bungle – The Raging Wrath of the Easter Bunny Demo

16. Nothing – The Great Dismal

5. Loathe – I Let It In and It Took Everything