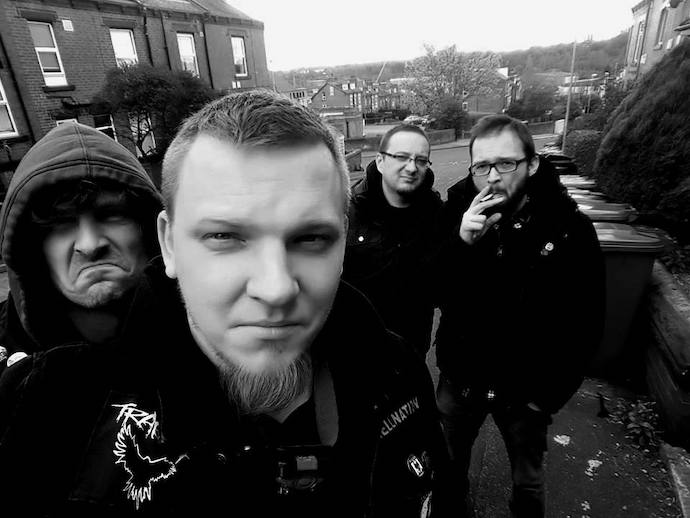 Since Herida Profunda‘s inception in 2012 in Poland, they’ve amassed a host of gigs throughout Europe, including numerous festival appearances, and have assembled a discography that includes a self-titled debut release in 2013, a 2015 split with UK’s Hellbastard, a 2017 split with UK’s Hello Bastards, and In Fear We Trust — a three-way split with Psychoneurosis and Suffering Quota in 2019. Obviously, the relocation of the band’s vocalist Edi to the UK in 2014 didn’t prove to be an obstacle.

The band are now at the point of completing work on a new album named Power To the People, which will be released on tape and vinyl in early 2021 via 783punx (UK), 7DegreesRecords (GER), Heavy Metal Vomit Party (SLO), To Live A Lie Records (USA), and Give Praise Records (USA). What we’ve got for you today is the premiere of a lyric video for a single from the new album named “Hunters Will Be Hunted“.

“Hunters Will Be Hunted” was first released as an extremely limited floopy disc (only 27 copies) via Hasiok Records, but now everyone will get to be bulldozed by it.

Herida Profunda‘s brand of explosive grindcore ferocity has always been fueled by politically charged lyrics and themes, and this new track is no different. Lyrically (as you’ll see in the video created by Jakub Kielar) it’s a furious tirade against the practice of killing for sport.

Musically, the track is a vicious, rhythmically compulsive punk romper matched with ferocious death metal gutturals, but the song also erupts in mayhem, discharging incendiary screams, hyper-blasting drums, feverish bass, and demented, shrieking guitars. The song also descends into long, cold chord reverberations over maniacal drum fills, and explodes in one final paroxysm of violence in which the ferocious and crazed vocals engage in an enraged call-and-response.

For further news about the new album as it becomes available, keep an eye on the Herida Profunda FB page, and to explore their previous releases, visit them on Bandcamp.