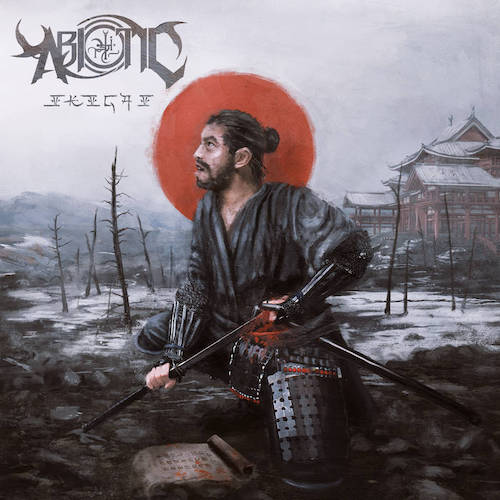 In the early years of this site, I closely watched and wrote about the meteoric rise of a South Florida band named Abiotic, who quickly vaulted from a couple of singles and a 2011 EP to the release of their 2012 debut album Symbiosis on the Metal Blade label. In considering that album I did my best (at length) to wrestle its mind-boggling escapades into words, but probably failed. With elements that appealed to fans of both tech-death and deathcore, and probably many people committed to mental asylums, the music (I wrote) was “intricately constructed and capably executed — a full-bore onslaught of brain-twisting technical pyrotechnics, munitions-grade explosiveness, and eerie atmospherics”.

Abiotic followed up Symbiosis with 2015’s Casuistry, which was a crusher, and still displayed lots of technical adventurousness but also moved in the direction of more melodic and catchier songs. And then Abiotic went silent on the recording front, a silence that has lasted for more than five years. But the silence has ended, because on February 12th the band’s third album Ikigai will be released by The Artisan Era — and it’s our pleasure to bring you a track from it today, a song named “Smoldered“, which is presented through a fascinating music video. 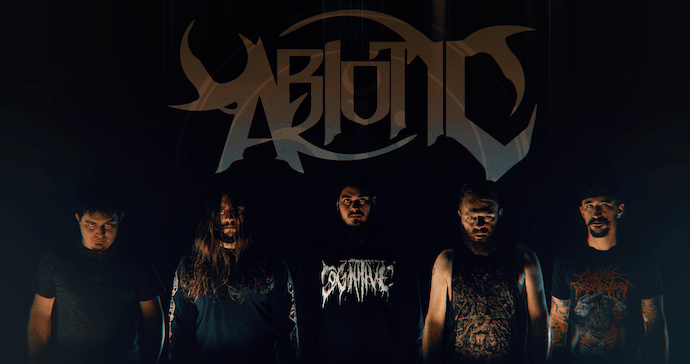 Given the significant span of time that has elapsed since Abiotic’s last album, it’s not shocking that the new one reflects changes. The line-up, for example, now includes drummer Tony Simone and bassist Kilian Duarte, in addition to founding guitarists John Matos and Matt Mendez and vocalist Travis Bartosek. Abiotic also enlisted an array of guests on the new record, including Trevor Strnad, Chaney Crabb, Brandon Ellis, Scott Carstairs, Jared Smith, and Jonathan Carpenter.

And the lyrical themes have changed as well. As John Matos has said about the new album, which was completed during the pandemic:

“The title Ikigai translates from Japanese as ‘a reason for being.’ Each song represents a different approach to that concept. After 5 long years, we decided that as much as we love albums about space and aliens, we wanted to write something that could be felt and that would be relatable, as we all struggle to find our reason to carry on in these trying times. Lyrically, this album tells so many stories.

“The cover art depicts a traditional Samurai committing seppuku and as the Samurai is bleeding out, he sees these lives, his future lives. Life as a trans man/woman facing intolerance, as an addict, as an abused child battling mental health, as an owl as it’s home is destroyed by climate change; an infinite amount of lives struggling, but persevering in their struggle. Tying it all together, he finds his purpose in that moment of connection before he passes away on that field in 16th century Japan.”

With the afore-mentioned changes have come some musical changes as well, some of them represented in the song we’re premiering today (which includes a vocal guest appearance by Chaney Crabb of Entheos). On the other hand, much of what led to Abiotic‘s rapid ascent a decade ago is still present and accounted for — they’ve just gotten better at it, thanks to a step up in songwriting and even more razor-sharp execution.

“Smoldered” may be the song’s name, but it blazes. With the exception of a sudden and surprising instrumental interlude that’s musing and seductive, the band unleash a full-throttle, adrenaline-fueled thrill-ride, one that’s packed with hair-pin twists and turns. While the vocals are unrelentingly ferocious (and barked at a speed that manages to keep pace with all the instrumental extravagance), the band deliver an experience that’s not merely technically eye-popping but also emotionally gripping, mentally engaging, and vigorously bone-smashing.

The interplay among the rapidly skittering, swirling, and darting fretwork and the rapidly shifting rhythmic patterns, coupled with sudden tempo changes, will keep you on your toes, as will the appearance of a mesmerizing guitar solo, burbling bass accents, and bursts of high-speed, highly weaponized groove. The music explodes in soaring, sunburst sounds, spins into deranged frenzies, becomes cold and cruel as well as mystical, makes room for progressive touches, and, as mentioned earlier, uses soft ringing notes to weave a brief spell before the head-spinning onslaught resumes.

Buckle your seatbelts and press play:

Ikigai was engineered, mixed, and mastered by Tony Simone at Zenbeast Media. The cover art described above was created by Caelan Stokkermans (known for his work with Soreption, Cattle Decapitation, and Fires in the Distance).

The Artisan Era will release the album on vinyl, CD, and digitally, along with apparel, and all of that is available for pre-order now. It recommends the album for fans of The Faceless, Gojira, The Black Dahlia Murder, Job For a Cowboy, and Rivers of Nihil.

Below you can also check out a video for the previously released album track “Souvenir of Skin“, which includes a guest appearance by Trevor Strnad.