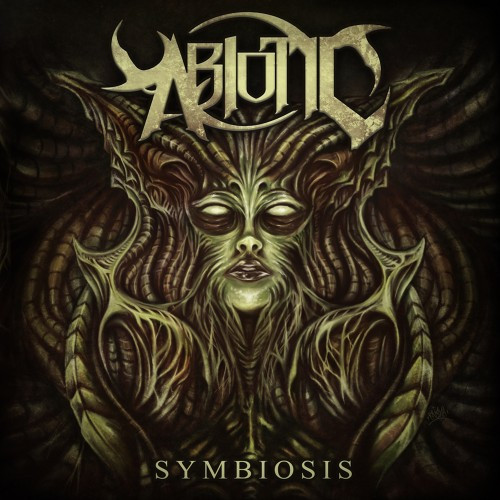 South Florida’s Abiotic have experienced a meteoric rise, launching themselves with a couple of singles and a seven-song EP in 2011 (A Universal Plague) and then signing with Metal Blade Records this year after being contacted by that venerable label out of the blue. In three weeks, Metal Blade will release Abiotic’s debut album, Symbiosis. It consists of “tweaked” versions of the seven songs from A Universal Plague plus three new songs.

The songs on Symbiosis follow an unrelenting pattern. The template is in fact so consistent that on a first listen the songs tended to merge together into one long sonic barrage that left this listener battered, bruised, off-balance, and with a head full of thoroughly scrambled wiring. Subsequent spins through this chaotic album allowed me to focus more on the variations among the songs, but in the end they still emerged as a fractal design in sound, with the highly intricate structures multiplying yet unfolding in fundamentally the same shape:

Blasting start/stop rhythms, with drums, bass, and rhythm guitar all firing in bursts like a heavy-caliber machine gun. Schizoid time signatures that change rapidly and unpredictably. Percussive riffs that jab and punch like a nail-gun in overdrive. Periodic atonal hammering in the low end, like concrete girders being wielded as hammers by robotic giants.

Through that maelstrom of hard-punching sound come spacey bursts of weird guitar arpeggios and shimmering, swirling, blazing segments of fluid sweep picking (or finger tapping), giving shape to a futuristic atmosphere. Strange, skittering electronic noises appear and then disappear, and a variety of other electronic effects, including channel-shifting, are applied to enhance the mechanistic vibe of the music. 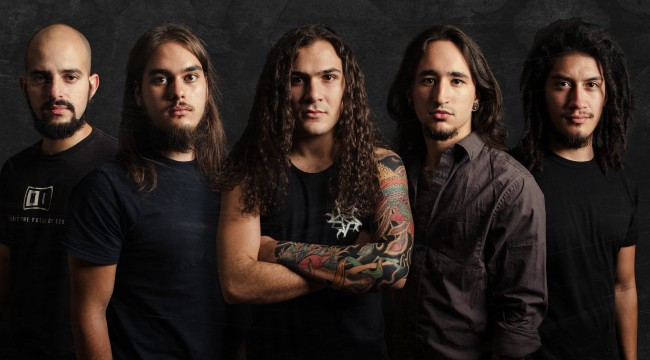 The vocals veer between deep, harsh roars and skin-peeling shrieks, with pig squeals in the mix, too.

And with few exceptions, everything flies like a bat out of hell, fingers manically setting the fretboards on fire as the dual guitarists and the bassist shred the shit out of their instruments and the drummer operating his kit like an overheated piece of artillery. (But don’t forget — though tightly integrated and precisely controlled, this whole blazing piece of complex machinery is diabolically unstable as it stops, starts, and changes tempo and meter.)

The melodies: Yes, there are some. They tend to appear unexpectedly as interludes, as in the cool-jazz instrumental break in “A Universal Plague”, the dark songcraft that seeps into the back end of “Hegira”, the brief melodic passage that rears its head in “Facades” (before being overwhelmed by a barrage of pile-driving riffage), and the chiming guitar sounds that leaven the chaotic brutality of “The Graze of Locusts”. Usually, when those brief melodic guitar passages appear, a rubbery bass tone rises pleasingly in the mix.

But although the music isn’t atonal, these aren’t songs you’ll walk around humming to yourself after listening to the album. With those exceptions mentioned above, the melodies are too dissonant and too freakishly variable to be called “catchy” by very many listeners. Instead, the music is more to be experienced in the moment as it wrecks havoc on your skull and twists your neurons into unrecognizable shapes.

Calling Symbiosis straight-up “technical death metal” probably goes too far. In its instrumental acrobatics, it certainly shares genetic material with bands such as Spawn of Possession, Obscura, and early The Faceless. Yet the vocal style, some of the clanging, atonal riffs, and the presence of mosh-worthy breakdowns (though they’re few and subtle) establish kinship with deathcore. 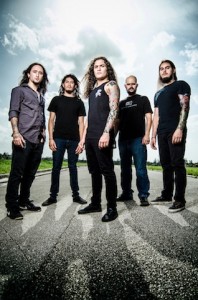 For that reason, died-in-the-wool tech-death aficionados and general deathcore haters may have a problem with Symbiosis. Conversely, I predict that deathcore fans are going to eat this up and come back growling for seconds — it will have a familiar ring to them, but the level of technical proficiency and songwriting intricacy on display will prove to be far beyond the standard fare.

As for me, I enjoyed the album and I think it’s a very promising debut. Intricately constructed and capably executed, Symbiosis is a full-bore onslaught of brain-twisting technical pyrotechnics, munitions-grade explosiveness, and eerie atmospherics.

As Abiotic matures, I’m hoping for (and expecting) that their next release will display greater variability and more individuality in the songs and less of the patchwork quality that I sometimes found in the chaotic juxtapositions in the music. Having said that, this is a young band with a potentially very bright future and one I’ll be watching closely.

Symbiosis will be released by Metal Blade on October 23 and can be pre-ordered here.

Here are two tracks from the album — “To Burgeon and Languish” and the riveting official video for “Vermosapien”, previously featured here at NCS:

Abiotic are in the middle of a tour with Sea of Treachery, Float Face Down, and The Burial. Here’s the remaining schedule (with additional post-tour dates also included): 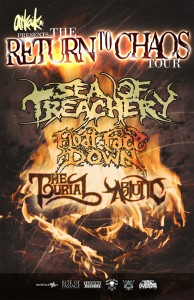