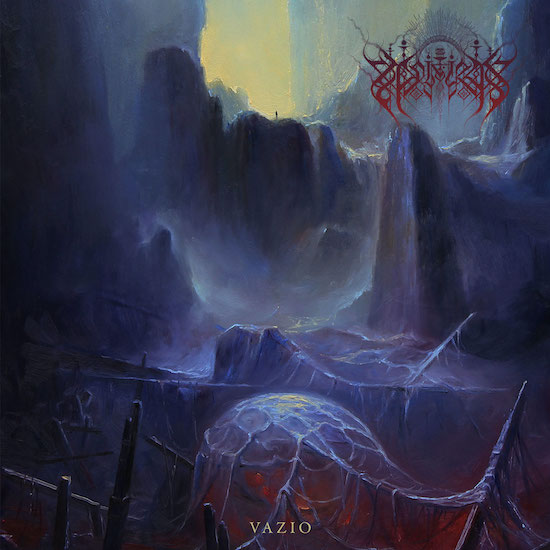 Yet another instantly recognizable painting by Mariusz Lewandowski has appeared on the cover of a metal album, this time the debut full-length by the Portuguese band Sepulcros. But as imposing and chilling as the painting is, it only hints at the immense, terrifying power and world-ending majesty of the intensely atmospheric music that Sepulcros have created within Vazio.

Harnessing the soul-shaking forces of death and doom metal, and adding the ferocity of black metal, Sepulcros have created an experience that makes a deep impression, though one that most definitely is not for the faint of heart.

Vazio is set for release by Transcending Obscurity Records on March 12th (assuming humankind lasts that long), and as a spine-tingling sign of what it holds in store we are today premiering a video for a ravishing album track named “Hecatombe“. 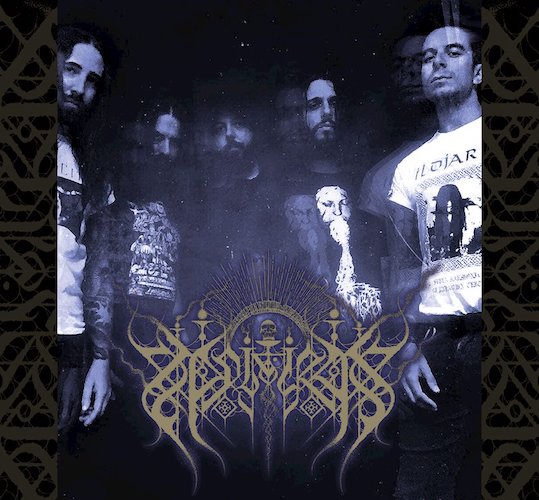 “Hecatombe” gradually builds toward towering heights of frightening intensity, and once it completes that ascent there is no real reprieve until the brief, shimmering, celestial tones that usher the song to a close. From haunting chants it moves into a growing storm of thunderous percussion, dissonant and distorted chords, and cavernous growls — and from there into raging tumult. The drums hammer like over-driven pistons, the vocals become a screaming madness, and the riffing soars like apocalyptic fires in the heavens.

The song’s crushing immensity and sense of mind-fracturing terror are near-overpowering. Even when the drumming becomes less maniacal and more metronomic (though no less skull-splintering) and the music heaves rather than harrows, it’s a frightening experience, thanks in part to the wide-ranging but completely possessed vocals and the intense feelings of doom and despair that saturate the melody. The song looms like a massive pitch-black monolith — until it explodes again, cutting great swaths of devastation.

Accompanying the terrors of the music, the video (filmed and produced by Ivo Martins) is mysterious and sinister, and in its slow-motion movement creates a contrast with the typhoon-like cataclysms within the song.

“Hecatombe” is the second song to be revealed so far from this new album. The first one was the title track, also presented through a video, and it reveals other dimensions of Sepulcros‘ sound. While the vocals are just as blood-curdling as in “Hecatombe”, the drumming just as explosive, and the low-end frequencies just as tectonic, the music proceeds at the pace of funeral doom and leaves a trail of misery and wretchedness in its wake — that is, until it erupts in paroxysms of frenzied lunacy or seethes in mortal agony. Coupled with “Hecatombe”, “Vazio” marks Sepulcros as a band with an unusual talent for creating severe emotional disturbances through sound, with ruinous intensity.

Transcending Obscurity is making extravagant use of the extravagant cover art created by Mariusz Lewandowski, as you’ll discover by exploring the various physical editions and apparel that are being offered for Vazio via the links below. Pre-orders are open now.