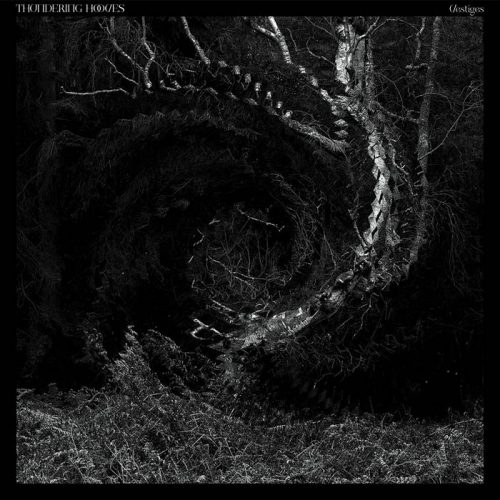 (We present Andy Synn‘s review of the debut full-length by the UK band Thundering Hooves, which was released on January 5th.)

What’s that? Another killer debut from a brand new band helping kick off the new year in style?

Apart from (and as well as) having a great name Thundering Hooves have a lot going for them on their dynamic debut album, Vestiges, which confidently positions them as the UK’s answer to Necrophobic.

Over the course of six rugged, rivetingly infectious tracks, the British duo deliver an impressively balanced and bombastic blend of raging riffs and raw, venomous vocals all topped off with an array of epic melodies and anthemic hooks, inspired as much by the works of seminal early extremists such as Dissection and Dismember as it is classic icons like Black Sabbath and Judas Priest.

From the savage, sinister (and seriously catchy) strains of opener “The Doomway” to the cathartic climax of the tumultuous title-track, Vestiges delivers precisely thirty-three minutes of something the band themselves like to call “Black Heavy Metal of Death” and hearkens back to an earlier, simpler time, a time when the boundaries between styles and sub-genres were perhaps a little less dogmatic and rigidly defined than they are today.

As a result, while the foundation and general feel of the album is definitely located within the sphere of Black Metal, there are also threads of Doom and Death, Trad and Thrash, and more, woven into the band’s DNA, making for an incredibly heady brew that will likely appeal to a wide variety of listeners for a number of different reasons, yet never feels forced or calculated or as if it’s purposefully playing to the crowd.

Compare, if you will, the none-more-grim grooves of “Rex Nemorensis” (which gives off some major Rebel Extravaganza/Volcano-era Satyricon vibes) to the proto-Doom, pseudo-Black stomp of “Goatswood”.

While each of these songs clearly focusses on a different facet of the band’s sound there’s never a sense that they’re not, ultimately, drawing from the same well of influences and inspirations, and it’s a testament to the obvious care and attention to detail involved that, no matter how far they may roam, the duo always seem to find a way – such as the sudden increase in blasting intensity and blackened aggression during the latter track – to connect back to the band’s Black Metal roots.

Above and beyond all this though is the simple fact that Vestiges is just an exceptionally well-written and shamelessly catchy album too, particularly during tracks like the insidiously melodic “Mara” or the thrashier, deathlier “Pallid Gaze”, whose burly riffs and punchy hooks mark it out as both the heaviest, and potentially catchiest, cut on the entire record.

So if, as I’m sure many of you are, you’re looking for a fresh start and something to really help kick 2021 into gear, then make sure to pick this one up ASAP. It’s not just a damn fine record in its own right, but it’s also a welcome reminder of why we all fell in love with the darker side of Metal in the first place.