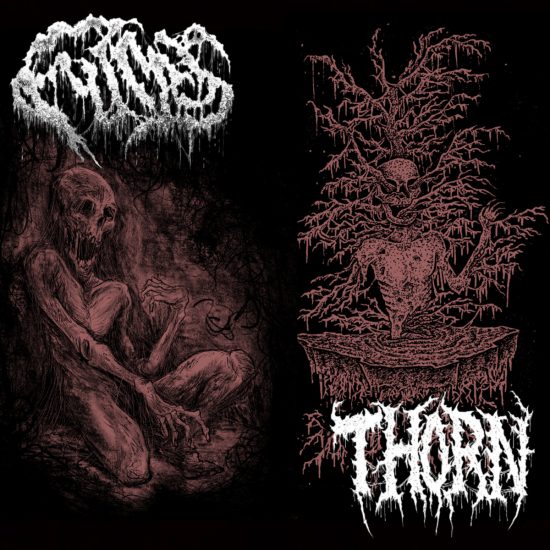 On January 22nd a consortium of labels — Gurgling Gore Records, Life After Death Records, and Cavernous Records — will release a tremendous split by two fearsome and frightening North American death metal bands: Thorn from Phoenix, Arizona, and Fumes from Toronto, Ontario. Each band contributes two tracks to this experience in crushing audio horror, and today we’re premiering one of them by each band.

Thorn is the solo project of Brennen Westermeyer, a musical vehicle dedicated to the creation of cavernous, ominous, and dreadful death metal. Thorn made its advent last year with an EP entitled The Encompassing Nothing, and for this new split Thorn recorded two songs — “Eclipsing a Dying Sun” and “Iron Sharpens Iron“. It’s the second of those which we present today. 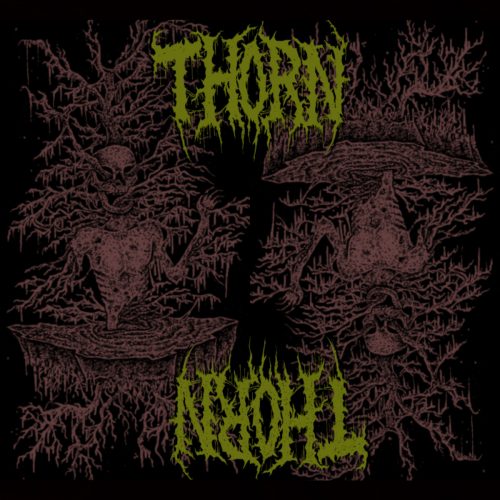 “Iron Sharpens Iron” is a mauling combine of gruesome, writhing riffage, pummeling percussion, and grotesque guttural discharges. Freakish string mutilations squirm through pile-driving percussive violence, and then erupt in boiling flares of soaring but unnerving sound. The song also twists into a tapestry of eerie ringing arpeggios and devolves into a choking miasma of vicious chords and growling bass tones. Chilling bell-like peals reverberate above tumbling drum blows and the imperious pronouncements of those cavernous roars.

All in all, the song succeeds in creating an amalgam of crushing brutality, freakish mayhem, and eerie supernatural frightfulness.

Fumes is another relatively recent project, one that combines the ruinous talents of instrumentalist and songwriter Daniel Bonofiglio (Gutvoid, Grotesque Mass) and vocalist Brendan Dean (Gutvoid, Simulacra). Like Thorn, Fumes also made its advent in 2020, releasing a pair of EPs entitled Within Mental Ruins and Towards Degradation. This new split includes two of their creations, “The Eremitic” and “To Remain Eroded“. We’re presenting a premiere stream of the first of those.

The earth-shaking impact of “The Eremitic” is immediate. It brings to bear titanic lumbering and stomping heaviness, augmented by poisonous, python-like chords and shrill, quivering and screaming arpeggios. The depth-charge detonations of the bass are punishing, and the drumwork is skull-fracturing, while the abyssal growls are gargantuan and monstrously ugly. As the song evolves it continues to intertwine titanic, bone-smashing weight and bizarre, squirming melodies, unpredictable percussive outbursts and strange, unsettling guitar reverberations.

For a song that’s so ruthlessly and brutishly pulverizing, it’s also hallucinatory, like a trip through an otherworldly asylum.

The cover art for Thorn’s side of the split was created by svchislife, and the Fumes art was made by GruesomeGraphx.

Gurgling Gore will release the split on limited-edition cassette tape featuring a printed slipcase outer over a black-opaque norelco case with lyric insert, and brown-tinted cassette tapes with white pad print. All preorders include an exclusive woven patch featuring the split’s gruesome artwork. CD editions will be available through Life After Death Records and Cavernous Records.