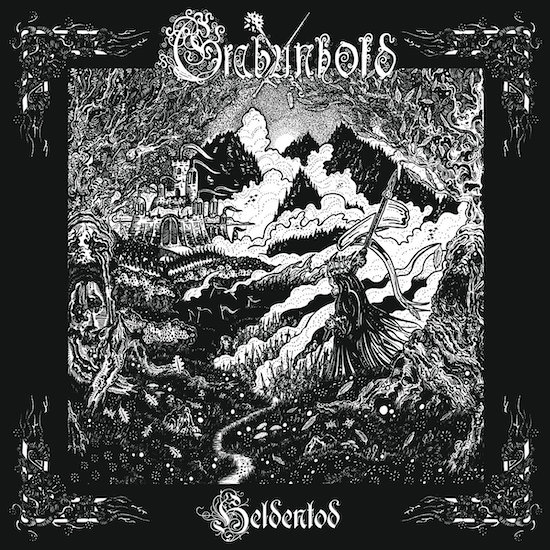 Take a good look at the cover art for Grabunhold’s debut album Heldentod, because it provides a few pertinent clues to the music. In elaborate fashion, the drawing depicts a blending of the supernatural and the medieval. A castle looms in the distance, banners flying in a cloud-cloaked mountain fastness. In the foreground a hellish king, surrounded by ghastly creatures emerging from the earth, gazes over long columns of dread warriors marching toward that distant fortress. And above it all, a crossed sword and mace adorn the ornate lettering of Grabunhold’s name.

Like the fantastical cover art, Grabunhold’s formulation of black metal is itself a blending of the supernatural and the medieval. It is itself cloud-cloaked and majestic, warlike and elaborate. It often rings with the resonance of ancient music, and it reaches spectacular heights, but it is also persistently shadowed by dread and sorrow. It merits the well-worn term “epic”, but there is an earnestness and sense of devotion in the music that prevents it from sounding calculated or “cheesy”. And its multiple facets are so memorable that it’s likely to have staying power over years to come.

Thus it’s with considerable pleasure that we present a full stream of the album in advance of its January 22nd release by Iron Bonehead Productions — preceded (of course) by a bushel of additional words. 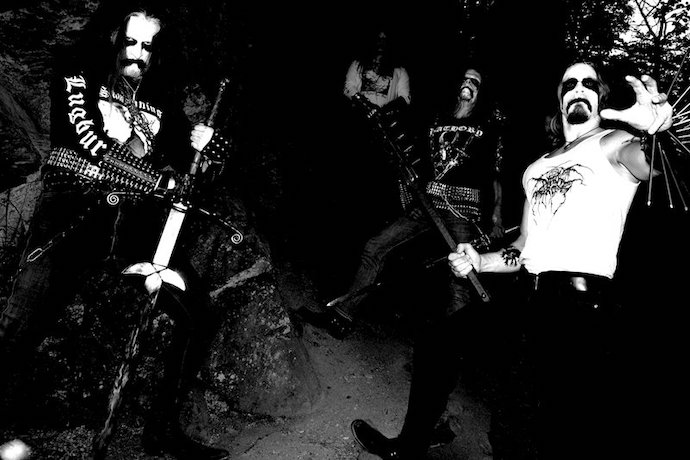 As one way of preparing you for the experience of Heldentod, let’s consider the opening track and the closing song, which are the album’s longest and most multi-faceted offerings.

A melancholy acoustic guitar harmony, performed against a backdrop of distant thunder, provides the overture to the opener “Wolkenbruch über Amon Sul“, which then suddenly erupts in blast-beat strafing and bleak, cruel riffing, joined by scalding goblin vocals. The drumming shifts to a punkish gait, and the riffing flares into a deranged, anguished sound. The music becomes almost cinematic in its cascades of grim sound, but pierced with feverish leads that vibrate in a semblance of madness. When the pacing slows, the guitar moans a sorrowful and soulful melody, but the music also swings and whirls in contagiously thrilling fashion, and becomes a manifestation of blazing grandeur. (Singing will be heard as well.)

The closer, “Der Einsamkeit letzter Streiter“, begins with the sounds of trudging steps through muddy earth, and perhaps the sheen of a sword being drawn, followed by marching chords (which almost sound like massed trumpets) and a military snare beat. A flickering guitar lead arrives, and it sends a flood of glorious electricity into the music. As the song continues to evolve, the vocalist expels savage growls, the drums hammer, and the riffing takes on a bleak and beleaguered countenance — yet the wondrous ringing leads, which themselves change in their moods, continue to lend the song a heart-pumping, heart-swelling spirit, eventually joined by heroic singing. The ending refrain, in particular, again brings medieval fantasies to mind — and it may be a long time before the sorcery of those brilliant ringing tones leave your mind.

In between those two remarkable tracks Grabunhold provide a changing experience, and all together the songs seem to narrate a musical saga. Within “Hügelgräberhöhen“, the guitars go off almost like a fanfare of horns, in keeping with the music’s brazen and blazing atmosphere — though the spectacle is a dark one. Feelings of desperation course through the near-symphonic sweep of the music, even though the whirling leads channel a kind of fierce joy.

The medieval aspects of the music don’t dominate every track, but they are certainly front-and-center in “Trommeln in der Tiefe“, which is a haunting and funereal organ harmony accompanied by primitive drums and solemn spoken words. The resonance of ancient music comes through again in the acoustic-guitar duets that open and close “Morgenröte am Pelennor” and in the riveting guitar arpeggios in “In tiefen Verliesen“, which give that song not only a striking vibrancy but also a feeling of anguish.

And that underscores a central feature of Heldentod: On the one hand, Grabunhold have a talent for creating passages of soaring splendor and panoramic sweep, and an equal talent for spinning you around in whirls of melodic ecstasy. On the other hand, the clouds are never far away, and Grabunhold reveal an equal talent for seamlessly bringing in an array of dark and devastating moods. In “Fangorns Erwachen“, for example, a galloping drum charge leads into blasting, and chords that sound like war horns transform into splendid swirls, but the song also morphs into sounds of turmoil, grand tragedy, and ultimately, heart-break. And although “In tiefen Verliesen” brings remarkable liveliness, it also harbors sensations of deepening tension and the apprehension of doom.

I’ve not yet mentioned “Morgenröte am Pelennor“, but it might be the most memorable of all the tracks, due in part to the gripping role played by extravagant choral singing. The voices ascend in their fervor, just as the music does — but again the storm clouds roll in, creating moods both ominous and fearful, desolate and hopeless, alternating with those passages of epic wonder.

Well, enough with the words (probably much more than enough). The digital edition of Heldentod is available for pre-order now. Iron Bonehead will also release the album on CD and vinyl LP formats.

One Response to “AN NCS ALBUM PREMIERE (AND A REVIEW): GRABUNHOLD — “HELDENTOD””