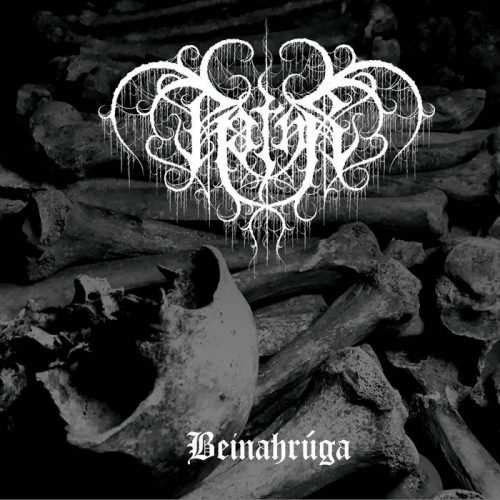 Manipulating and intertwining ingredients of black metal and funeral doom, the multinational band Nathr have pronounced themselves ready to open the graves of the old Viking capital of Nidaros and to make us imagine what will come forth. They proclaim their inspiration in these words: “We start to dig up the somber emptiness of our souls, to express the grievances of life.”

Nathr only began last year, and took shape as the union among Italian vocalist/lyricist Nathas (Funeral Harvest), the Dutch musician Northr (Funeral Harvest, and the dark ambient project Northr), who performs guitars, bass, and synths, and the Norwegian drummer Ond (Funeral Harvest, Keiser). Their first release is an expansive four-track EP named Beinahrúga, which seems to be an Old Norse word for a pile of bones, and it will be released through Signal Rex on February 12th.

What we have for you today is a full stream of Beinahrúga, preceded by some thoughts about the disturbing experience of it. 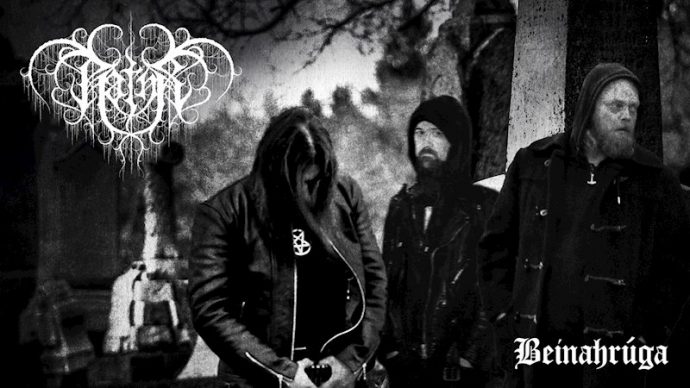 The music carries us into crushing depths of near pitch-black darkness, evoking powerful feelings of dread and wretchedness. The realms created by the sounds are not completely lightless, but what shines within these freezing abyssal crevasses is an unnatural gleam — a source of fear and perhaps a glimpse into the domain of wraiths.

The beginning minutes of the title track very effectively put a chill on the skin, through the swelling sound of eerie, windswept ambience, deep percussive booms, yowling horns, and frightening screams. Eventually, slow, corroded guitars and a cavernous bass begin to drag and moan, and when a drum rhythm surfaces, it’s heavy and slow. The feeling of oppressive misery is saturating, and the serrated-edge howls sound strangled and vicious. Shrill vaporous tones maneuver through this otherworldly death march like sonic ghosts. The song comes close to creating a trance state, but is perhaps too hopeless and disturbing to really do that.

What might be distant solemn chants ring through another swirl of cold ambience at the outset of “Tenebra Mundi”. Nathas‘ shrieks again send shivers down the spine, joined by the shivering distortion of the guitar and the methodical crushing impact of the bass and drums. Deep chants and sheets of gleaming iciness emerge, along with sensations of wailing frightfulness. All these ingredients create an atmosphere of vast desolation and wrenching pain. Glacial in its pacing and glacial in its temperature, the song claws at the listener’s sanity as it claws its own way through stone and earth into a terrible abyss

As in the preceding tracks, “Into the Void” begins with subzero ambient tones and unidentifiable but disturbing tonal excretions. Here, the drums batter in a militaristic pattern as the bass marches along and weird glimmering tones rise up and cascade, creating an almost celestial quivering light. There’s a feeling of tension in the music, but echoing cavernous pronouncements and gravel-toned chords generate a deeply doomed mood as well. At the end, the synths fashion a brief moment of grief-stricken beauty.

Gigantic crushing tones, widely spaced within a preternatural mist, pave the way into the closing track, “Vado Mori”, which becomes a crawling monstrosity. As Nathas vents his terrorizing vocal ugliness again, momentous chords strike and reverberate, creating an atmosphere of abandonment and fear — and a deep, distorted, demonic vocal recital creates a further reason to be fearful as the song casts the listener into a netherworld of heartless spirits and unending punishment.

Beinahrúga is available for pre-order now in advance of the February 12 release by Signal Rex, but you need not wait to become immersed in its nightmarish soundscapes. Steel yourselves and press play below.