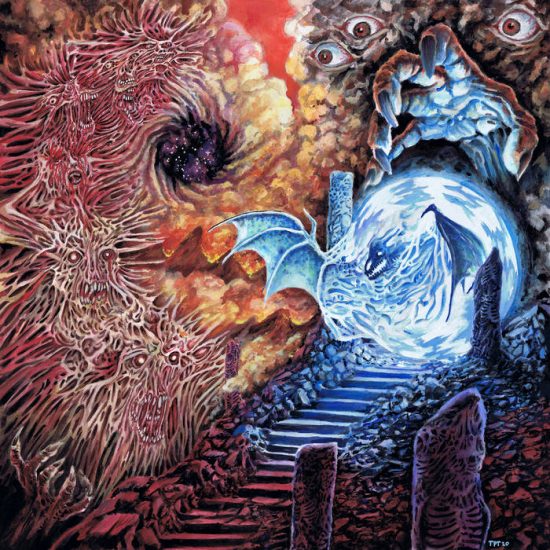 (Here’s Gonzo’s review of the unexpected new album by Arizona’s Gatecreeper, which was discharged by Closed Casket Activities on January 13th.)

From the endlessly bizarre timeline in which it’s being released to the sheer out-of-nowhere, smack-you-upside-the-head-and-run surprise of the release itself, I think it’s safe to say nobody saw this album coming.

And maybe that’s the point. After all, bands like Gatecreeper don’t really entertain much in the way of being subtle. Their bludgeoning songwriting, pounding rhythm section, and Chase Mason’s unearthly howl have solidified the band’s sound as instantly recognizable in the death metal underground.

And even though those elements are as present as ever on An Unexpected Reality, this sonic blowtorch falls a little short of the decimation it wants to inflict. 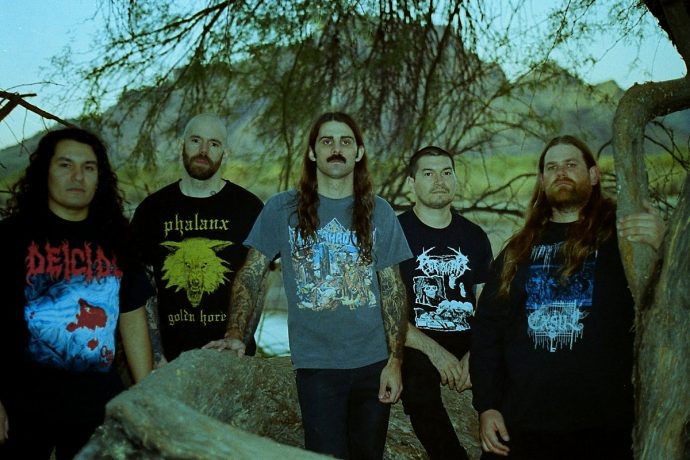 With seven songs that span an average length of about a minute each, the first side of this album feels like truncated Gatecreeper disguised as grind. Opener “Starved” gives exactly zero fucks about wasting any time, launching an all-out assault that destroys everything in its path and ends just a minute after it starts. The same story continues with “Sick of Being Sober” and “Rusted Gold,” and it’s not until fourth track “Imposter Syndrome” that the band offer a brief respite from the continuous three-minute chokehold it ruthlessly puts you in.

There’s nothing inherently wrong with taking the scorched-earth approach to songwriting and just sandblasting the living hell out of anyone who dares to lend their ears, but the first seven songs just seem to end before they even get started here. It’s not like Gatecreeper don’t know how to expand on an idea or take a riff and absolutely destroy you with it, as their 2016 output in Sonoran Depravation will attest. The problem with An Unexpected Reality is that it just seems only to hint at what they’re capable of, right up until track #8 and album closer “Emptiness.”

And that track, as it turns out, is worth talking about. Clocking in at just over 11 minutes, it’s a total behemoth that transcends genres. It dives into a bottom-heavy death/doom hybrid in the first half, crushing you with the force of the Mariana Trench turning a nuclear submarine into a tin can. It then deftly switches gears and turns into a searing blackgaze assault that sees the band step out of their comfort zone and deliver something truly remarkable. Truth be told, “Emptiness” makes the rest of this release feel like preamble and nothing more.

All told, the verdict on this one is tough to decide on. If Gatecreeper’s aim was to churn out a blistering give-no-fucks album that surprises as much as it decimates, then they’ve only partially succeeded. “Emptiness” is a towering achievement that shows the band’s creativity on overdrive, but the fact that it’s paired with seven other forgettable salvos is a polarizing duality.

Maybe I’m missing the point here, or maybe I’m just overthinking it. Whatever it is, An Unexpected Reality is just as unexpected as it is confounding.

2 Responses to “GATECREEPER: “AN UNEXPECTED REALITY””