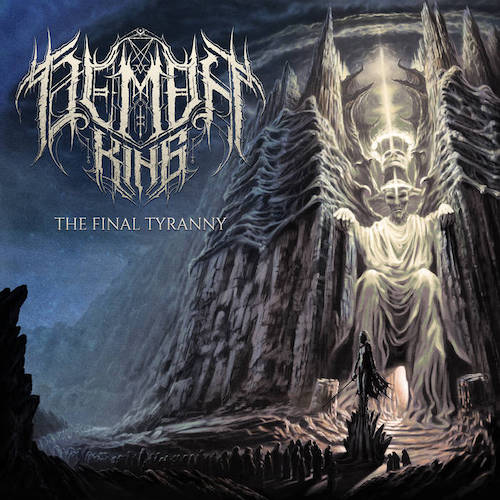 What can you do with an 18-minute block of time today? Wash those dishes that have been in the sink since January? Ponder whether you should start showering more than once a week? Beat your head against the wall for wasting four hours watching that dull-as-dishwater Super Bowl? Rush through sex like you’ve got somewhere else to be?

We’ve got a better idea: Listen to Demon King‘s debut EP The Final Tyranny. Though to be fair, the odds are high you won’t stop with just the one listen. 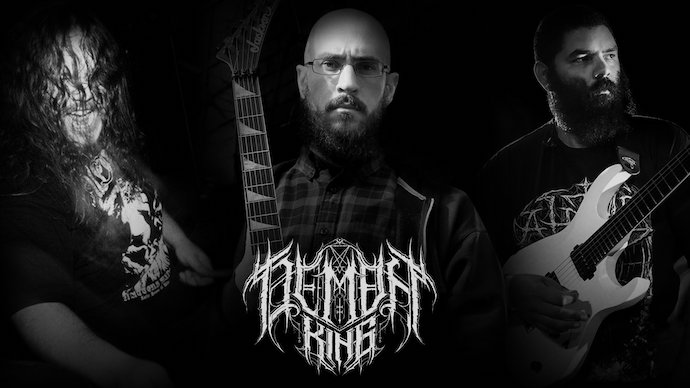 Maybe you need some convincing, if you’re really hyped about washing dishes. Lets start with the fact that the Nashville-based line-up of Demon King consists of original Enfold Darkness guitarist Matt Brown (who performs vocals here as well as all guitars), Malcolm Pugh (Inferi, ex-Enfold Darkness) on bass, and Jack Blackburn (ex-Inferi, ex-Vital Remains, ex-Enfold Darkness) on drums. And if the prospect of listening to what all those technical virtuosos can do when they set their mind to amalgamating technical death metal, black metal, and melodic death metal, consider these thoughts:

All four tracks do display the kind of high-speed instrumental extravagance you would expect from that line-up — rapidly darting and swirling riffs, bullet-spitting drumwork, nimble bass lines, and brilliantly fluid and flickering solos that channel both sorcery and spectacle. But there’s more going on here.

The songs are also undeniably vicious, thanks in part to Matt Brown‘s scorching vocal demonism. “Tyrannical Reign of the Deceiver” further incorporates eerie ringing melodies that slowly slither and sway, jolting start-stop rhythms, and brief spoken words, while after a chilling ambient intro “Invoking the Spirit of Chaos” does indeed manifest episodes of deranged, searing chaos, as well as symphonic accents with an ominous sweep and grim arpeggios that exhibit serpentine menace. “Transmutation of the Artilect”, on the other hand, sounds wild and joyful, animated by soloing that dances and soars, but it also drifts into gleaming realms of wondrous mystery.

To close this too-short EP, “The Watcher, Wreathed in Flame” blazes like a feverish bonfire, while also seething like a cornered carnivore, jabbing like an overdriven jackhammer, and booming like mortar-fire. It also includes a jazzy, proggy interlude, rapidly followed by a spasm of hyper-speed, needling fretwork and cascades of occult melody, closing with moody ringing tones.

“For this initial release, I wanted to showcase what I felt were the best elements of my writing during my time with Enfold Darkness… but stepped up and refined. In many ways, it’s a continuation of that early sound. It’s all fast and thrashy, yet lush with melody. Lyrically it’s similar too, with end-times eschatology being a major focus.”

The Final Tyranny will be released by The Artisan Era this coming Friday, February 12th, and it’s available for pre-order now. It features cover art by Justin si-Set Abraham (known for his work with Equipoise, Inanimate Existence, Singularity, and more).

One Response to “AN NCS EP PREMIERE (AND A REVIEW): DEMON KING — “THE FINAL TYRANNY””