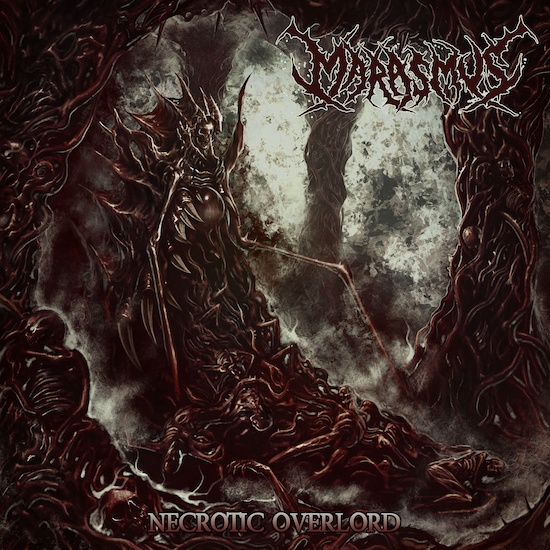 (NCS contributor Nathan Ferreira prepared the following introduction to our premiere of a song from the forthcoming third full-length by Kansas City-based Marasmus, which is set for release on March 20th by Transcending Obscurity Records.)

The “old school vs. new school” debate in death metal is a dead horse that’s been flogged repeatedly ever since I’ve been an enthusiast of the genre. On one side you’ve got the classic death metal camp, firmly grounded in some of the old Swedish and Finnish textures and modern bands that recreate their primitive, pioneering nature. On the other side you’ve got the modern extremophiles, lovers of all things technical and slamming. Death metal is around three decades old, and within those 30 or so years are two distinct phases of music, each with their own set of enduring, timeless classics. It’d be near-impossible for me to pick one or the other if I had to.

Fortunately, Marasmus figured out an even more novel solution: why not have both? 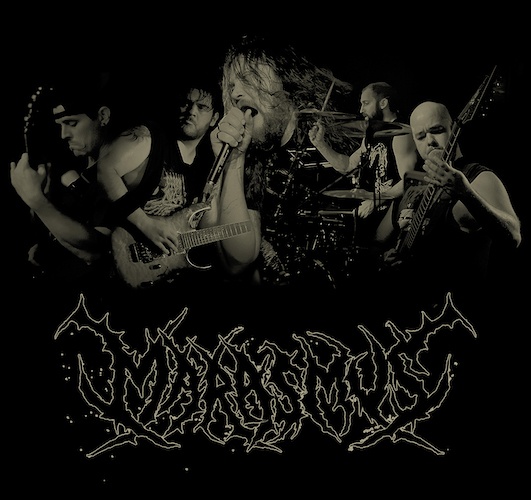 Their new album Necrotic Overlord was made by a group of artists who have a deep understanding of each subgenre of death metal and what it brings to the overall mix. The common influences that many modern bands draw on tend to be the obscure, unique groups who aren’t truly representative of death metal on the whole: Demilich, Autopsy, and even phases of Morbid Angel, who were pretty weird at times for how influential they are.

Marasmus, on the other hand, seem to be drawing from more straightforward Floridian wells a la Deicide, Cannibal Corpse, and Vital Remains, less imitated in modern times. There just isn’t as much room to play around with the style, as it requires rigidity and focus to achieve its goal, but Marasmus have the chemistry and patience to pull off the razor-sharp tremolo attack convincingly.

This album wouldn’t have worked if it were just another ’90s throwback, though. What really sells Necrotic Overlord for me is how it mixes an effective yet under-utilized OSDM riffing technique with a modern, bludgeoning approach to delivery and songwriting, perhaps informed a bit by regional peers such as Origin. There’s a reason drummer Trynt Kelly is now working with Kansas-based brutalloids Unmerciful, as his aggressive yet insanely precise skinwork is a perfect fit for them. He brings the exact same approach to Marasmus, underscored by the fact that he’s been their lone drummer since the band’s inception. It just never lets up and turns even the simplest two-note melodies into catchy, destructive grooves.

We’ve got an exclusive premiere of “Insurrection”, the eighth track on the album. Since Necrotic Overlord is so consistent, it works as well as any other number to give you a little taste of what’s to come. Opening with a familiar, earworm death metal progression, it’s immediately kicked up a notch by Kelly’s pulverizing speed, and it unrelentingly barrels along, showcasing the abundance of stamina and energy that make up the streamlined force of Marasmus.

The song only eases up when it opens into low, sustained chords, giving a hint of dynamic to the rapid pummeling. The song shifts back and forth between those two modes for the remainder of the song, combining old-school melody with new-school brutality, with the throaty, decipherable vocals of Devon Ferrara giving each riff a powerful exclamation point.

The operative word I would use to describe this album is “efficient”. Necrotic Overlord feels fresh without pushing any boundaries to the breaking point or throwing gimmicks into the mix. This is 100% pure uncut death metal, with tight songwriting that feeds you barbed-wire riffing and curb-stomps you with grooves, all delivered with the surgical precision of seasoned veterans. Not a single moment on this album feels overlong or unnecessary. It doesn’t matter what style of death metal you normally prefer – you need to check this album out.

Necrotic Overlord is out on March 20th through Transcending Obscurity Records. The album features artwork from Rafael Tavares, who has also worked with Blood Red Throne, and was produced by Justin Bird. The album is recommended for fans of Suffocation, Depravity, Unmerciful, Hour of Penance, Nile, Revulsion, Abysmal Torment, and Verthebral.

One Response to “AN NCS PREMIERE: MARASMUS — “INSURRECTION””