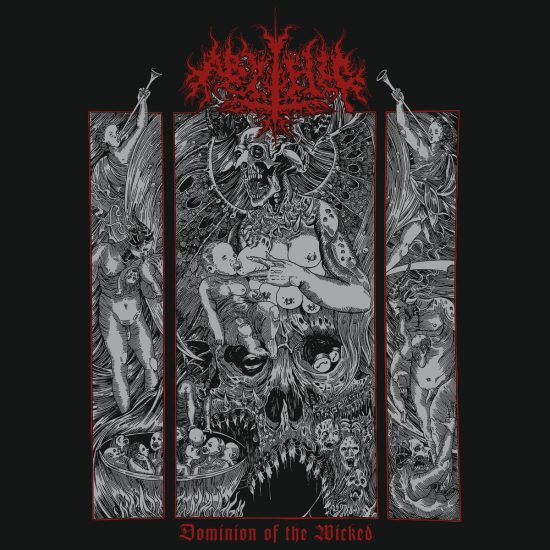 Iron Bonehead Productions has recently pushed back the release date of Abythic‘s third album to February 19th, but the more prolonged wait will be easier for fans to bear because today we are presenting a full stream of this momentous new record, the name of which is Dominion of the Wicked.

Informed by mid-period Bolt Thrower, Asphyx, Grave, and Pentacle, the album represents a more thorough-going embrace of crushing doom than this German band (now stripped down to a power trio) might have previously achieved, and certainly a more powerful (and sophisticated) rendering of haunted and harrowing atmosphere. All of the songs flow together, and as the band maneuver you through them you experience the dynamism of the band’s songcraft and their capacity to create a lasting spell, notwithstanding how frequently oppressive and horrifying the sensations often become. 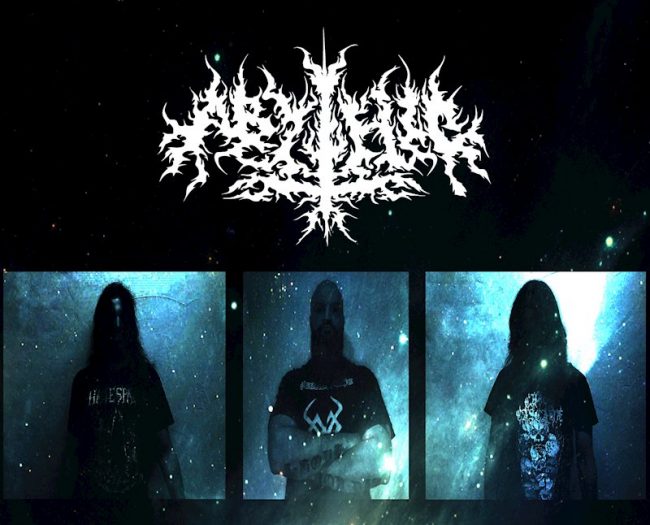 Abythic made the interesting choice to begin the album with by far its longest song, a nearly-15-minute monolith entitled “At The Threshold Of Obscurity”. Introduced by cold, morbid, queasy chords, eerie quivering notes, and solemn choral voices that morph into frightening growls, the song proceeds at a slow, stomping and lurching pace. This macabre processional is led forward through dank, lightless caverns by blood-freezing howls and methodically punishing rhythms, as the guitars ring out with a sound that’s both unearthly and infiltrated by rot.

The melodies moan and weep, creating moods of grief-stricken hopelessness, and the riffing also vibrates in a cruel fever. When the drums begin to batter and the vocalist screams, a feeling of derangement and calamity flares, yet chime-like notes also create an almost inviting presence of unearthly mystery as the song rises in a kind of horrid grandeur — and the solo that surfaces near the end is both soulfully fluid and screaming.

The clarity of the ringing leads, juxtaposed against the oppressive, crushing murkiness of the bass and the rhythm guitar and the measured, punishing impact of the drumming, remains a fixture in the album’s three remaining songs, as does the terrifying impact of the gargantuan growls and the occult menace radiated by the choral chants. Abythic rarely accelerate, and rarely shine a light or provide heat within the cold, crumbling, corpse-strewn catacombs they construct with their music.

But while the pacing rarely surges, the energies and moods do change. Tremolo’d riffing, tumultuous bass upheavals, and cauterizing screams generate sensations of fear and frenzy. In their melodies, and particularly through the shrill leads that infiltrate the songs, the band create changing moods of dread, despair, and soul-shaking anguish. And make no mistake, the band pick their moments to get your head moving too, particularly during “Endless Tides”, whose back-beat rhythms, pulsating riffs, and riveting leads make it the most exhilarating (and infectious) of the album’s tracks.

As mentioned, all of the songs flow into each other, making the album sound like the unfolding of a plague-stricken pageant, as well as an excursion through branching underground realms of the dying and the dead. The band bring the journey to an end with the well-named “Augury Of The Doomed”, and while it is almost apocalyptic in its atmosphere, it takes a surprising detour, which becomes disturbing in a different (and diabolical) way, and fashions a hallucination at the finale.

Iron Bonehead will release the album on CD and LP vinyl. Again, the new release date is February 19th. For more info about the release, keep an eye on these locations:

One Response to “AN NCS ALBUM PREMIERE (AND A REVIEW): ABYTHIC — “DOMINION OF THE WICKED””