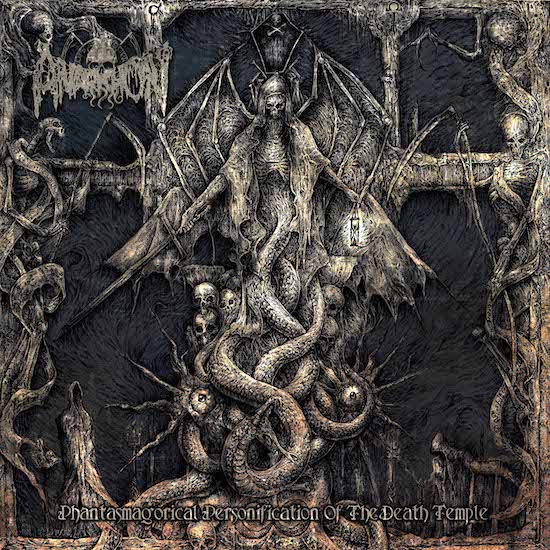 That path led them to their latest album, Phantasmagorical Personification Of The Death Temple, which was released on CD last September by Soul Erazer Records. It seized the attention of Debemur Morti Productions, and their collaboration with Anarkhon has begun with the label’s decision to release Phantasmagorical Personification… on vinyl this coming March 26th. To help spread the word, we are today presenting a stream of that album’s second track in the running order, “Far Beyond Blood and Death“, along with an interview of Anarkhon vocalist/guitarist Aron Romero. 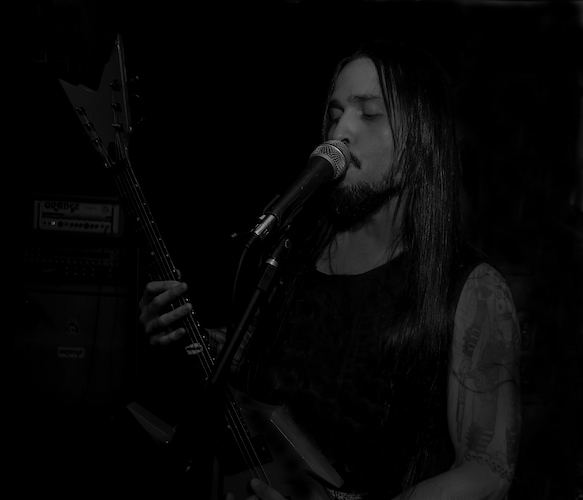 Yes, what we have today isn’t a true “premiere”, given the album’s release last fall, but it will undoubtedly come as a new discovery for many of you — and what an exhilarating yet monstrous discovery it will be. Aron Romero, joined by his bandmates Kleber Hastur (guitars), Jean Raimi (bass), and W. Backer (drums) have concocted music that is both obliterating and mind-altering.

At first, the song we’re presenting today has the resonance of something recorded in a deep and dank catacombs — the eeriness of the ringing arpeggio that opens the song puts a chill on the skin and a tingle down the spine immediately. It sounds supernatural… and what comes next is a supernatural experience of a different kind. The rhythm section discharge a high-speed cannonade that’s near-overpowering, so brutal and thunderous is the assault, but the chasm-deep riffing undulates in blood-freezing fashion, the leads flicker and squirm like deranged wraiths, and the vocals are grotesquely cavernous.

The eeriness of the music persists even as the cadences change. The drumming is maniacally battering, and also resembles an accelerated avalanche, while the bass magnifies the extreme heaviness of the upheaval, yet those weird, ringing and quivering leads maintain an aura of unearthly terror. When the pace slows into a titanic march and the guitars slither and contort like a macabre mutation being born, the music creates an atmosphere of horrifying grandeur.

As Debemur Morti writes of the album as a whole, the song has an obscure, cryptic, and arcane atmosphere, while simultaneously conjuring visions of putrescence and bludgeoning the listener in stunningly violent fashion. Once you hear it (and the rest of the album), you’ll wonder why it didn’t receive more attention last year. But there’s no doubt it will get a lot more attention now, thanks to the backing of DMP and its preparation of vinyl editions.

Speaking of that, the reissue of this latest album on vinyl is an important achievement for Anarkhon, as Aron Romero explains: “All of us in the band are completely addicted to LPs and are vinyl collectors, so this release has a very special flavour for us because it will be Anarkhon’s first vinyl release. An LP is more than just a way of listening to music, it is a cult, it is an experience that needs to be exercised by all true lovers of Extreme Metal.” 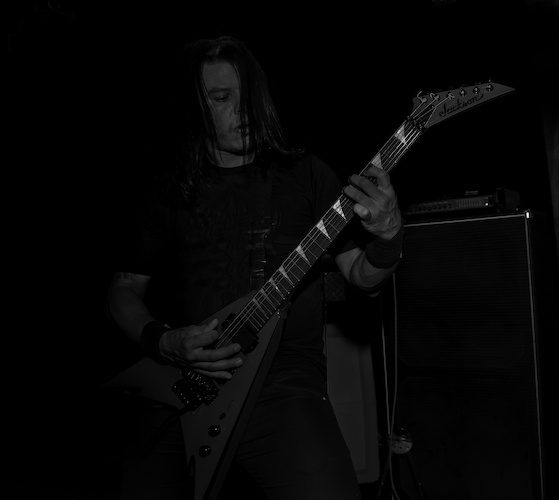 Below you’ll find the interview of Aron that we promised, conducted by Debemur Morti, and it provides insights into the band’s creative process and the lyrical themes for both the song we have presented today and the album as a whole.

As mentioned, DMP will release Phantasmagorical Personification Of The Death Temple on vinyl on March 26th. Pre-orders are possible now on via the links below: 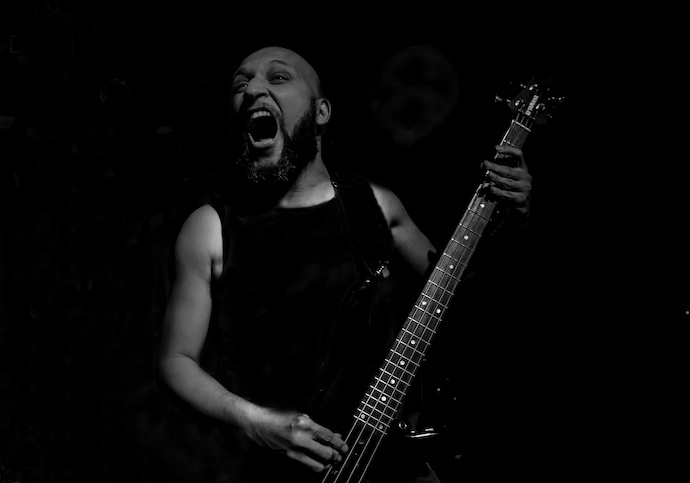 Dear Aron, thank you very much for answering my questions concerning the presentation of your song ‘Far Beyond Blood & Death’. Please elaborate for us a bit about the compositional process for this specific song. When was it written and what was the basis for this song? Did everything start with a riff (or with a melody)? And how did you then develop this track afterwards?

Aron: This track was literally the second song written for the album. In early 2020, I created the main riff first – so, slowly I was building the rest of it around this riff. Our working process is the same for all songs. First, we created all the riffs with no drums, then from that we started working on the drum parts in the rehearsals, and once the process is 100 % complete, then – last step – I write the lyrics.

Which leads me to a more general question: Do you meet in the rehearsal room to work on the songs in general, or is most of it done by sending musical ideas back and forth in a digital way?

Aron: Usually I write the riffs in my place and send it to the guys, so during rehearsals we start working on the drum parts and other details of the song.

Aron: As I mentioned before, this song was the second one written for the album. In fact, the sequence of songs on the record is literally the same sequence in which they were created, so we just followed the natural numerical order of the songs. 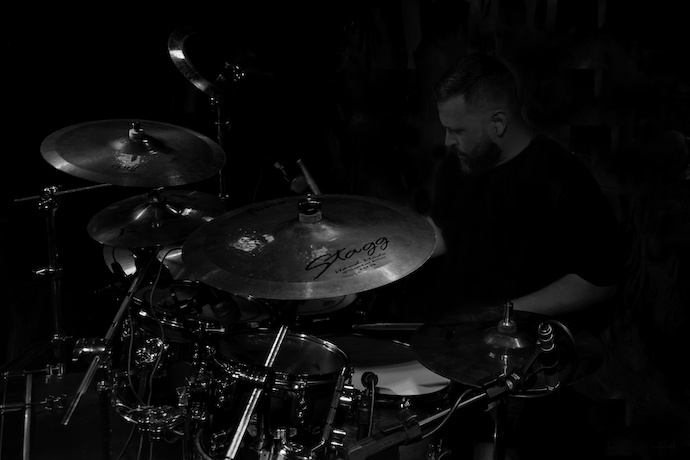 Last question, concerning the lyrical dimension of ‘Far Beyond Blood & Death’: Were the lyrics for this track also inspired by the writings of H.P. Lovecraft? Can you tell us – what lies or awaits us far beyond blood and death?

Aron: Yeah, these lyrics were also inspired by H.P. Lovecraft, as the whole album is. We were trying to create something unthinkable, something completely beyond intellect and human perception in the minds of the listener. Our condition in this existence needs something tangible and with a defined form to calm our ego in thinking that we are superior beings and that we know everything, and the key here is exactly to create the gaps that cannot be filled in a real and explainable way. So, what lies or awaits us far beyond blood and death is what cannot be understood; it is the nauseating idea of the personification of the tangle of cosmic madness.