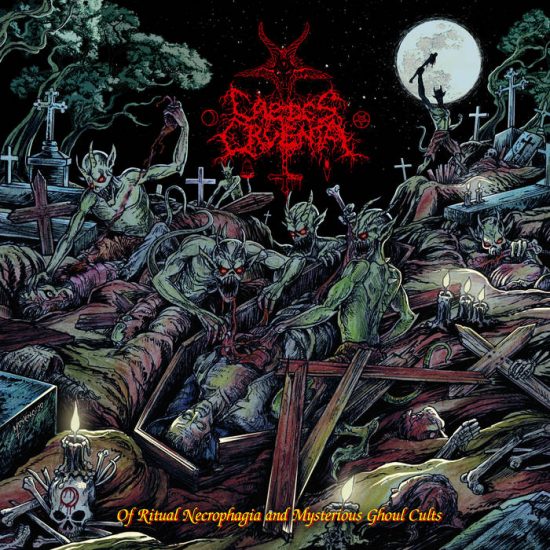 For their third album, and their first one in six years, the Greek black metal band Caedes Cruenta have gone BIG, one might even say Olympian. In the most objective (and mundane) of terms, it is roughly 62 minutes long. But the scale of the album is vast in other, more consequential, ways.

Unmistakably, Caedes Cruenta uphold the finest traditions of classic Greek black metal — the foundational works of Rotting Christ, Varathron, and Necromantia — by melding ferocious aggression and heavyweight punch with ringing heavy metal leads and judiciously deployed synths, as well as a vocal tandem of throat-slitting shrieks and horror-spawning growls. But they do this in ways that create a wide range of atmospheres and emotional sensations — as you shall discover through our premiere stream of the entire album in advance of its February 12 release by Helter Skelter Productions. 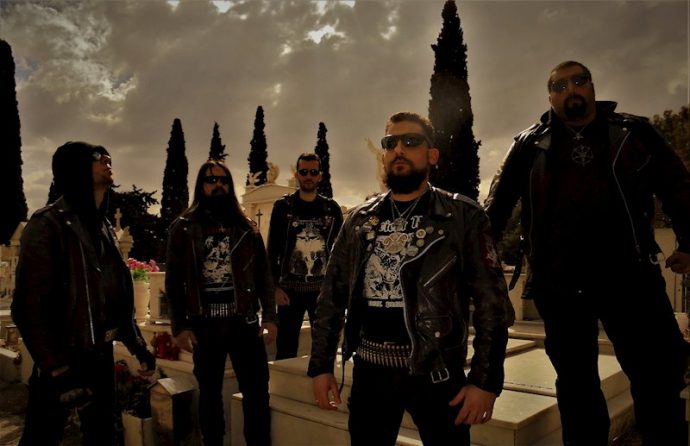 Depending on the song, and where you are within a song, the music can sound imperial, berserk, sinister, or diabolically supernatural (and indeed, this is the devil’s music from beginning to end). The music has the capacity to send your head back, heart pounding, with how wild and glorious it becomes, and is equally capable of creating perilous visions of ominous grandeur. It races with abandon and methodically marches with banners waving and drums booming, betraying no sense of weakness or mercy.

The synth accents also introduce auras of otherworldly mystery, mysticism, and celestial splendor. Similar sensations come through in the occasional spoken words, which sound both solemn and fervent.

The band are highly adept at kicking a listener’s pulse into overdrive with riffs that are fiery and flickering, feverish and skittering, and with blaring melodic chords, screaming, flamethrowing, whammy-barred solos, and relentlessly hammering percussion. But in keeping with the Hellenic black metal traditions that the band proudly uphold, the songs are packed with classic heavy metal stylings that are the root source of all those invisible oranges that have been held up toward the heavens over so many decades.

The album mainly goes full-throttle, but the band do wisely introduce moments that break up the adrenaline rush, including the samples that begin and end “From the Darkest Paths of Golgotha”; the gripping instrumental prelude to “The Mystical Ritual of the Dark Priests”, which deploys organs and horns; the ritual chanting that bookends “Recitation of Abyssic Necropsalms” (as well as the off-speed segment of that same song which makes room for one of the album’s best solos); and the entrancing acoustic intro to the stately magnificence and rapturous glory of “The Wizard of Yaddith”.

All in all, the album is truly a glorious experience (and an evil one), and the songs are so multi-faceted and produced with such power that the album’s great length just seems sumptuous rather than excessive.

The album’s substantial length is due in part to the band’s decision to include re-recorded versions of tracks from their back catalogue as well as new songs — and they recorded all of them live (at Eleventh Tower Studios in Athens). The band also called upon the great Chris Moyen for the album’s cover art.

With distribution and marketing via Regain Records, Helter Skelter will release this ravishing new album on CD, vinyl LP, and cassette tape formats. All are available for pre-order now: