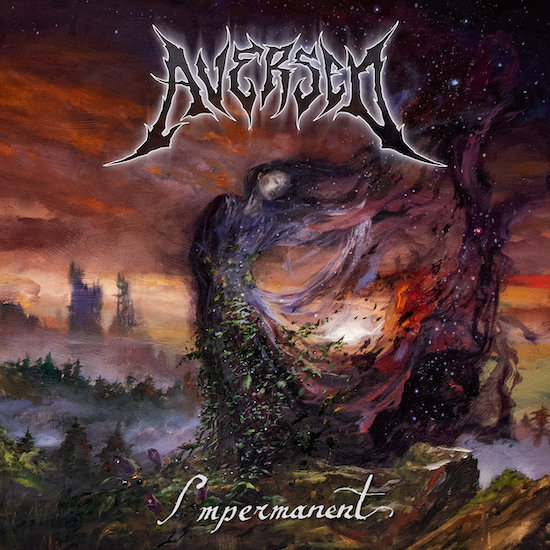 2016 was the year in which Boston-based Aversed released their last record, an EP named Renewal, which followed the band’s 2011 self-titled EP. In the years since then the band’s members focused primarily on their other projects and live performance opportunities, including Seven Spires, a member playing live for Begat The Nephilim and another for Allegaeon/Continuum, and spending time as members of Solium Fatalis and Unflesh previously. But now Aversed are about to return in a big way.

On March 19th they will release their debut album, Impermanent. While the band haven’t jettisoned their progressively inclined take on melodic death metal, they’ve expanded their palette to include elements of blackened and orchestral metal in ways that make their sound even more difficult to succinctly summarize. Still at the forefront are the remarkably varied vocal talents of Haydee Irizarry, again backed by the both hard-hitting and sophisticated instrumental approach of guitarists Sungwoo Jeong and Alden Marchand, bassist Peter Albert de Reyna, and drummer Jeff Saltzman.

Two songs from the album have already surfaced, and today we’re bringing you a third one — “Abandoned“. 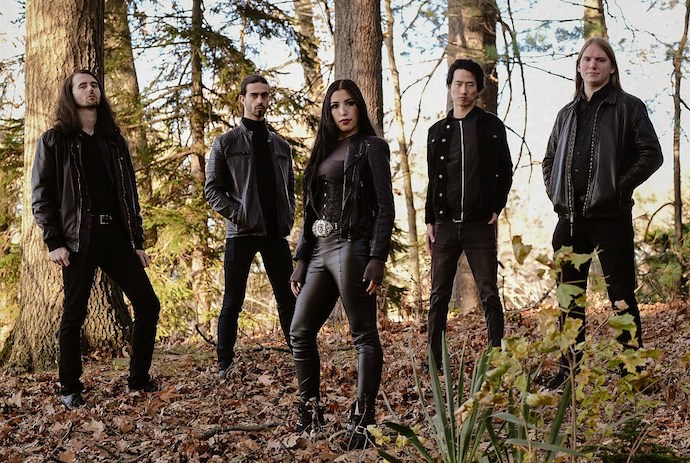 The dynamism of Haydee Irizarry‘s voice — which ranges from sultry to soaring (and snarling) — makes a big impact in this song, and is a well-earned exception to the “rule” in our site’s title. But everything going on around her vocal melodies (and aggressive growls) is equally riveting. “Abandoned” begins with a scintillating, dancing, jazz-influenced guitar duet, and then a fever rises. The guitars swirl above vibrant bass tones and neck-snapping beats. The effect is mesmerizing but also right on the edge of insanity.

When Haydee Irizarry begins to sing, the riffing jabs and squeals, and when she switches to a wolfish howl the song goes into a head-long gallop accented by rapidly darting fretwork. As the song continues to fly ahead, the vocals continues to trade off, as do the riffs and rhythms, which create sensations of viciousness, ebullience, and moodiness (thanks to a beautifully fluid guitar solo). There’s also a point when Irizarry pitches her voice in a sky-bound falsetto and then seamlessly changes it to a nasty growl — right before the song becomes even more savage. A couple more guitar solos also lie ahead (along with some spine-jarring grooves), and they’re spellbinding as well as white-hot.

All in all, “Abandoned” is a highly dynamic thrill-ride, but with an air of melancholy that comes through in the vocal melodies. Jeff Saltzman tells us this about the track:

“Abandoned began with just a name. Sungwoo arrived at rehearsal one day saying, ‘I want to write a song that sounds exactly like the word “Abandoned”. As we constructed the song, the title began to take on the context of the heartbreak that both of us were experiencing at the time, even before any lyrics had been written.

“The word ‘abandoned’ took on several meanings throughout the lyrical process. The person I loved the most in the world was about to move across the planet and our relationship became haunted by an end date when her flight was scheduled. She wanted to pursue her career and I intended to continue playing drums here in Boston, and so neither was willing to compromise and keep the relationship going. The song bears the scars of a relationship doomed, and the pull of a career even if it means sacrificing the person closest to you. We were abandoning each other, but simultaneously a society that emphasizes career goals over love has abandoned us.

“When Haydee then wrote her melody over the chorus, the song was solidified as our own melancholic metal breakup song. I hope it resonates with you as well!” 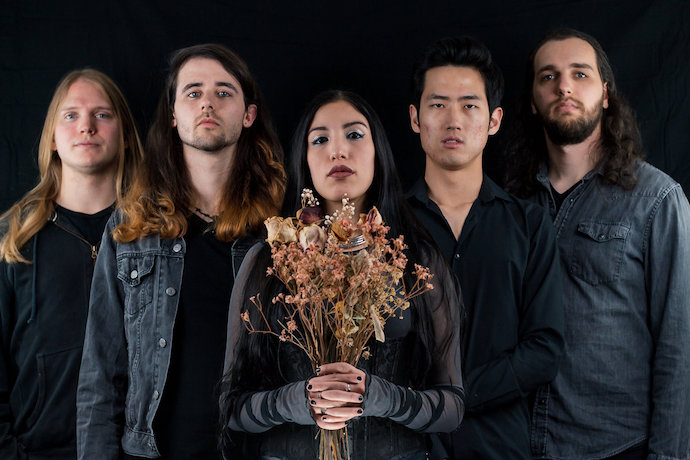 Impermanent was mixed and mastered by Christian Donaldson (Cryptopsy, The Agonist, Shadow Of Intent), and features the fantastic cover art of Adam Burke. Aversed believe the album will appeal to fans of bands that have influenced the release, which include Arch Enemy, Soilwork, Nightwish, Allegaeon, Ne Obliviscaris, The Gathering, and In Flames, among others. About the album as a whole, Aversed have stated:

“The album presents our own struggles with anxiety and depression reflected on the backdrop of environmental collapse on Earth. However, like the changing mind, we present this inevitable human destruction as a chance for a beautiful rebirth, a chance for new life to flourish. We attempted to portray this imagery by combining the violence of death and black metal with the lighthearted beauty of rock and roll, blues, and classical.”

In addition to the links below, we’re also including streams of the two album tracks that have been previously released.