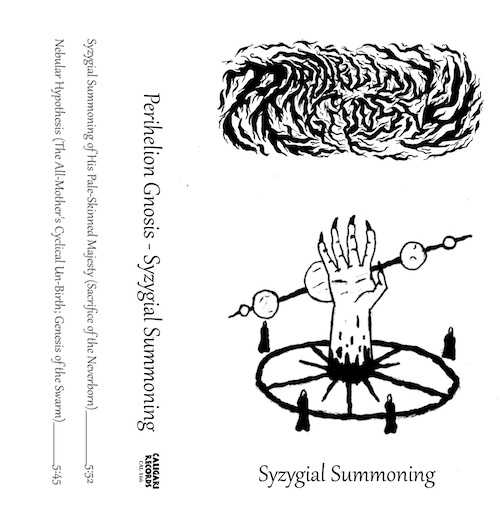 With just two songs, the debut demo of Perihelion Gnosis makes a powerful statement of malicious intent, leading the listener into a lightless catacombs of dread, horror, and mindless violence. Through an alchemical amalgam of ghastly, ravaging death metal and soul-sucking doom, Syzygial Summoning delivers both stunning brutality and blood-freezing supernatural terror.

Caligari Records, which has a proven track record of taste in underground extremity, will be releasing this new demo on February 18th, but today we have the opportunity to present a stream of it in full. Wear body armor and tie your sanity to a firm foundation, because both body and mind will be in jeopardy. 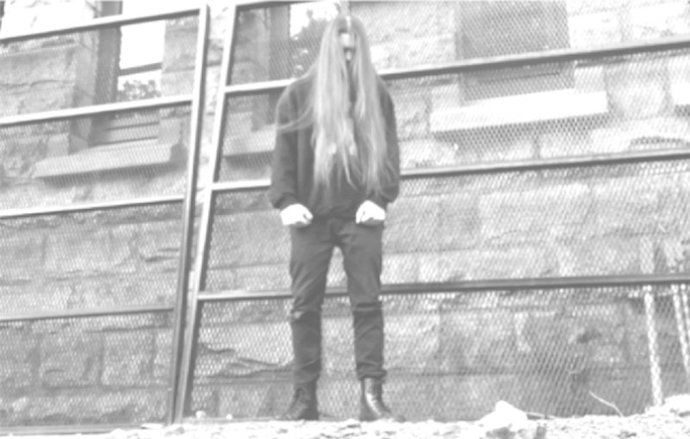 By way of background, Perihelion Gnosis is the work of Canadian musician Caleb Simard, aided by a close friend who is responsible for crafting the lyrics, concepts, themes, and even artwork and logo. We’re told that the lyrics “are inspired by cosmic horror, the fear of the unknown and unknowable, the infinite vastness of space and how very insignificant the human existence is seen at a larger scale”. All lyrics “are set in the same universe that’s constantly being built upon in new songs, with returning characters and storylines”. A concept EP is planned that will feature concepts and characters introduced on Syzygial Summoning and upcoming releases.

As for the music, we’ve provided a preview of the songs, but more remains to be said.

The first track, “Syzygial Summoning of His Pale-Skinned Majesty (Sacrifice of the Neverborn)“, begins with ominous, severely corrosive guitars, skull-fracturing drums, and cavernous roars. These sensations lead the song forward in a grim, stalking march that radiates hostility and pavement-cracking power. The lead guitar slowly wails in tones of misery — and then, with a brutally hammering transition, the song begins to scamper in a d-beat cadence as the riffing whirs and whines in madness. When the drumming tumbles and smashes and the bass deeply groans, the riffing becomes a savage, unreasoning swarm. Further bursts of turbulent upheaval ensue, intertwined with further episodes of catastrophic pounding and poisonous fretwork, as well as mad gallops and demented riffage, everything culminating in a paroxysm of unhinged violence.

“Nebular Hypothesis (The All-Mother’s Cyclical Un-Birth; Genesis of the Swarm)” also begins in ghoulish fashion, through a mix of sledgehammer drumwork, gut-slugging bass, and horror-steeped chords, infiltrated by a slithering guitar lead that’s both reptilian and hopeless in its sound. But once again the band shift gears after a dose of spine-shaking percussion, both spinning in chaos and stomping with dictatorial vehemence. The slowly slashing chords and moaning fretwork excretions, coupled with those cavernous growls and pulverizing drum strikes, are mercilessly oppressive, but no more so than the morbid, crawling melody. The band again kick themselves into a gallop and then pull back on their bridle, dragging listeners behind them into a pit of dread and despair, accompanied by the piercing tones of a solo that bespeaks pain and desolation.

As usual, Caligari Records will release the demo on limited edition cassette, as well as digitally. If a further preview were needed, the PR materials tell us that if you “imagine a malformed spawn of Disembowelment and Cianide, informed by demo-era Demilich, you’re getting nearer to Perihelion Gnosis…but not quite exactly there”.