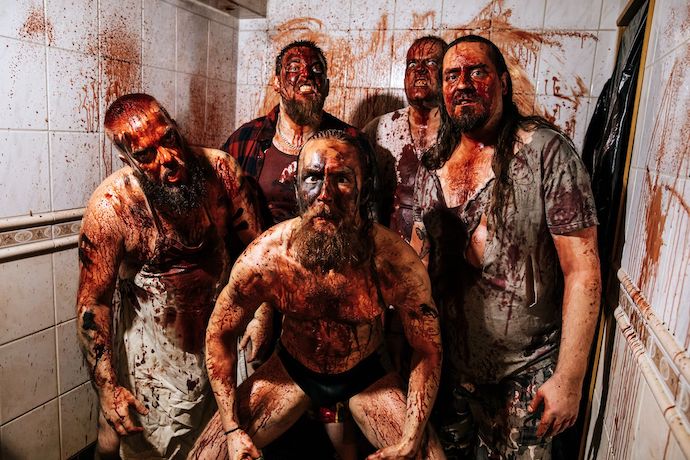 Let’s cut to the chase: While the Finnish band Cannibal Accident look like a group of blood-soaked killers who’ve lost their minds, their new album Nekrokluster is one of the best old-school death-grind releases you’re likely to encounter this year. There are many reasons for that, but one of them which might not be expected from outward appearances is that these maniacs turn out to be really good songwriters, and top-shelf in their execution (pun intended).

To be clear, the album is blood-soaked and lethal, and well-calculated to leave its listeners gutted and bone-fractured. But there’s more going on here than obliteration of body and mind — as you’ll discover through our premiere of a full stream in advance of its February 26 release by Time To Kill Records. 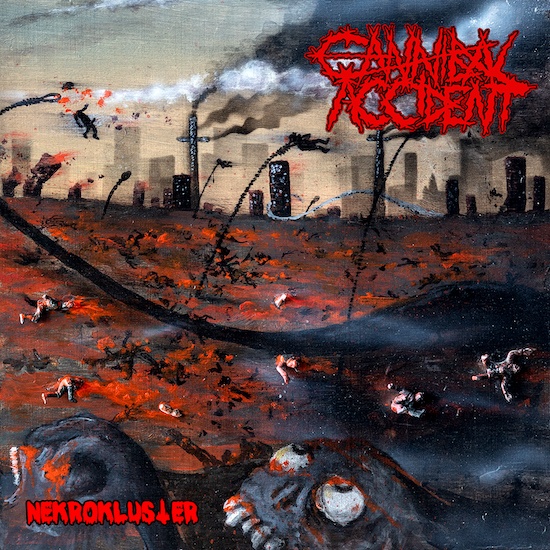 The obliterating impact of the songs is in part a function of the traumatic power of the sound. The production is vibrant, clear, and evenly-mixed, but the clarity does nothing to detract from the music’s mangling, mauling, and earth-quaking impact. The super-heavy, bone-grinding bass is a big factor in the music’s pavement-cracking low-end power, and the force and diversity of the drumming is another — it jackhammers, gallops, stomps, tumbles, booms, and spits bullets like a machine gun (with a bass drop or two also lying in wait). The mission seems to be to leave no bones un-broken.

But of course there’s more. The vocals are completely rabid — a constantly veering panoply of gruesome guttural roars, hair-raising screams, wild yells, strangled screeches, and noxious gagging sounds (though with a few instances of sampled spoken words). And the riffing is also wide-ranging across the span of the album, delivering sensations that are hard-charging and maniacal — slashing, darting, jittering, quivering, and boiling, but with stripped-down punk chords and a bit of chugging in the mix as well.

There are plenty of times when the music sounds like a junkyard metal compacter on overdrive, but there are also plenty of skull-fracturing grooves as well as braying, blaring, and squirming melodic accents, episodes of harrowing horror, and even a brief acoustic guitar melody, plus a few shrieking solos.

The songs are mainly fast-paced and adrenaline-triggering, with occasional segues into brutish lurching cadences and doses of methodical pounding, but in all the ways summarized above, the band switch things up within each track, and all of them prove to be catchy — as mentioned at the outset, these ghoulish dudes really know how to write songs in a way that makes them quickly addictive, in addition to wrecking necks, crushing craniums, and indulging in sheer lunatic mayhem. 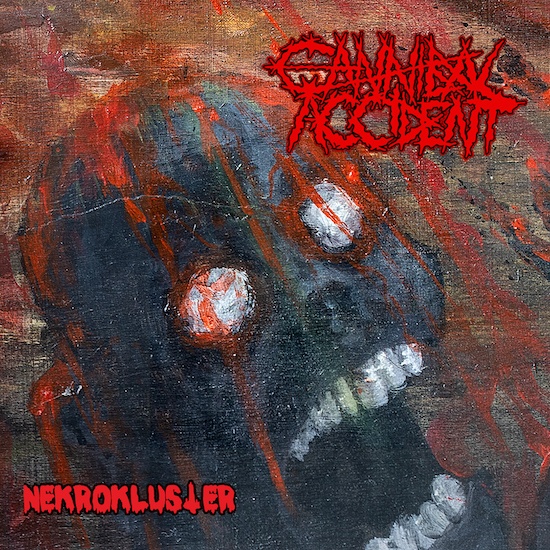 The album consists of 17 tracks that fly by in about 28 minutes, most of them hovering around the two-minute mark, and three of the last four closer to one minute. So, while we wouldn’t object if you just sampled a few of the tracks (they’re all killer, so you could do that at random and begin to get a good sense of what’s in store), you’re better off just carving out the half hour and let it run through you from beginning to end.

We’ll close with a comment from the band, who proudly proclaim that they still put a big emphasis on mosh parts even though they’re leaning more into their death metal side on this new release:

“Hey you grindfuckers! Welcome to the world of Nekrokluster. It might seem quite disgusting and horrible at first, but we assure you that it will be a rewarding experience to let your ears get mangled by these grinding death tunes. It’s only 30 minutes off your life, which could be spent in a lot more ineffective way. After that: eat yourself or someone you love!”

Nekrokluster will be released by Time To Kill Records on February 26 on CD, LP and digital formats — with variant covers painted by Perttu Koho for the CD and vinyl editions, both of which are visible above. Credit goes to Teemu Heinola at Ansa Studios for recording and mixing the record, and to Jori Haukio for mastering it. Pre-orders are available now.