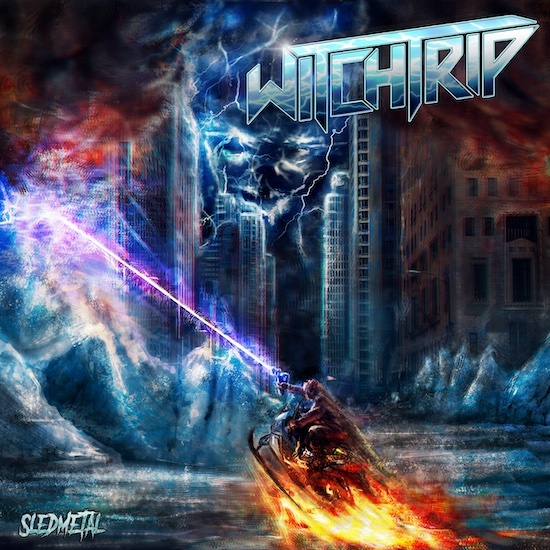 It’s time for a return visit by a hard-to-define metal band from Winnipeg, Manitoba, Canada, whom we’ve been writing about since 2018 when they released their first EP, Cosmic Cauldron. They followed that release with a second EP, A Burnt Offering, in 2020. Metal-Archives now classifies them as “Split-up”, but the accuracy of that is questionable, given that they’ve completed a third EP named Sledmetal which is set for release on March 9th.

This new EP is a five-track offering, and we accepted an invitation to premiere one of them. Problem was, the band left it up to us to pick the track. That turned out to be a maddeningly difficult choice because all the tracks are so damned good. So the band took pity on us and said, what about two tracks? We jumped at that chance (though it was still a tough call), and so now we’re presenting streams of two songs from Sledmetal — “Psycho Kid” and “Reptile Lords“.

Metal-Archives sums up the music on the band’s first two EPs as “Sludge/Groove Metal/Hardcore”, but those genre references don’t go far enough in the case of this new EP. Let’s start with “Psycho Kid” as an example.

There’s a sense of tension and gloom in the ringing riff that opens the song, and a heavy groove in the bass pulse and drum snap that join in. But with a wild howl, the riffing becomes jittery and jabbing and then viciously boils and soars as the drums hammer and the vocals vent an evil, scorching, werewolf fury. Those vocals are spine-tingling, and wouldn’t be out of place in a black metal band, and the music also morphs into a much more ominous, thrumming sensation, with some neck-bending chugs in the mix as well as a relentlessly neck-ruining snare attack. The bursts of maniacal screaming, blasting drums, and tremolo’d savagery are especially electrifying as they reappear.

Whatever genre labels you want to stick on this song, it delivers visceral, hard-hitting physicality while also generating feelings of bleakness, menace, and fury.

The other song we’ve got for you today, “Reptile Lords“, is a more hard-rocking affair, which becomes evident right from the start in the vibrant drum rhythm and pulsating riff that launches the track. But the rabid savagery of the vocals and the grim, poisonous tones of the melody ensure that the track is still an evil one. To be sure, the slugging grooves in the song are potent, but there’s a feeling of derangement in the bursting guitar frenzies. You can’t help but move to “Reptile Lords”, but you also can’t help but feel the fangs sinking into your throat.

These are the two songs we picked, in part because they’re so addictive, but as mentioned above, it was still a hard choice. The other three tracks are also well worth hearing, because they each have their own character, and aren’t in any way clones of any others. Moreover, they’re arranged together in a way that creates a dynamic and captivating flow. Keep your eyes and ears open for the chance to hear all of them on the release date.