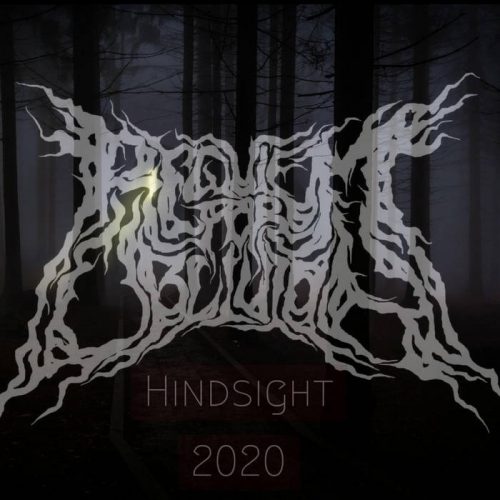 Almost four years have passed since we last heard from Requiem For Oblivion, who make their home in Erie PA. Their last album back then, Burning Nation, was a head-spinning fusion of technical and progressive death metal that was multi-faceted, unpredictable, and electrifying. And now the band is returning… and some things have changed.

Requiem For Oblivion have marked their return with a new EP named Hindsight 2020 that will be released on March 5th, and which you’ll be able to hear for yourselves through our premiere of a full stream. Trying to sum it up as a challenge, but here’s a stab at it:

The music is mechanistic and merciless in its destructiveness but also freakish and twisted in its bizarre and surprising contortions — a display of cold machine power dialed up to titanic levels but operating within a state of untreatable psychosis. The grooves are so massive and punishing that they’ll tempt you to ruin your neck, but everything else about the music (and, to be honest, even the grooves themselves) will keep you (and your sanity) off-balance, to the point that by the end you may be asking, “What the fuck just happened?” You’ll wonder where you’ve been and how the hell you’ll find your way get back to where you started.

Founder Steve Jacobson and drummer Mike Scutella currently make up the creative core of the band. Jacobson explains: “”This EP was written mostly in 2019/2020 and involved our old guitarist who is no longer with the band. Since 2017’s Burning Nation, we had not released anything, so wanted to push something out. We also have a new drummer for this release, so, in a way, it’s a gateway to a new era/sound for the band.”

And yes, it is clearly a new sound, though the band’s penchant for surprising the hell out of listeners remains. Lyrically, the band touch on different topics: “causes of petty strife between people worldwide, condemning the misdeeds of government and society, self-loathing, scoffing at conspiracy theories, and even Egyptian esotericism”. As for the music of the individual tracks, we can’t resist the temptation to comment about each one:

The opener “Lies And Fire” is loaded with punishing depth-charge grooves, feverishly squirming leads, gargantuan roars, maniacal howls, and distorted screams. The pile-driving momentum and clattering snare attacks are physically compulsive, and the brutish atonality of those assaults is mercilessly cruel. However, the wailing and worming, darting and blurting leads and other weird electronic accents give the music an alien madhouse atmosphere.

Within “Collapse The Structure” the rhythms are even more manic and morphing but no less bone-smashing, while the freakish, blaring quality of the leads is even more bizarre, yet the song down-shifts into dismal interludes paired with trippy wailing vocals, while also spectacularly flaring into fieriness and spinning into bursts of nerve-wracking lunacy. The level of punishment inflicted is still way up in the red zone, but the panoply of lunatic string contortions and outlandish vocals create an atmosphere of derangement, and those slower segments sound like frightening, drug-induced hallucinations; the weird guitar solo at the end is a real chiller too.

The well-named “Shatterpoint” sounds like an industrial factory that has become sentient, and then lost its mind. It’s powerfully destructive in its jackhammering and stomping grooves but layered with a mauling and mutilating abrasiveness. A couple of times the song suddenly slows, becoming more saturated in gloom, and those pounding sensations also speed up like some gigantic sewing machine stitching its mad designs into your skull — and there are spurts of darting fretwork that seem ebullient in their madness. But again, those dismal singing vocals reappear to introduce a bit of psychoactive misery into your life, and as a further surprise, the song suddenly switches into a slow mournful guitar instrumental at the end.

Jacobson describes “Conspiracy Bro” as “our one (and probably only) goofy song for now… just a survey on the crazy conspiracy theories and whacky thinking of some people. If you wear a tinfoil hat or think theres a secret camera in your key FOB, this song is for you!”

Musically, it’s a mid-paced hammer job that periodically goes crazy with screaming guitars and further doses of grotesquely distorted vocals, but the song also channels moods of crushing oppressiveness and grows even more titanic in its slamming, pavement-splitting power as it twists along its gnarly path. Plus, the band also bring in what sounds like falsetto gibbering vocals along with queasy, mewling leads.

And to close the EP, “Esoterica” opens with a strange dancing guitar and guttural muttering, and then further unfolds with a neck-cracking rhythm but soon magnifies in the force of its bludgeoning. But of course it’s a demented piece of music too, whose unpredictable and exotic intrusions will keep you destabilized, as do the vocal changes. There’s a brief pause and then things get wild, with a popping snare rhythm paired with enormously heavier spine-shakers. When this one slows, it becomes haunting and harrowing, full of dread and psychosis, populated by what seem like drug-induced visions and chilling apparitions, and segmented with destructive frenzies.

So now that I’ve gotten all that off my chest, I’ll leave you to the music, which really is a hell of a trip. If you like what you hear you can pre-order now, as soon as you figure out where you rind went.