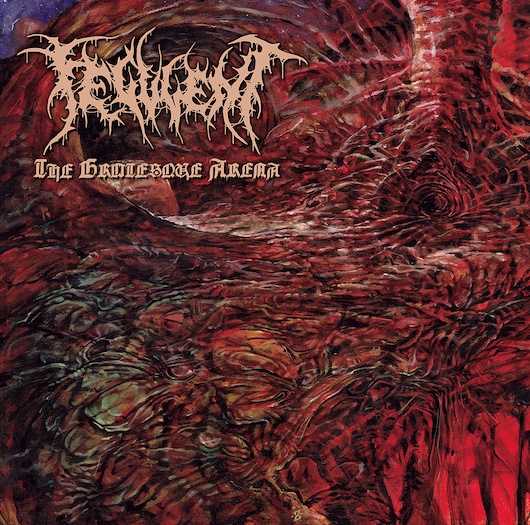 The Brisbane-based band Feculent chose for their name an adjective that means “foul with impurities” and “saturated in waste”. That was obviously a carefully considered decision, because their brand of death metal is foul and disgusting, unhealthy and repugnant, devoid of hope and lethal in its objectives. But Feculent’s administration of audio murder is multi-faceted — they are as capable of delivering the most pulverizing of punishments as they are at radiating sensations of flesh-eating contagion.

And they are very, very good at doing all that, and more. Perhaps this shouldn’t come as a surprise, because although Feculent is a new name, the line-up includes members of Snorlax, Shackles, and Resin Tomb, who’ve already made horrifying names for themselves.

Feculent’s debut release is a six-track monstrosity named The Grotesque Arena, and it’s coming out very soon (March 19th) via Brilliant Emperor Records — but you need not wait a moment longer to experience it, because we present a full stream today. 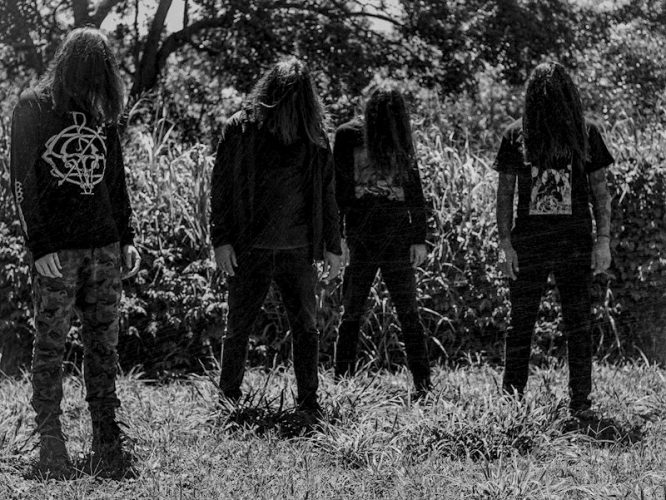 For The Grotesque Arena, Feculent have deployed almost exclusively tremolo’d riffing to generate the changing moods of the music — though to be clear, those moods are always pernicious and preternatural — and have combined that with an array of truly grotesque vocals and a penchant for turn-on-a-dime tempo changes, plus (as forecast above) frequent injections of brute-force trauma. It’s a winning combination.

As mentioned, you’ll be treated to a lot of tempo dynamism within each compact song, which increases the thrill factor and may also keep you off-balance, but across the six tracks you’ll find that some songs are generally faster or slower than others — some more thoroughly maniacal and others more rotten and festering.

For example, the opening assault, “The Grotesque Arena: Upon Splintered Bone” (which is the record’s longest track), shivers the brain with insectile feeding sounds and then erupts in a storm of rapidly pummeling drums and bass along with swarming, seething riffage and savage roars. The rhythm section veer without warning into punishing, pile-driving grooves, and the riffing soars in blazing, deranged tones, while the vocals become noxious screams and grotesque gurgles. Yet the band also slow the pace into a thuggish slamming breakdown accompanied by poisonous, rising and falling fretwork.

They follow that with the more mid-paced “Host Consumed”, which includes riffs that are cruel and cold — the sounds of a drill-bit boring through thick bone — and “Weaponisation Of The Amygdala: Endless Warfare” segues into morbid, groaning stomps. But both those songs also include bursts of blaring fever, cacophonies of lunatic screams and guttural growls, and of course episodes of rampant brutality.

Speaking of brutality, “A Pit Of Unscalable Depths” administers jackhammering grooves as well as whirring fretwork vibrations that channel mutilating pain and helpless despair, and “Beneath Bedlam” creates an alien buzzing harmony that comes in waves, building a feeling of dangerous tension over droning low-frequency reverberations and methodical drum strikes. The tension in the latter song never breaks, though the band do pick moments to put the sledgehammer to the back of your neck.

It’s evident that Feculent have quickly developed a mastery of this kind of ghastly death metal, equally devoted to violence and morbid atmospheres, and they prove that once again in the EP’s closing track, “The Grotesque Arena: A Perverse Spectacle”, where the band again stomp on the accelerator, delivering another mad dash, but again segmenting that with obliterating percussive blows. The music sounds wild and exultant in its madness, but also morphs into a lumbering beast surrounded by a miasma of agonized, moaning guitar sensations that give off aromas of plague and rot — and it’s capped by a final maelstrom of horrifying voices and dissonant screaming strings.

We remind you again that The Grotesque Arena will be released on March 19th by Brilliant Emperor Records — and it’s available for pre-order now: