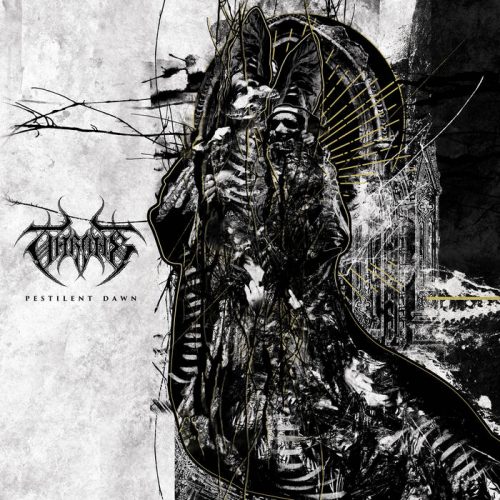 (This is Nathan Ferreira‘s review of the new album by Michigan-based Throne, which is set for release by Redefining Darkness Records on April 9th.)

In my constant search for the most devastating, pulverizing sounds I can find, what sometimes gets lost in the journey, at least in the more abstract and fuzzed-out realms of death metal, is emotion. Amidst the hyperspeed tempos, atonal and warped guitarwork, and reverb-slathered vocals meant to sound as inhuman as possible… well, I don’t really feel it. Sometimes you just want music that hits you right in the gut, that lets you channel that sense of pure rage where nothing makes sense except for turning whatever is in front of you into a pile of rubble.

It would appear that around the turn of the century a lot of death metal musicians had the same feeling I did, and attempted to alleviate the issue by mixing the calculated chaos of death metal with the raw, unhinged emotion of another heavy genre, the ever-present companion influencing metal’s development – hardcore. In many ways, though, it was a wonky transition, with many metalcore and even deathcore bands turning to the wretched scream/sing formula, and the scorn from collective metaldom was prominent enough to inspire the name for this very site. But what if there was another way? 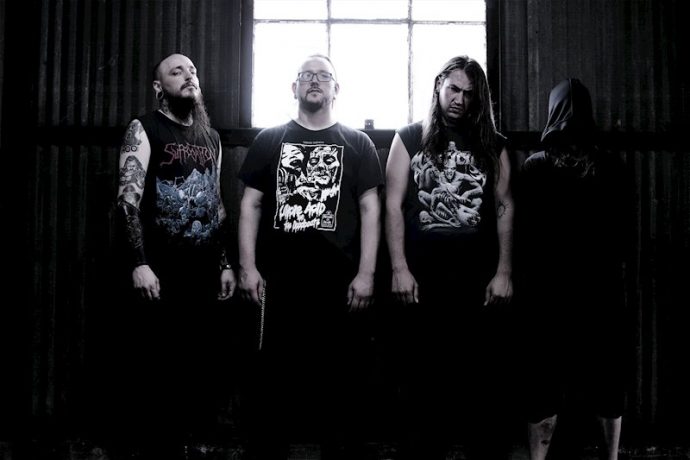 Throne, an upstart band out of Michigan, exemplifies exactly the type of sound I have been searching for all this time, and have only discovered in occasional bursts. It’s deathcore… without the ‘core’. That feels like an inadequate description, because there’s still a stripped-down, raw anger to this that hearkens to punk-oriented roots and a blunt lack of nuance in the breakdowns.

Nonetheless, when you pick apart the influences in the riffing and song structuring, there’s nothing else you can say it sounds like other than the furious maelstroms of bands like Hate Eternal, Azarath, Marduk and Angelcorpse. The key difference is that the delivery is less “mystical incantations” and more “hammers to your skull”.

When I was first starting to listen to this album, something about it sounded oddly familiar, and then some light digging revealed that guitarist/vocalist Nathan Barnes also plays in blackened hardcore outfit Sunlight’s Bane, who released one of the most pummeling and disgusting albums of 2017, which made me want to clothesline toddlers in a similar fashion to Throne, with a slightly different edge. Both bands are caked in nasty filth, but where Sunlight’s Bane was just a hint more diabolical and subtle, Throne sounds pissed. Pestilent Dawn evokes images of a dilapidated city, once thriving and now abandoned, with strange hooded figures lining the alleyways whose heads snap to attention as you pass by – but it also makes me want to lift weights.

These feelings are often evoked simultaneously. “Beyond Malice” starts with a viscous start-stop chug that breaks the tension between sections of claustrophobic, snaking low riffs, and “Amongst the Sinners, They Came Forth” has a riff midway through that combines a decimating chug break with a dissonant chord combination that is sickly, evil, and makes me want to punch things.

Part of the pure, focused fury of Pestilent Dawn comes from that, and then there’s the other two components in the triumvirate: one being the vitriolic vocals of Barnes, his high rasp being an ear-piercing, modern high a la Trevor Strnad slathered in a layer of venomous static. The other is the powerful work of drummer Kollin Perpignani, with a heavy-handed snare and feet that are just ridiculously fast, addictive in the same way as the skinwork of bands like Belphegor and Dark Funeral. There’s a much blunter emphasis on the edges of the drum patterns to fit the stuttered pummeling – the cymbals pop a little bit more, and Perpignani isn’t afraid to throw in a quick splash or snare roll to mimic the punch of the guitars. It would be too obvious if it wasn’t going at lightspeed, but since it is, my goodness is it ever tasty for a speedfreak such as myself.

It’s hard to find bands that stand out in the “wall of sound death metal” realm, and even harder to find bands that can capture the same sort of simplistic, heavy-handed magic that modern brutal death metal and slam started to veer towards in the 2000s. By merging an old-school sense of entropy and seething anger with modern brute force, Throne found the sweet spot and wrote an album that is both atmospheric and punishing, the perfect background music for horror movies, gyms and mosh pits all at the same time.

Pestilent Dawn comes out everywhere on April 9th, 2021, with a CD being released through Redefining Darkness Records. The album was recorded and mixed by Andy Nelson at Bricktop Studios, and mastered by Brad Boatright at the renowned Audiosiege. The layout was done by Brian Sheehan (Wolvhammer, Chrome Waves, Jesus Wept). Musically, Throne is highly recommended for fans of Suffocation, Hate Eternal, Belphegor, Dark Funeral, Devourment and Angelcorpse.