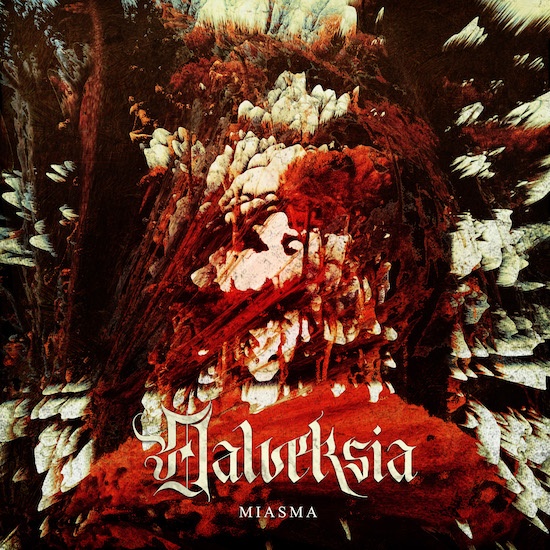 “Formed in 2016 while on the night shift”, the British band Halveksia took their initial inspirations from a mix of doom, gothic rock, and melodeath, but have evolved in a direction of death/doom — albeit with an interweaving of stylistic ingredients not often heard in the genre. Their music is undeniably heavy and head-moving, but also haunting, and capable of channeling harrowing emotions in ways that aren’t easily forgotten.

Halveksia’s debut EP is named Miasma, and it’s now set for release on March 26th by Infernum Records. The EP’s opening track, “The Rift“, emerged first, and today we’re premiering a video for the EP’s title track. That track is divided into two parts on the EP, but those are combined in the video, and the effect of them together is a changing experience that is as captivating as it is disturbing.

A somber but beguiling piano melody introduces “Miasma“, backed by the patter of what sounds like a hand drum, as a man walks along deserted, snow-covered lanes in the video. There is a vibrancy in those introspective sounds, but also a feeling of wistfulness in the entrancing harmony, and maybe even regret. The wintry visuals, which are almost empty of human presence, deepen the spell. Subdued spoken words and soft strummed chords emerge as the piano and drums roll on, and the walking figure, in slow motion, puts one foot in front of the other.

The motion in the video begins to speed up as a sign that things are about to change — and they do. Heavy, jagged riffs join with a sharp snare pop, savage roars, and tormented screams. The music builds a feeling of crushing oppressiveness mixed with tightening tension and raw pain. The music wails in tormented tones, steadily increasing the intensity until the rhythm becomes a clobbering stomp and the melody a yowling, anguished creature.

There’s a break in the intensity, when depressive spoken words emerge again, and then in long groaning tones the music assumes an ominous, dangerous mien as a foundation for guitar leads that quiver, slither, and soar, creating a mood of tragic, despairing grandeur above gut-rumbling bass and neck-cracking drumwork. When the drumming vanishes, the guitar spasms in a final manifestation of agony.

And now we’ll share some words from Halveksia vocalist Jai about the lyrical concept and the general feel of the EP:

“We’re pleased to finally be releasing our 4-track EP Miasma. The EP itself was originally going to be a 6-track album, but we felt after recording all the songs we had yet to refine some of them and overall felt like quality over quantity was important. We looked to bring a hard-hitting edge to the Doom genre as well as experiment with our ideas and create a fluid type of genre between different types of metal.

The original premise for our album was a descent into the human psyche, and how it can devolve and fracture at any moment, returning to its primal roots and escape from the reality we have built for ourselves in society. Putting the lyrical idea aside, we also wanted to play fat riffs and have a good time playing which we think we have accomplished! We hope you enjoy a taste of Halveksia and there is certainly more to come.”

Indeed, the band report that they are already booked to play Doomsday Festival in June with Primordial and Arcturus, and are working on a tour when conditions permit.

Credit for the video we’re presenting goes to Brainthrill Studios, and it suits the music very well. The EP artwork was designed by Samuel Nelson and Harrow: Photography and Design, with a logo by Adam Henry Design. It was recorded live at Brighton Electric, mixed at the band’s home studio by Halveksia guitarist Jack, and mastered by Role at The Tonmeisterei in Oldenburg, Germany.

The EP is available for pre-order, and we’re also including a stream of that opening track “The Rift”.