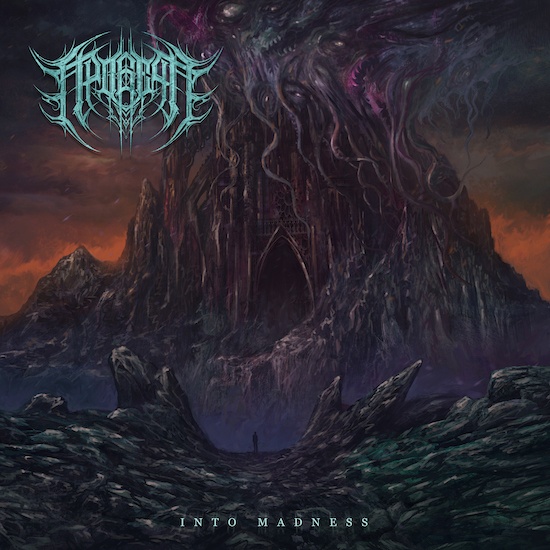 The Toronto-based technical death metal band Apogean will be introducing themselves to metal-loving peoples world-wide through a new EP named Into Madness. It’s based on a conceptual narrative that is intensely disturbing on a planetary scale — in the band’s description, a story “of the fall from the heights of sanity, to the very depths of madness and all that can be experienced on this journey,” with the music carrying the listener on “this path of knowledge, loss, and resurgence”.

Apogean will be releasing the EP as a series of singles, and today we present a lyric video for the first of them, a track called “Chrono“. It is the second track on the EP, and the second chapter” in the story arc. 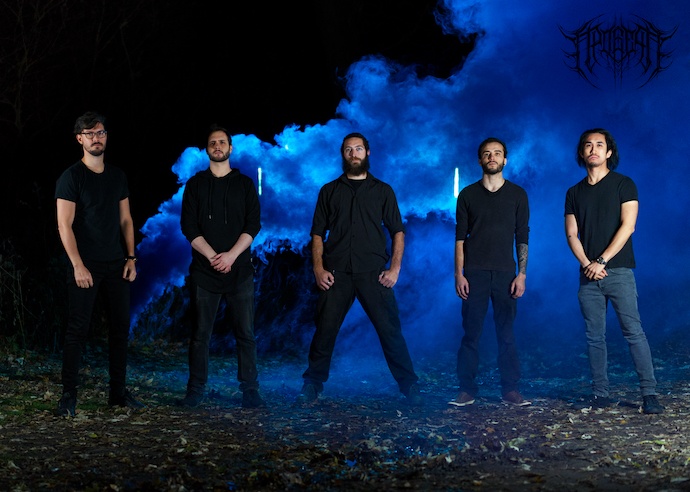 Apogean drew their inspirations from such groups as The Faceless, Entheos, The Contortionist, Fallujah, and The Zenith Passage, and it’s a safe bet that fans of those bands will thoroughly enjoy what “Chrono” and Into Madness as a whole have to offer.

The words you’ll see in the video for “Chrono” (beautifully made by Dylan Gould in a way that makes ravishing use of the EP’s cover art by Erskine Designs) vividly portray, in horrifying terms, the impending extinction of life through violent upheavals in the earth itself, the fouling of the air, the blotting out of the sun, the poisoning of our bodies, and more — with no hope and nothing ahead but death.

In the accompanying music Apogean create a kaleidoscopic experience, delivering darting and swirling fretwork that combines both angular adventurousness and fluid seductiveness, as well as dynamic rhythms that are both gut-punching and head-moving, and vicious, barking vocal savagery. But after the band have set the listener’s head spinning, they inject a surprising piano interlude followed by a jabbing and jolting flurry.

That piano interlude turns out to be a hint of other surprises to come, including a soft and mesmerizing instrumental interlude that creates a mood of mystery and wonder. But when the band turbocharge the energy again, the feeling of the music is one of blaring madness and pain. Yet there’s still more to come, including a sinuous guitar solo and further bursts of fretwork ebullience and bestial belligerence.

And thus Apogean reveal themselves to be not only technically impressive, and impressively vicious, but also songwriters (and storytellers) with a feel for melody and mood.

About this new song the band have told us: “Chrono, the second song on the EP and story-wise, the time frame and setting of the world in which the EP was created; Chrono sets the feel as the ‘soiled crypt’ from where all this ’emanates’. The sharp guitars and chaotic changing riffs help to cement this track as the story unfolds, leading the listener ever onward… Into Madness.”

The new EP will be released with the help of Blood Blast distribution, and it was mixed and mastered by none other than Zack Ohren.

Keep an eye on the locations below to learn how you can download this new single, and for the revelation of further singles to come.