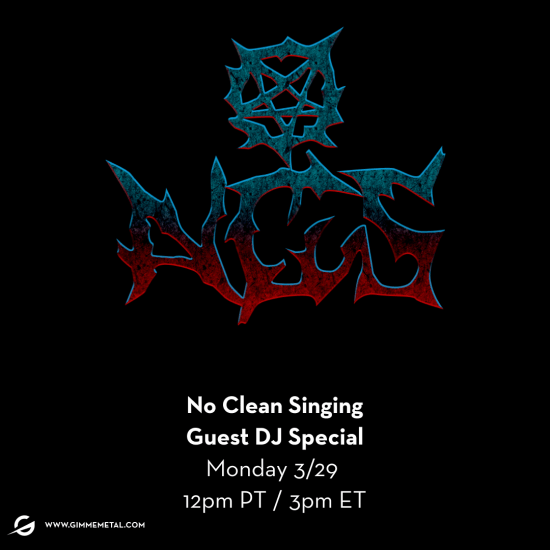 Way back on the 17th of August, 2020, three NCS writers — (Andy Synn, DGR, and Islander) appeared as guest DJs at GIMME METAL, curating a two-hour on-line radio show in which we spun tracks of our own demented choosing, interspersed with our own pre-recorded banter, and also engaged in live on-line chats with listeners. And then we did it again on on October 28th. And now we’re on the verge of doing it a third time — on next Monday, March 29th, at noon Pacific Time, 3 p.m Eastern Time, and 8 or 9pm in Europe.

Yes, it’s true — the people in charge of lining up guest DJs at Gimme Metal asked us to do it again, once again putting us in the midst of a bunch of stellar musicians who normally handle the guest spots. We apparently haven’t provoked listener boycotts through our previous appearances, and maybe even a few people thought our music choices were cool. But whatever the reason, we’re once again happy as hell to be invited back, because once again we’ve had a ton of fun putting our playlist together and recording our incredibly meaningful and entertaining commentary, and we’re also again looking forward to chatting with people during the show. 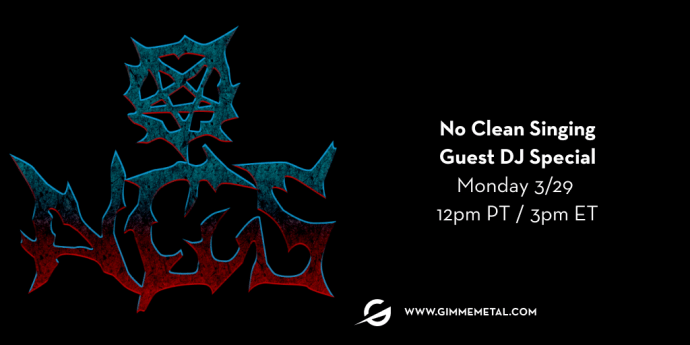 in case you haven’t memorized the date and time yet

For those not in the know, Gimme Radio is an app-based and on-line music streaming service founded by digital music veterans from Apple Music, Google Play, Beats Music, and Napster. The company builds communities of music fans on a genre-by-genre basis, and Gimme Metal was the community they launched first in June of 2017 — a 24/7 metal-focused service with well-known metal figures acting as DJs, accompanied by an opportunity for the fans and DJs/artists to interact in real-time while they listen.

As mentioned above, a big part of what made our first two appearances so much fun for us was the process of choosing songs. The first time we did that, it was in blocks, with each block of songs chosen by one of the three of us, segmented by commentary from the person who did the choosing. The second time we switched things up, stewing our three separate playlists together and engaging in 3-way dialogue during the voice-breaks. And we decided to keep it that way for the upcoming third edition.

Andy and DGR have chosen new strategies for the songs they picked this time, while Islander has once again decided to stay with more recent tracks for all of his picks, most of them already on his group of candidates for 2021’s Most Infectious Extreme Metal Songs.

If you register (for free) on the Gimme Metal Desktop site or the Gimme iOS/Android app, you will also be able to chat with us in real-time as the show progresses. If you didn’t sign up the last time, you can download the app or register online here:

Once again, we really do hope you’ll participate, and at least listen to what we’ve chosen to play for you, though the chat dialogue should prove to be a lot of fun too.

If you can’t make it at air time, the show will be re-broadcast, and we’ll update this post once we figure out when that will happen.