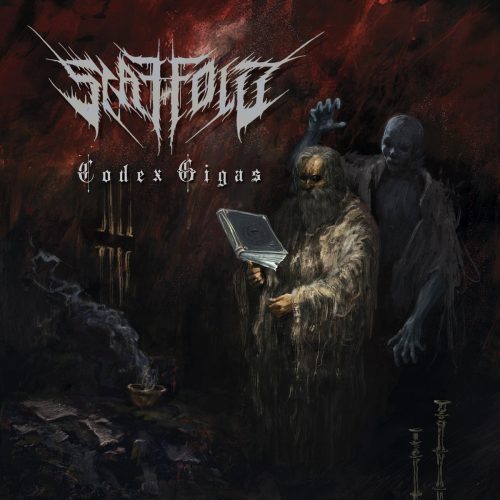 As we all know, revivals by long-defunct metal bands are hit-or-miss affairs, even when the bands in question were vital in the spawning of much-beloved sub-genres within their countries (or globally) many decades ago. Talents fade, interests wane, sometimes the music seems like a pale re-tread, sometimes the effort to stand out again falls flat in a world that has moved on. But every now and then a revival proves to be a glorious occasion — and that has definitely proven true for the Serbian band Scaffold.

Born in Belgrade in 1992, the band put out their first demo that year and followed it in 1994 with a debut album named The Other Side of Reality. But by 1996 the band had dissolved, and remained dormant for a dozen years. After taking shape again in 2008, Scaffold began performing live once more, but new recorded music still didn’t surface until 2015, with the first of a few short releases.

However, on March 31st the second Scaffold album, Codex Gigas, will be released, 17 years after the first one — and it’s remarkably good. You’ll discover just how good it is today, because we’re presenting a full stream of all 8 tracks. 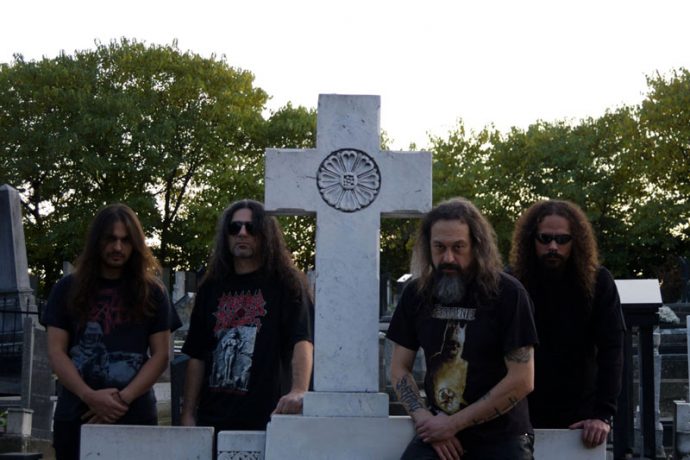 The revived Scaffold has been built around the talents of founding guitarist/vocalist Ivica Dujić, who is now surrounded by a trio of obviously very talented new allies. What they’ve achieved on the new record is a display of veteran, metal-loving spirit, multi-faceted song-writing, and top-shelf instrumental skill.

The songs have a backbone of bone-smashing, adrenaline-fueled death/thrash, but they’re fleshed out with a multitude of other ingredients that include anthemic heavy metal chords, paranormal keyboards, exotic serpentine melodies, and big doses of jaw-dropping guitar soloing. You can tell that the musical passions of these dudes are wide-ranging and even pre-date the flourishing of extreme metal in the ’90s.

The tracks are also packed with turn-on-a-dime tempo changes, rapidly morphing fretwork, and changing moods, all of which will likely keep listeners (and especially lovers of old-school metal) both alert and spellbound from start to finish.

The album ends with “Rotting In the Rain”, a mysterious and mesmerizing acoustic guitar instrumental that flows through the sounds of lightning and rain. But up to that point, every song is a thrill-ride, beginning with the one-two punch of “The Butcher of Rostov” and “1763 (Consecrated Ground)”.

“Butcher” begins with an exotic lilting guitar arpeggio against a backdrop of screaming women, but becomes a galloping race, packed with skull-punching drums, darting and skittering riffs, and savage growls. The music is given extra fieriness by a flame-throwing, fret-melting extended solo — which drifts away in a ghostly wail as the pacing slows and the music becomes more demented. An ethereal keyboard motif rears its spectral head, leading the music into another hell-for-leather charge.

As bracing an opener as that song is, “1763” might be even more electrifying (and proves to be highly infectious too). It’s another fast-paced, fast-changing race (but with immediate tempo changes), and it again benefits from plenty of fast-twitching fretwork as well as elements of menacing and sorcerous melody, arena-sized heavy metal chords, and a highly head-bangable chugging breakdown. The band again judiciously use swirls of eerie keyboards to create supernatural atmosphere, and blow up the listener’s blood-stream with another spectacular guitar solo.

There really aren’t any weak links among the songs that follow those two, and as noted above, the band weave together so many changes within each one that they don’t wear out their welcome — to the point that calling the album “death/thrash” is likely to be misleading, because things just aren’t that simple. “At The Dawn Of A Judgement Day”, for example, stands out in part because it repeatedly segues into slower haunting passages laden with misery, and the soloing is soulful and grief-stricken as well as berserk. But that kind of dynamism is a hallmark of all the songs.

Mention should also be made of Scaffold’s great cover of Bloodbath’s “Psychopathic Mind”, in which the band put their own distinctive spin on the original (and Dujić’s vocals do indeed sound psychopathic).

So, with that we’ll leave you to the music and our wish that you enjoy Codex Gigas as much as we have. The album is being co-released by Satanath Records and The Ritual Productions, and it’s available for pre-order now.