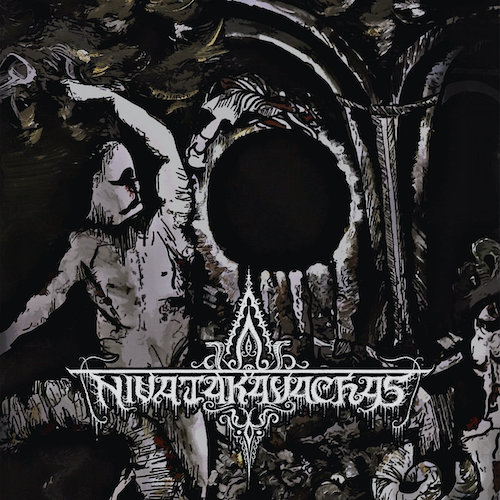 The creative energies of Swiss artist Bornyhake Ormenos seem boundless, and so multifarious that each impulsive surge of them may give rise to some new project, which seems to be the case in the spawning of his solo project Nivatakavachas.

Undoubtedly, this new menace has been gestating for some unknown period of time, building up its stockpile of evil power, but it is now ready to be revealed through a debut album named Ascraedunum, set for release by Satanath Records and Azif Records tomorrow (April 6th). One day early, we have a full stream of it for you. 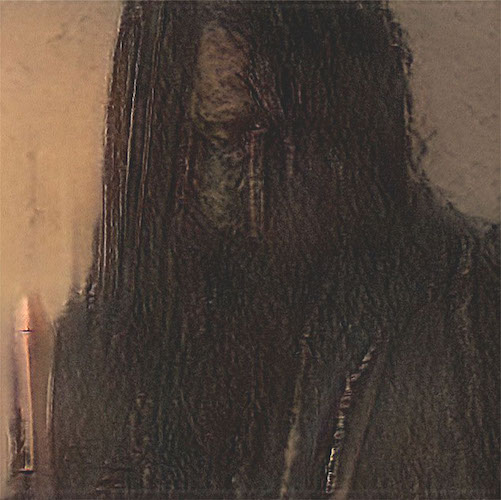 “Atmospheric death metal” is inscribed on the the advance banners for the music, and it is that, but it is also viscerally brutal and stunningly malevolent. Its storming assaults are devastating in their intensity, generating vortexes of all-consuming turbulence and unreasoning savagery.

That in itself is an “atmospheric” quality, but it’s more likely that the term derives instead from Bornyhake’s incorporation of musical elements that also make the music seem pan-dimensional, parting veils into blood-freeing realms where diabolical spirits wail and unearthly powers spread their wings in terrible grandeur.

It’s a 34-minute album, but divided among only three songs. They will test your endurance.

The rhythms also jolt and jar, stagger and lurch, spit bullets and crawl through tar, and the music becomes eerie and unsettling as well as reverberating in ethereal, chime-like whispers. The combination of cold, oppressive, gut-gouging heaviness and startling, celestial brilliance makes for a riveting contrast.

“Oneiromancy” combines similar but slightly variant ingredients. It hammers like overdriven pistons while exhaling a groaning miasma of sickness, and it also delivers seizures of glittering effervescence that are somehow both wondrous and unnerving.

Sweeping waves of hopeless melancholy and blistering lunacy cascade over punishing drum-work as the vocals vent ravaging roars and paralyzing screams. The rhythms shift into a strange gallop as the riffing buzzes like flesh-eating hornets, and the song ejects double-kick munitions while those high flickering tones become spasms of pain.

The vicious turbulence and turmoil of the song are unabating, and yet the music again soars in nova-like brilliance, painting vast nebulae in sound.

While the first two songs are both nearly 10 minutes long, the last of the three clocks in at 14 1/2 minutes. “Hepatoscopy” wastes no time resuming the assault of voracious growls, pummeling percussion, groaning and grinding low-end currents, and soaring, sparkling spectacles high above. The pounding and slashing chords and fast-pumping drums are mercilessly brutal, in contrast to the wraithlike unearthliness and blazing sheen of other aspects of the music.

The constantly changing drumming reaches heights of maniacal, bone-smashing slaughter, and at times the riffing sounds like boiling poison, while the vocals are as tyrannically monstrous as ever. It’s a tumultuous vortex of menace and violence within a shroud of supernatural light, urged on by wailing specters — and if you’re waiting for some kind of relief, it really doesn’t ever come, even at the end when the drums vanish and terrorizing hallucinations descend.

One Response to “AN NCS ALBUM PREMIERE (AND A REVIEW): NIVATAKAVACHAS — “ASCRAEDUNUM””