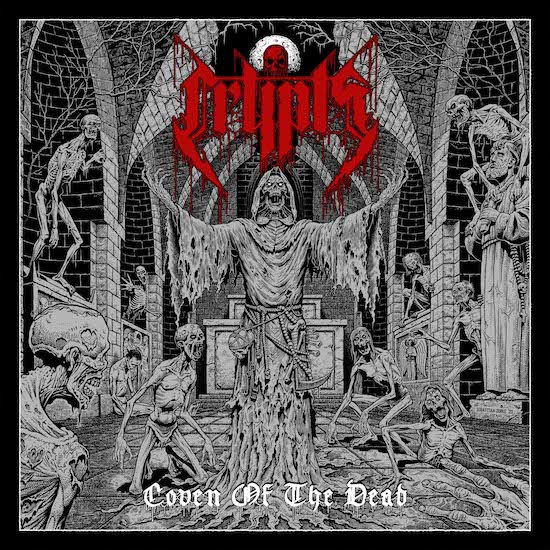 That album quickly proved that Crypts have developed a mastery of an old style of death metal spawned at the end of the ’80s and the early ’90s — a style epitomized by such bands as Autopsy, Bolt Thrower, Morgoth, and early Entombed (among others). It’s a stripped-down, viscerally compelling, and yet atmospherically evocative style, and though Crypts haven’t reinvented the wheel, they’ve kept it moving with crushing power and sharpened it to a lethal edge.

For those who haven’t yet discovered the gruesome, bone-smashing power of that album, we have for you today a great enticement for it — the premiere of an official video for the song’s horrifying title track. 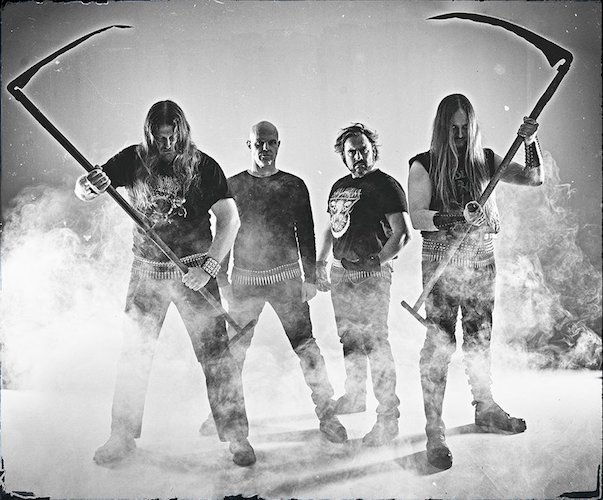 Displayed in good old black and white, the video combines film excerpts of ghastly, flesh-eating void ghouls with footage of the band performing the song with expected ferocity and iron-fisted fervor.

The song itself succeeds on at least three levels. On one level, it’s a physically compulsive mid-paced bulldozer whose skull-busting drumwork, gut-slugging bass lines, and jolting riffage will give your neck an excellent workout. On a second level, the quivering keyboards and glimmering guitar leads generate an eerie, spine-tingling aura of the supernatural, of decayed corpses rising from cemetery earth and wraiths encroaching upon the human world like poisonous mists. And on a third level, the savage vocals, which straddle a line between a snarl and a scream, add elements of malignancy and furious belligerence.

Even when the drummer unleashes a fusillade of double-kicks and the riffing becomes a feverish scissoring sensation, coupled with the anguished wail of the lead guitar, the music still channels the same message (which we borrow from Dante): Abandon hope all ye who enter here.

The message of the band that accompanies the video is this: “Dread lurks in the depths of the crypts! Are you ready to face darkness, death and damnation?”

Our answer is hell fucking yes.

Coven of the Dead is available now on CD, vinyl, and digital formats. You can pick it up via the links below. And if further enticement is needed, we’ve also included the official video for another album track, “Paura“.