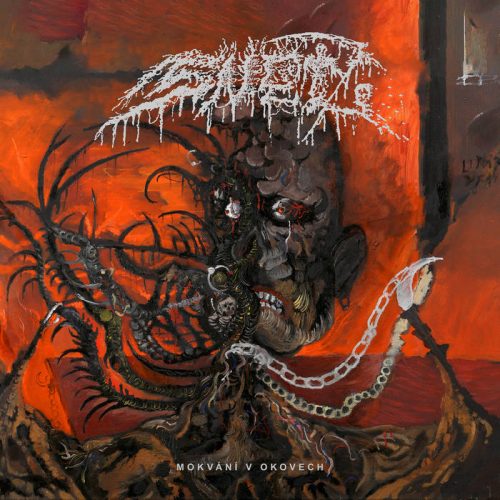 The Czech death metal band Sněť released a promising demo in 2019 (which we reviewed and streamed here.) and they had planned to follow that with an EP, but their drummer’s broken leg and a global pandemic interfered with those plans. In this case, however, there was a silver lining to the cloud, because the band used the time to write and eventually record more songs, enough to fill out a compact debut album. Entitled Mokvání V Okovech, it’s now set for release on May 14th via Blood Harvest Records on CD and vinyl LP formats, with a cassette version handled by Lycanthropic Chants in Europe and Headsplit Records in the US.

Two arresting album tracks have premiered so far, and today we bring you a third one, accompanied by a DIY video that gives you a chance to see the band in action. This song is “Folivor“. 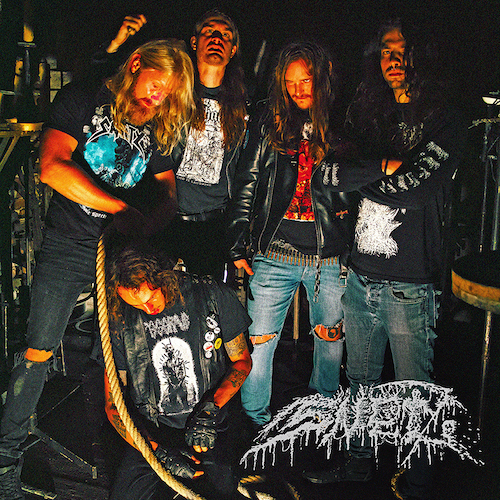 Sněť have drawn their inspirations from such bands as Undergang, Funebrarum, Autopsy, and Carcass, and have molded those influences in a way that both creates ghastly atmosphere and administers severe beatings, and includes so many visceral hooks that the music is also severely infectious. “Folivor” is a prime example.

In this new song a big gnarly and gnawing riff backed by a head-stomping beat sets a monstrous tone, eventually accompanied by equally monstrous abyssal growls. The band also throw themselves into seizures of battering percussion and frenzied fretwork derangement, as well as infiltrating the song with slithering, serpentine melody backed by double-bass kicks and neck-snapping snare work. And thus, altogether, the song generates a ghoulish and diseased atmosphere, mercilessly pounds the listener’s spine, and generates bursts of adrenaline through wild spasms of violence.

The first two songs that surfaced from the album are also grimy, ghastly, and crushing. The full-bore drumming in “Kůň Kadaver” (the first single) truly does hit like a high-caliber automatic weapon, and the blaring riff that opens the track seizes attention immediately. And then the song becomes a juggernaut crusher, with rock-grinding bass lines, pile-driving grooves, and brutish stomps alternating with galloping beats and deep, drilling chords. Spurts of boiling guitar work continue to give the music a feeling of destructive madness, and a quivering solo adds an atmosphere of the supernatural. Once again, the vocals are just goddamned monstrous.

You can also visit MetalBite.com (here) to check out the second single, “Zamrzlý Vrch“, which premiered there. It delivers yet another rhythmically dynamic discharge of murderous and mauling extremity, which soars to a zenith of lunacy through a maniacal guitar solo and also descends to depths of shivering misery.

The album is graced by the cover art of Tomáš Mitura. As mentioned at the outset, it’s available from Blood Harvest on CD and 12″ vinyl, as well as digitally, and cassette editions will be forthcoming from Lycanthropic Chants in Europe and Headsplit Records in the US.