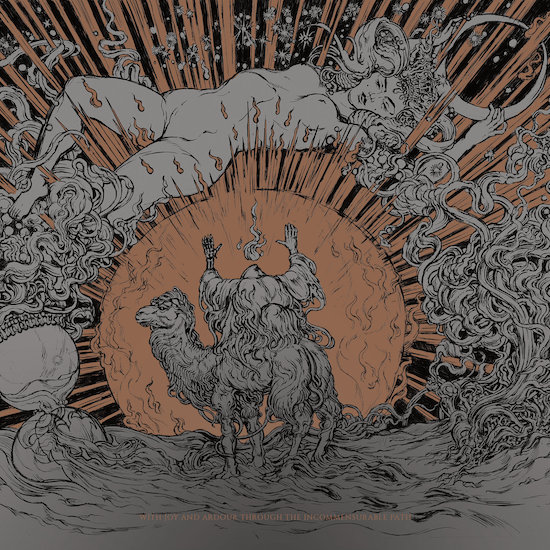 We’ve all had the experience of being misled by PR descriptions of forthcoming metallic extremity, when the night-blooming rhetoric proves to be an exaggeration or a calculated inaccuracy. And so we take such linguistic previews with a grain of salt, even when they generate a reflexive eagerness to listen.

In the case of the new album by the Italian death metal band Hadit (from Varese), the advance press variously portrays the music as “an obfuscating spell of dark cosmological death metal destruction”, “occult ritualistic divinations of total aural chaos”, “sonically annihilating and aesthetically majestic”, “impenetrable and supernatural”, and “hallucinations shrouded in mysticism and esotericism”.

How sad it would be if such evocative and enticing written flourishes weren’t well-founded! Even though Hadit’s last release, the 2015 EP Introspective Contemplation of the Microcosmus, already provided a solid foundation for those descriptions, that was six years ago after all. The question is whether their debut full-length, With Joy and Ardour Through the Incommensurable Path, lives up to the advance billing.

Well, you know where we’re going with this: The answer is Hell Yes It Does. The fact that it’s being jointly released (on May 7th) by such tasteful labels as Caligari Records, Sentient Ruin, and Terror From Hell Records is evidence of that, and so is the song we’re premiering today: “The Quest for Hearts and Conquest of Time“. 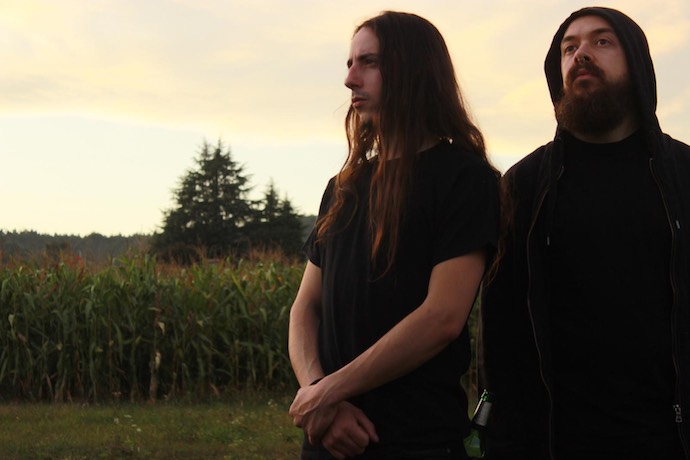 The song summons terrifying visions, just as it summons remembrances of such bands as Incantation, Morbid Angel, Immolation, and Archgoat. An unsettling mass of roiling, distorted riffage punctuated by deep drum thumps begins the track and then becomes more feverishly unnerving just as the drums accelerate and the gruesome growls come in. The guitars writhe and scream, rake and jab, as the drummer ejects bursts of booming thunder and the vocalist shrieks and bellows.

The unpredictability of the drumming within the miasma of poisonous fretwork is continually attention-grabbing (and occasionally neck-wrecking), but the presence of actual riffs within the mauling dissonance and discordance lifts the song as well, while also continually shifting the mood from violent, venomous madness to sensations of mind-mutilating dread and fetid rot.

Hadit took their name from that of a Thelemic deity in Aleister Crowley’s The Book of the Law, and they have continued to draw inspiration from the works of Crowley, Lovecraft, and other elements of occult and mystical literature, translating the messages they’ve taken from such works through music of primeval and pestilential power. Further proof of that can be found in the previously premiered track “A Digression and Her Eternal Domain Above the Atmosphere“:

It’s thus fair to say that we haven’t been misled. If you’ve been left as eager by the music as you might have been by the words, you can pre-order the new album now:

One Response to “AN NCS PREMIERE: HADIT — “THE QUEST FOR HEARTS AND CONQUEST OF TIME””