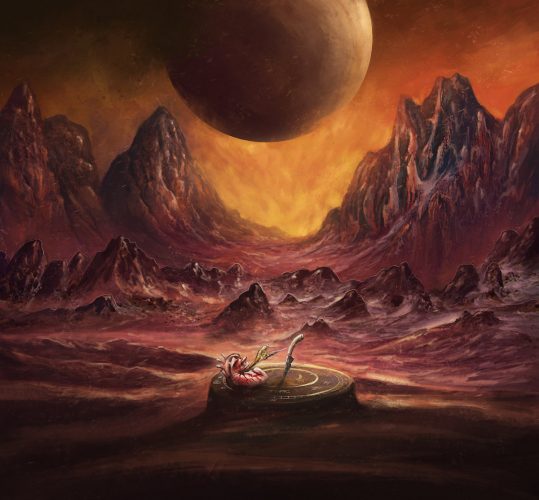 On May 25th the Boston-based death metal band Graveborn will be releasing their fourth album, Transmigrator, which they describe as “a continuous play concept about eternal cycles, the ever-changing self, and its place amongst billions of others”. It also reflects the band’s own cycles and the changes in their musical approach that have evolved since the release of their first single in 2012.

Once a deathcore band, Graveborn have moved away from that style and more toward a form of death metal that is in some ways reminiscent of the likes of Fallujah — though they still prove themselves capable of giving listeners a vigorous beating. The song we’re premiering today, which is the album’s title track, is a prime example of the band’s different (and divergent) musical facets, and it comes with a lyric video that makes excellent use of Mark Erskine‘s eye-catching cover art. 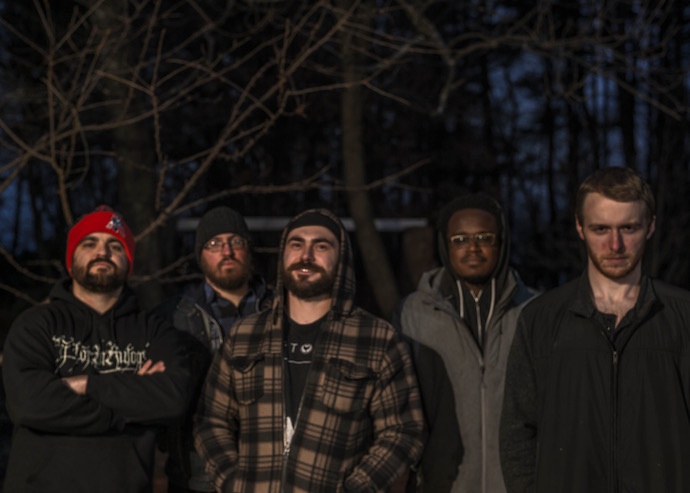 This highly addictive new song is a study in how to combine contrasting elements in complementary ways that together make for an experience that’s viscerally thrilling but also sparks the imagination.

On one level the song is a turbocharged onslaught of hard-hitting grooves and blood-rushing energy. The snare drum pumps like a piston, alternating with kick drums that viciously batter, and the opening riff creates a vivid, darting sensation that gives the music a vibrant and highly infectious pulse. The “physical” impact of the song is almost unrelenting, augmented by start-stop bursts of atonal jackhammering brutality.

But on the other hand, eerie and ethereal guitars slither through the clobbering high-speed attack, hinting at further elements of off-planet atmosphere to come. The riffing begins to writhe and roil, adding a feeling of darkness and anguish, and then the the music begins to soar above the pulverizing rhythms in long, slow, wailing waves of astral wonder, leading into a mesmerizing guitar solo that’s beautifully fluid but also scintillating.

Through it all, savage vocals eject the lyrics with raw, vehement passion.

We’ll also share these comments from Graveborn about the track you’ve just heard:

“‘Transmigrator‘ exemplifies the central theme of this album, and of Graveborn in general: constant self improvement through iteration on previous failures and successes. No one is the same person they were a few years ago, or maybe even a few months ago, and usually the way we learn quickest is through our mistakes. In addition, every individual is building on the work of people who came before them. We’re part of a series of cycles, both personal and universal, in which many things about ourselves change, but there’s a fundamental thread that remains the same throughout. Transmigrator is a meditation on cycles of many scales, including our own journey as a band.”

Transmigrator was recorded at The Brick Hithouse by Shane Frisby, and was mastered there by Shane Frisby and Pete Rutcho. As mentioned at the outset, the great cover art was created by Erskine Designs. The album is available for pre-order in CD and digital formats, with apparel.

Below we’re also including a stream of the first single from the album, “Coded Collective“, which premiered at Toilet Ov Hell.