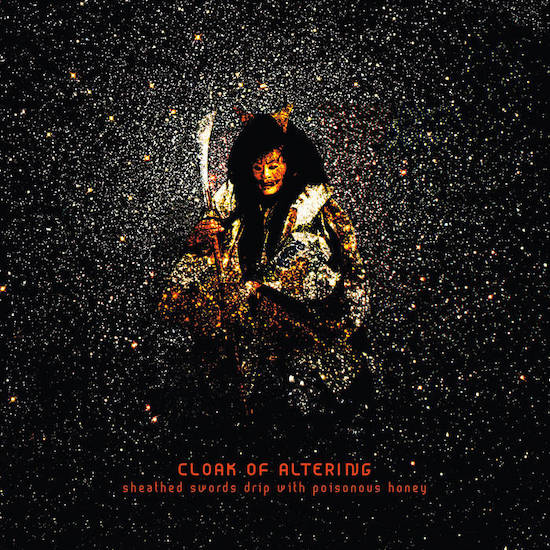 In the neverending musical combat between catharsis and comfort, byzantine boundary-stretching and banal convention, Cloak of Altering continues to leave no doubt where its allegiances lie. In the band’s eccentric and perpetually experimental maneuvers, it seems dedicated to rooting around in our subconscious in a way that makes it difficult to keep certain things buried that perhaps we’d rather remain hidden, just as it provides a necessary outlet for its creator’s own unsettling and unpredictable impulses.

Yet every new excursion by the band provides a multitude of fascinations, no matter how disorienting they may become, further proof of which is provided in Cloak of Altering‘s new album, Sheathed swords drip with poisonous honey (set for release on June 4th by Brucia Records).

We have the premiere of a song from that album for you today, “The Jesuscraft“. The opening line of our introduction, which is a few paragraphs below, is this: “The song seems diabolically calculated to keep listeners continually off-balance.” Perhaps, then, there is some hilarity to be found in the comment about the song from Cloak of Altering‘s alter ego Mories (the fiendish mind also behind Gnaw Their Tongues, The Sombre, The Night Specter, Hagetisse, and Golden Ashes, among other projects): “The Jesuscraft is the most straightforward song on the album.” 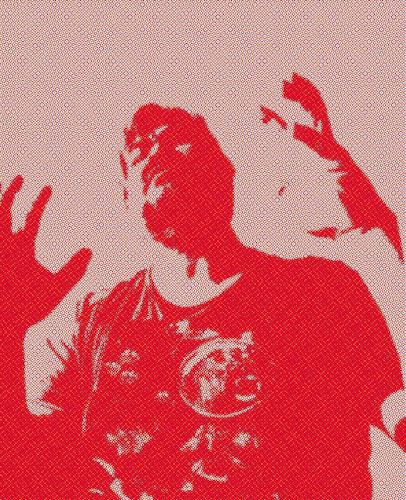 Mories also introduces the song with these additional words: “A vessel made from flesh. An idea eraser. Stream of conscious lyrical insanity…. The song is built in a way that it mimics two songs being sliced together. The sound mimics the organic / low-fi productions of early nineties black metal. The riffing is pretty complex but also melodic and catchy.”

And now here are our own impressions:

The song seems diabolically calculated to keep listeners continually off-balance. It transmits varying tonal, vocal, and rhythmic sequences, each with different emotional radiations, interlocking them with the occasional reappearance of the feverishly berserk, fire-bright motif that opens the track in media res. That opening sequence, with drums blasting, the bass surging, and the voice screeching, is gloriously unhinged and ecstatic — but as the variations begin, it grows more unnerving and frightening, and then segues into shining cascades of quivering, queasy, ominous melody and demonic muttering.

So many more changes lie ahead, each of them underpinned by fascinating permutations in the bass and drum patterns. The music rings and reverberates, sounding bright and wondrous (but unearthly), as well as tormented and calamitous, oozing misery and pain. Gargantuan growls increase the fear factor over weirdly musing electronic tones. All hell breaks loose in a cacophonous paroxysm joined by harrowing roars… and then the song drifts away in a collage of eerie organ-like tones and strange, low-frequency undulations.

The experience straddles a line between mesmerizing and monstrous, creating a kind of paranormal, disturbing fascination that only grows stronger once it becomes evident that you don’t really know where this composition is going or what will come next.

Sheathed swords drip with poisonous honey is Cloak of Altering‘s seventh full-length; Mories himself created the cover art and sleeve design. It’s available for pre-order now — and we’ll give you a peak at the CD edition: 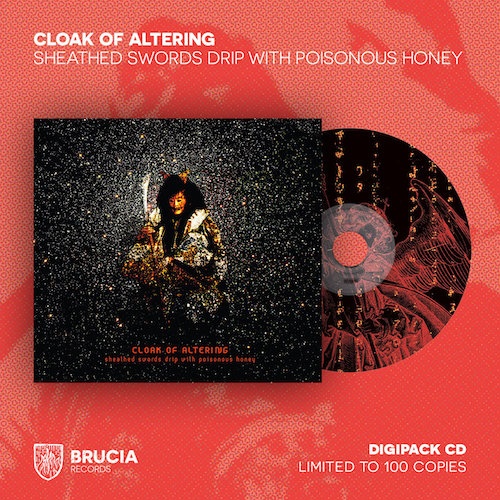 As a way of testing Mories‘ statement about the song we’re premiering, below we’ve also included streams of two other, previously released, tracks: “I have missed the light so much” and “Splendid euphoria of murdering ravens“.