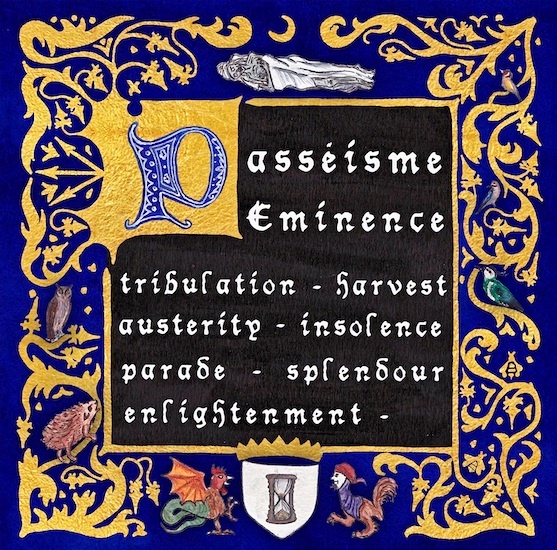 The French label Antiq Records has become a paramount global source for medieval black metal (though not only that), and while the label tends to focus on the music of distinctive French bands, its forthcoming release of the debut album by Passéisme shows this is not exclusively true. Granted, the band chose a French name and have drawn upon French poetry for some of their inspirations, but this trio make their home in Nizhny Novgorod, Russia.

Passéisme’s debut album Eminence (which follows their 2019 demo Austerity Parade) is a sequence of seven Chants, but while there is a sense of nostalgic reverence for older eras that does emerge in the music, these are not sedate or sober recitals. They are instead usually fast, fierce, and often explosively ebullient, the kind of music that super-heats the blood and spins the mind, while the lyrics often reflect savage condemnation. We have a prime example of this in the lyric video we’re premiering today for “Chant For Parade“. 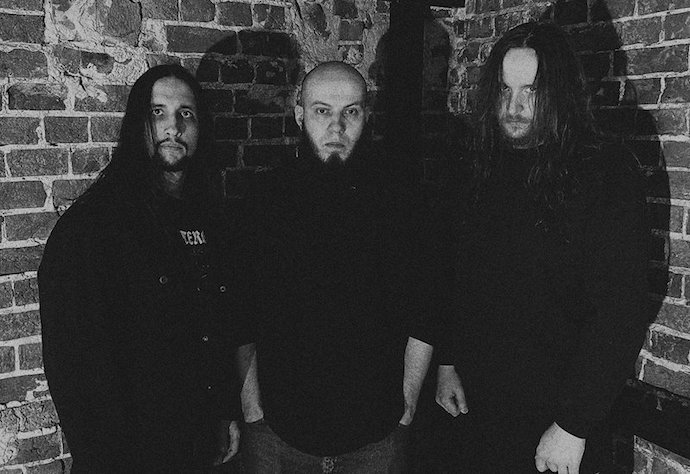 This new song quickly rises in a furious blaze, the torrential guitars searing the senses like a glorious sonic bonfire, the drums pounding and hurtling with electrifying, pulse-pumping power, the bass rumbling like a maniacal rock-crusher, the vocals discharging raw, hoarse, throat-splitting vitriol. Exultant guitar leads spiral up through the white-hot gale of sound, and the music reaches new heights of unchained, writhing ecstasy.

When the music’s intensity diminishes, the melody more clearly reveals an ancient and more solemn dimension, but only as a brief and somewhat melancholy interstitial before the fires of passion break out again. Head-moving beats accompanying the guitars in a wild, whirling and darting dance, and while the vicious words are as caustic as acid, the music is still a glorious riot of exultant sound.

In creating Eminence, Passéisme drew inspiration from Guillaume Apollinaire’s poetry “Avenir” for the first song released from the album, “Chant of Harvest”. To learn more about Apollinaire, who was a forefather of Surrealism (he is credited with coining the term), was seriously wounded in World War I, and perished in the 1918 flu pandemic, go here. But his poetry is not the only inspiration for the album’s music — Arthur Rimbaud, whose photo at age 17 appears in the video, is another.

Eminence is set for international release by Antiq on June 11th. The cover art was created by Hyver Mor. The album includes guest appearances by him and by Sparda and Geoffroy Dell’Aria.

After the links below we’re also including the lyric video for “Chant for Harvest“, a less incendiary but still thoroughly thrilling experience, a kind of mad and captivating waltz punctuated by flurries of double-bass, blast-beats, deranged riffing, and accompanied by rippling, piercing, heart-palpitating melodic leads that sound joyous, and by crazed wolfish howls.

2 Responses to “AN NCS VIDEO PREMIERE: PASSÉISME — “CHANT FOR PARADE””