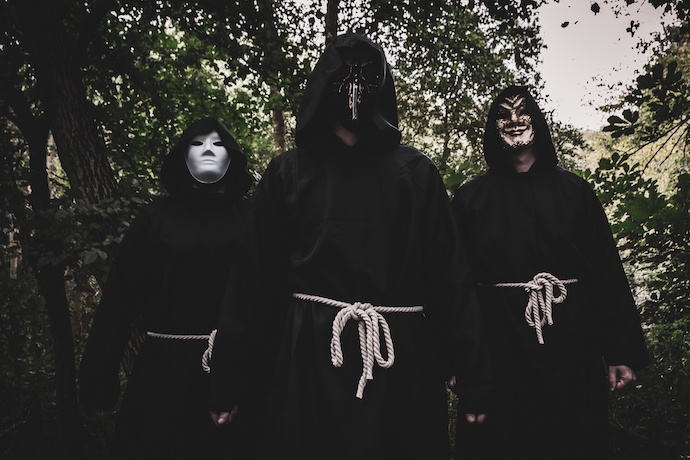 We don’t know the identity of the masked members of Epiphanic Truth. We’re only told by the band’s label Church Road Records that they come from “a number of former and established acts” — a claim that’s easily accepted based on what they’ve created on their debut album, because it’s so mind-blowing on so many levels.

That album, Dark Triad: Bitter Psalms To A Sordid Species, is an exceptionally ambitious, strikingly adventurous, remarkably multi-faceted, and utterly captivating experience, and so accomplished in its conception and execution that it would come as no surprise to see it appearing on numerous year-end lists — if only word of its existence spreads far enough.

We’re damned well going to do our part to help spread the word, through a great torrent of our own words, but mainly through our premiere today of a full album stream in advance of the May 21 album release by Church Road. 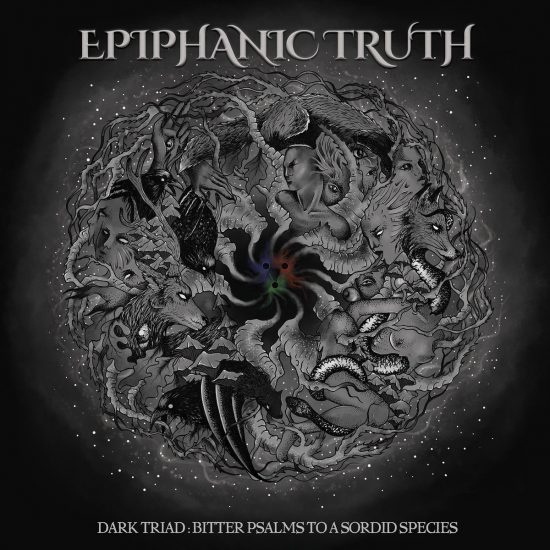 The inspirations for Dark Triad… have been described to us as follows:

“The album is a conceptual Triptych, hinged together by the dark triad of personality disorders – psychopathy, narcissism and machiavellianism. Each point converging over the political future of civilizations enthralled by Social Media. An efficient, consistent barrage of misinformation creating a Hyper-normalised environment that nurtures an ever greater detachment from reality. As it becomes harder to discern what is and isn’t true, as all manner of extremes draw in more proponents, the ‘strong’ will continue to crush the ‘weak'”.

Stylistically, the album draws on a multitude of genre ingredients, including death metal, black metal, doom, and psychedelia — along with elements of jazz, chamber music, EDM, and ambient/noice music. What the band have done might make you think of a collaboration among Akercocke, Esoteric, and Enslaved, or maybe (to drop the names of some newer bands) a free-flowing union of Oranssi Pazuzu, White Ward, and Ulcerate.

We should also mention up-front that Wilfred Ho of Karmacipher performed session drums on the album, and his tremendous performance repeatedly threatens to steal the show — but the rest of the show is so extraordinary that he’s really just doing a great job of helping to bring an already-remarkable vision to life. 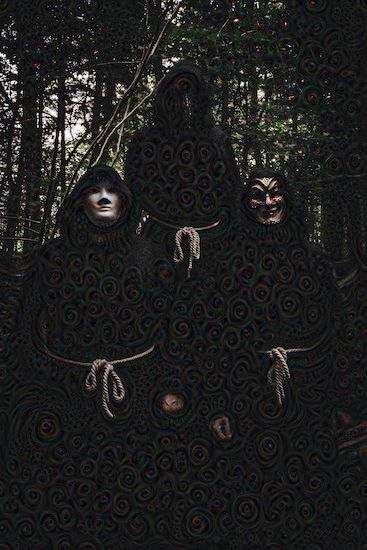 Dark Triad… consists of three tracks of escalating length, beginning with one of nearly 10 minutes, then roughly 11 1/2, and finally a mammoth closer of almost 22 1/2 — and they all flow into each other, creating a roughly 44-minute suite of astonishing adventures. As someone who is usually deterred by tracks of such length, I can assure you that you won’t know where the time went, and if you’re like me, the first thing you’ll want to do at the end is start over again. I also urge you to experience this as it was intended, and set aside the time needed to listen straight through.

And now, though completely unnecessary, here is the promised torrent of further words about each movement in this suite.

“The Truth Of The Beast”

This track opens in a storm of riotous drumming, darting and grinding riffage, and vehement growls that flare into fierce screams. The guitar leads swirl and spiral in exultant fevers, and clean vocal harmonies soar. Desolate chords draw a cloak of darkness over the mood, reverberating over thundering double-kicks and catapulting snare work. Fretwork spasms and bursts of quivering, yowling, and abrasively screeching melody generate feelings of tension and misery against a backdrop of slow percussive detonations — and suddenly everything vanishes, replaced by the ringing of gossamer-light keyboard tones, glinting zither-like strums, and sedate jazz-influenced drum patterns. That interlude is a soft and silky experience, but things become frightening as eerie whistling ambient sounds generate visions of wraiths on the move.

As the first track segues into the second one, a collage of twisted organ-like discordance leads into neck-snapping snare drums, gravel-chewing bass rumbles, weird dissonant leads, and crocodile-throated pronouncements. Shimmering tonal waves wash across massive low-end rumbling and gun-shot drum bursts. Extravagant screams rise above long, moaning chords and riveting drum progressions that spawn thoughts of tribal, shamanistic rituals. Increasingly shrouded in mists of otherworldly shimmer, these sensations collectively create an unsettling, pulse-pounding spell. An exotic keyboard and saxophone melody with an Eastern flair sways like a cobra, and that melody evolves in a way that groans and heaves, sparkles and scintillates, sending the music to heights of perilous, poisonous majesty, ending in the doleful wail of diminishing keys.

“Our Vile Roots Flourish Beyond Light”

As we enter the final, mammoth track, synths create an astral evanescence, and a feeling of swelling wonder. A slow piano melody emerges to bring grief to the scene, just as the ambient sounds become more tormented in their mood. When the drums begin to tumble, the guitars whine and the bass groans, and clean vocal harmonies lead the music to a higher plane. The bass vibrantly bubbles, the guitars swirl in thrilling fashion, and harsh screams scrape a throat raw. Blasting drums, blaring guitars, and intense, bellowing roars create a surge of harrowing but electrifying intensity. The lead guitar spasms and skitters, and becomes a fiery, flickering, deranged presence, paving the way for an extravagant performance by the rhythm section that threatens to steal the spotlight away from a repeating motif of dissonant, demented guitar contortions.

Almost halfway through, the torrential assault briefly fades away, and what takes its place is an almost joyful gallop. The guitars ring in glimmering splendor, clean vocals carry a seductive yet despairing melody, and perhaps it’s a saxophone that returns to propel the music to greater heights of intensity. But the band slowly take a turn into increasing darkness, with a jabbing riff; bounding, ritualistic beats; and a jolting, lead-weighted bass line. That sequence cycles over and over again in a way that will get heads moving. Like a psychedelic sunrise, a wash of swirling guitars adds an un-real kind of splendor to the music’s visceral pulse.

When the cycle breaks, the mood of the music changes again, becoming more suffused in gloom and dread, but also channeling ominous grandeur. It sounds simultaneously like an avalanche and the rising of a towering monolith through the rubble. The guitars ring in a semblance of eerie, spine-tingling glory, and then fade away in chilling fashion.

For better or worse, we’re told that Epiphanic Truth have sworn never to play live but to “provide an aural and visual assault against the current, malignant zeitgeist and a dire warning of how History does not repeat, it rhymes.”

Church Road Records will release Dark Triad… on CD, LP vinyl, and digital formats. Get your pre-orders in now:

One Response to “AN NCS ALBUM PREMIERE (AND A REVIEW): EPIPHANIC TRUTH — “DARK TRIAD: BITTER PSALMS TO A SORDID SPECIES””