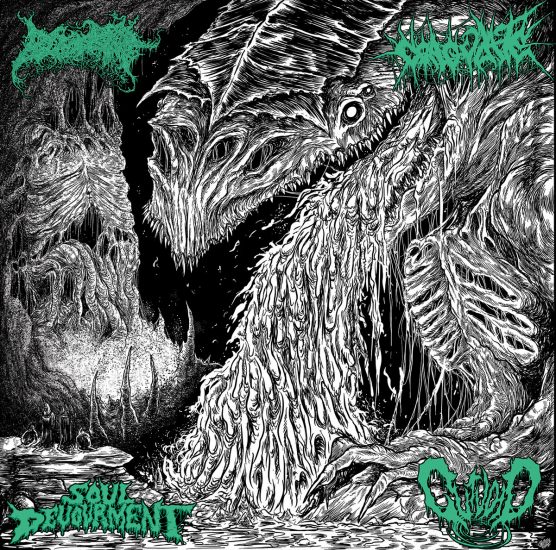 Over the last couple of weeks our friends at CVLT NATION have been premiering, one by one, the four ravaging tracks that make up 4 Dimensions of Auditory Terror, a four-way split that’s being released today in a variety of formats by a consortium of labels — Sewer Rot Records, Rotted Life, Blood Harvest, and Black Hole Productions. The participants in this terrorizing 32-minute assault are Blood Spore, Coagulate, Soul Devourment, and Gutvoid.

To celebrate this ghastly event we’re presenting all four tracks from the split in one place, along with new commentary from the bands and our own impressions of each song. Collectively, they make for a listening experience that’s as electrifying as it is mind-mauling, and a showcase for the talents of four up-and-coming death metal bands who deserve a lot more attention.

We usually provide pre-order info at the end of our premieres, but we’ll leave it here instead, for ease of reference:

And now, onward to the music…. 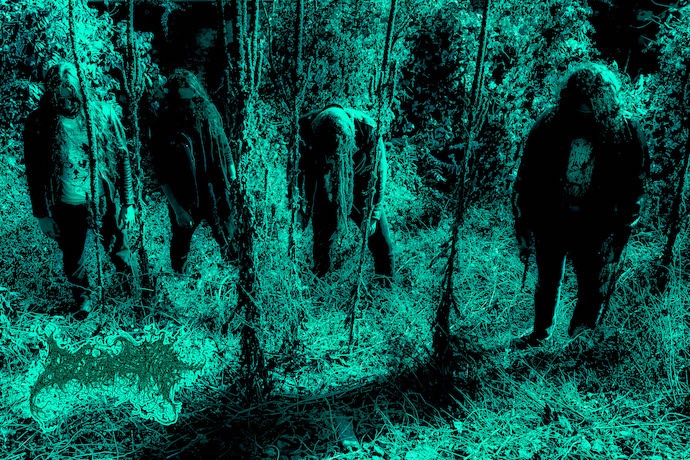 We’ve been paying attention to Philadelphia’s Blood Spore since their striking 2019 debut EP, Fungal Warfare Upon All Life (reviewed here). Their new song for this split is “Olfactory Cordycipitaceae Ingress“. Bassist/vocalist Chris Emerson provides these insights into the song’s fascinating themes:

“OCI is a song primarily about the Cretaceous–Paleogene extinction event in which most life on Earth was ended, including most land-bound dinosaurs. The title refers to spores that produced cordyceps fungus inside the organs of any species they came into contact with at that time period, causing myriad heinous effects. The spores entered these organisms via insufflation at landfalls of mass graves and enormous flora across the world.

“The song begins in the mesozoic period, where massive carnivorous species of all kinds begin to kill for sport, amassing their dead at what the song refers to as “molting trees of strangling fruit”. The will of the spores begins to orchestrate the separation of Pangea, and it becomes apparent that dinosaurs will not be able to accomplish the spores’ goal of planetary escape. It prepares the planet for a new dominant species before its long hibernation. Volcanic and tectonic activity riddle the landscape, ultimately ending in a charred and violent landscape. While this song takes place during the early stages of life on Earth, it reflects an ultimately non-linear bond within the split itself.”

In keeping with the conceptual theme, the music consists of multiple movements — none of them comforting. At the outset, heaving, uber-distorted riffage and wailing, glimmering tones spill out over gun-shot drum cracks. It’s a dismal sensation that evolves in even more harrowing and abrasive tones, accompanied by macabre, vitriolic snarls. The drums pound and clobber, and the guitars transform the core melody into spasms of derangement while the rhythm section inflicts pile-driving punishment. The riffing generates a miasma of pestilential, swarming sound, punctuated by febrile jabbing sensations as vocalist Emerson continues his hateful vituperations.

To pick a metaphor different from the song’s actual theme, the song reaches a point when it sounds like the inhabitants of a disease-ridden madhouse violently coming apart in the midst of an earthquake — and then the music descends into a tar pit of misery. The drums are no less spine-snapping, but the clawing and skittering guitars create moods of decay and despair — and all hell also periodically breaks loose in paroxysms of guitar frenzy and bludgeoning, battering percussion. Near the end you’ll have a fine chance to bang your head, even as your guts are being roiled by the song’s unsettling queasiness and frightening viciousness. 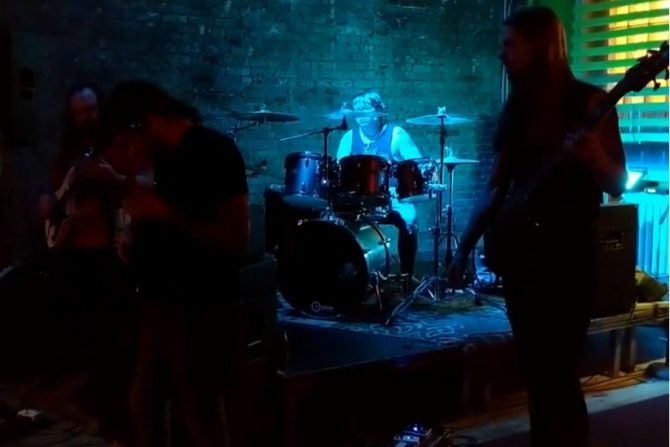 Minneapolis-based Coagulate follow Blood Spore‘s long track with one of their own — “Up from the Vats (Coalescence of Metamorphic Human Flesh Within a Gelatinous Fetal Stew).” We got a substantial comment about the horrifying lyrical themes of the song from vocalist/lyricist Andrew MV, which is well worth reading:

“Up From the Vats (Coalescence of Metamorphic Human Flesh Within a Gelatinous Fetal Stew)” concerns the metamorphic vats in the bottom chambers of Starside’s aeries in Brian Lumley‘s Necroscope series. Aeries are mile-high rock formations inhabited by the Wamphyri, an elite form of vampire; Starside is an alternate dimension where vampirism reigns supreme, passable only by a giant glowing portal sphere connecting it to Earth. The metamorphic vats are used by Wamphyri to transform human tissue mixed with various forms of vampire essence (urine, blood, spit, feces, and semen are all utilized) into monstrous vampiric constructs of war. The ending lines describe this process of seeding these fluids in all of the vats:

When composing Coagulate lyrics, I try to take as many possible elements of Lumley’s prose as I can in an attempt to be as authentic as possible to his writing style and vision. Words and phrases like “mordant fangs,” “The Change That Shapes,” “chitin armor,” “fibrous cartilage hooks,” “simulacrum,” “vestige,” “siphoning,” and “amalgam” are all descriptors taken straight out of the novels. Other parts of the lyrics, such as the opening lines, were an attempt to try to describe the flesh rendering and stretching of bone structure required by the metamorphic process by combining or reinterpreting various existing medical conditions:

I really enjoy answering any questions relating to the writing process, compositions, and how it all ties back to Brian Lumley‘s terrifying dual worlds of vampirism. I hope everyone enjoys all 4 tracks on this split and the insights each band gives behind them. The blood is the life!

In the music, a sequence of steady, skull-snapping beats and grumbling, bubbling bass tones provides the undercurrent to savagely seething and powerfully pulsating guitars, accompanied by truly cavernous vocal horrors. As the song progresses, a feeling of poisonous exultation flows through the jolting and swirling guitars and the vivacious bass lines, and the pop of the snare continues to trigger a reflexive response. The swarming, skittering riffs channel ever-wilder chaos, but the song’s jackhammering grooves keep the track moving forward in viscerally compelling fashion.

However, what was once weirdly (and frighteningly) joyful collapses in horror. The pacing abates, the vocals grow even more monstrous, and a repeating guitar refrain seems to cry out in deepening despair, until gales of buzzing chords, hammering percussion, and horrifying roars and screams create an apocalyptic finale. 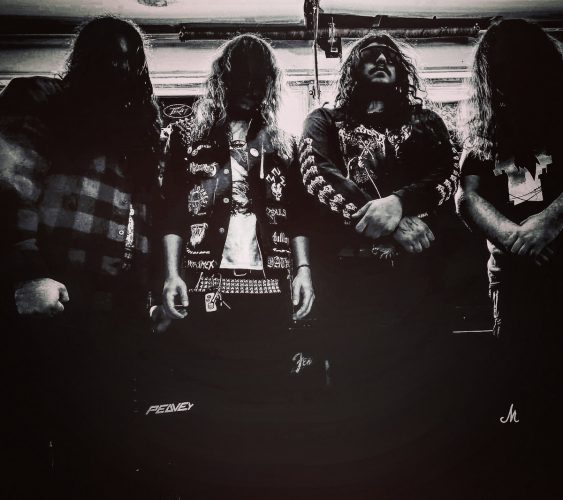 Los Angeles-based Soul Devourment take their place in the split with a high-energy, sci-fi-themed barrage named “Veneration of the Ascended”, and we begin by sharing these comments from the band about the song:

“Veneration of the Ascended” is a track that introduces the concept of our future works. In a technology-worshipping society in a far galaxy, the doctrine of the Technossiah calls for the people of the planet Mechronika to rise up and reclaim their former glory. After being enslaved by an alien species who emerged from their Webway Gates, the people of Mechronika have been oppressed for generations.

One lowly mine worker discovers beneath the ruins of their old civilization a powerful battle suit that was once donned by their ancestors during the golden age of Mechronika. The ancient relic soon chooses its host and reawakens lost knowledge from the past. Along with this knowledge comes visions of terror that former hosts have witnessed. Upon seeking the Reclaimer emerge from the mine in all its technological glory, The Mechrokinans now feel ready to pursue their path to former glory.

The latter half of the song is vocally performed in the lost language of the Mechoronikans.

The song was written in a style that was more on the d-beat Swedish death metal side. We felt that it was appropriate to show a side of us and embrace a bit of aggression and speed.

“Veneration of the Ascended” is a monstrous d-beat romp of bounding and battering drums beneath a wall of corrosive guitars, with its strange tale narrated through deep, ghastly vocals. The drums scamper and hammer, vocalist Frank Heredia barks like a rabid beast gone mad in a crypt, and the riffing generates a feeling of savage chaos — as exhilarating as it is mauling and mutilating. Compared to the first two tracks above, this one is a short, sharp assault… but it fades away into a chilling netherworld of whistling wind and moaning spectres. 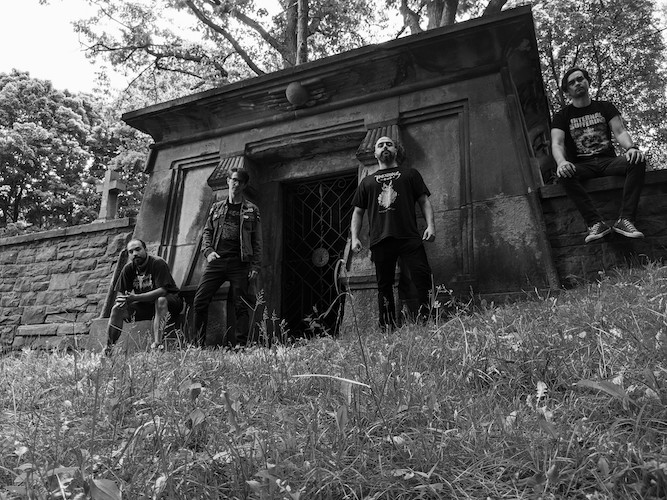 Toronto’s Gutvoid conclude the split with another long track, “Murmurations From Twilight Bodies“, and it’s one that proves to be a multi-faceted experience. Guitarist/vocalist Brendan Dean shared these words with us about the song’s lyrics:

Murmurations From Twilight Bodies tells the story of someone who is visited by a group of otherworldly beings that dance and whisper in a maddening frenzy about the room, coaxing their victim to be as they are. Finally, while in the throes of sickness and delirium, our poor subject gives in to their “murmurs and murmurations” and, in death, becomes one of them to visit other sickened individuals and beckon them to join him in the beyond.

When writing the lyrics I started with the idea of the word play between murmurs and murmurations – that between a hushed language, and the other a language of shapes made by a throng of birds, each conveying a message that is difficult to interpret. With that I wanted to suggest that these creatures that visit in the night whisper in an argot that isn’t understood, and in similar to their fluttering about the room like some terrifying spirits or night terrors that can’t fully be seen or interpreted but instead felt. Something about that idea just seemed horrifying to me, especially to someone bedridden and ill in the middle of the night!

I also wanted to try and follow the flow of the music and tie the story in with it – musically, the song starts as it ends, as if waking up from a sleep and then finally going back/giving into the greater sleep of death; having frantic parts to mimic the subject being faced with and trying to fight against the draw of their nocturnal visitors; the lead over the chorus as if the calls of those entities, and similarly the lead over the section before the final chorus being the same as the outro, as if the first iteration of that lead being the subject’s cries of horror (with that scream to go along with it), and then when it comes back slower and more fully fleshed out, it becomes the cries of acceptance of what they have become. There are a lot of ties between each section, riff and lead in Murmurations, and I wanted to make sure the lyrics also captured that idea – so hopefully it did!

At the outset of “Murmurations…” the guitars seem to toll like funeral bells, but the music rapidly accelerates in a torrent of hurtling drums and pestilential riff swarms, accented by freakish, shrill, darting fretwork dementia. The bellowing and howling vocals are gruesome, and scintillating solos burst out in seeming ecstasy, while strange guitar harmonies twist and turn (the channel separation of the guitars is a very cool effect, and you definitely ought to listen to this one with headphones if you can).

After all that, it’s a bit of a shock when near crystalline guitars ring out in seductive tones, but on the other hand, that bright reprieve doesn’t last long. It’s soon replaced by writhing, moaning, and groaning melodies unfurling over acrobatic drums, and accented by a supernatural guitar solo. The play-off between the channel-separated guitars continues to be a riveting experience, while the bass is an ominous presence in the low end and the drums remain determined to put fractures in your spine.

There’s another change ahead, and an important one. The pace slows and the guitars ring again like a corroded bell, paving the way for a soulful — and soul-stricken — solo that forms the core of a heart-breaking finale.