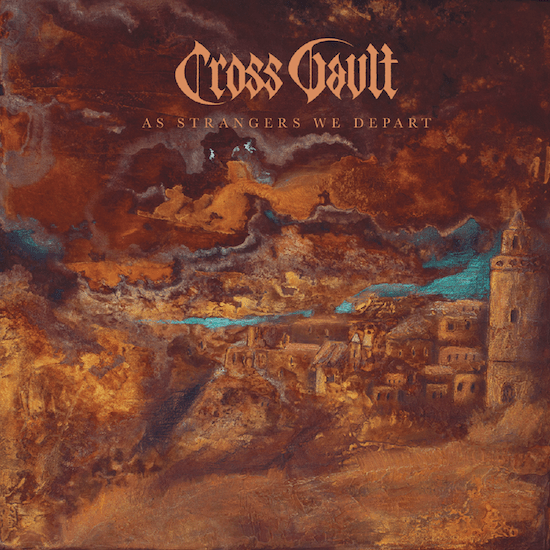 On May 28th Iron Bonehead Productions will release As Strangers We Depart, the third album by the German “Viking doom” band Cross Vault, and their first release since the 2016 EP, Miles To Take.

Each song on the new album is an immersive, time-traveling spell that seems to carry the listener back to a mythic age. They meld poignance and passion, heaviness and heartbreak, with an unmistakable feeling of reverence. It’s a devotional album meant to be savored, to be soaked up from start to finish, the kind of experience in which any sense of time passing vanishes. And thus we’re proud to present a full stream of it today. 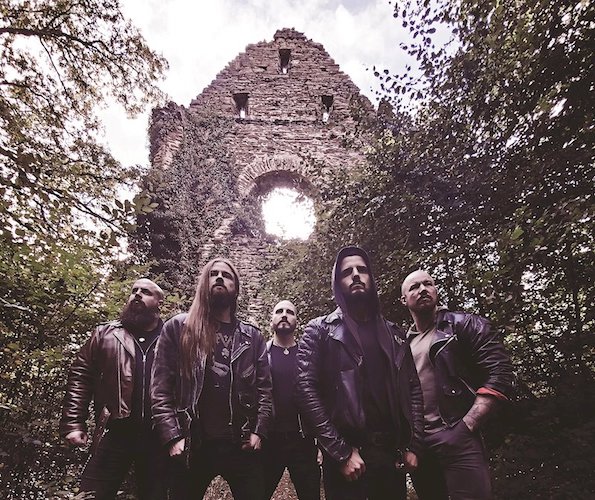 The songs are mesmerizing laments, anchored by heavy, craggy riffs and doleful, stately, and thoroughly immersive melodies with an Old World atmosphere, and accented by wistful acoustic guitar instrumentals, glittering arpeggios, jolting chords, and a rich panoply of soulful, heart-wrenching solos. They’re capable of inspiring your own memories of loss and regret, but they also sometimes ascend to majestic peaks where cold winds blow and the sun might shine across glittering fields of ice. “Viking doom” might be the name the band are known by, but some of the songs (especially “The Unknown Rewinds”) also reveal a Celtic flair.

Apart from the band’s talent for creating powerful emotional melodies, vocalist N. (who is also the man behind Horn) is a spine-tingling presence. He has a reverential, haunting, and yet gripping singing voice but he also reveals a fierce, gritty, soaring intensity when needed, and is capable of channeling a range of melancholy and harrowing moods in persistently epic fashion (the intensity of the singing also sometimes derives from well-placed dual vocal harmonies).

Despite the generally slow pacing of the songs, the band also greatly benefit from a vibrant rhythm section in which the bassist plays a prominent role and the drummer’s sharp, popping, snare-work and rumbling double-kicks add sparks of electricity in even the most stately of Cross Vault‘s musical processions.

The album includes two instrumentals, sans vocals. The first of those, “Ravines”, is short but sublime. Performed with ancient instruments, it has a medieval atmosphere. The second one, “Silent Wastes Untrod”, reveals a different kind of experience from the rest of the album. A mystical, synth-driven song, it’s bright, buoyant, and thoroughly captivating, and sends the listener out of the album with an uplifted heart.

Iron Bonehead will give the album the lavish treatment it deserves, releasing it on both LP vinyl and CD formats. Again, the release date is this coming Friday, May 28th.

One Response to “AN NCS ALBUM PREMIERE (AND A REVIEW): CROSS VAULT — “AS STRANGERS WE DEPART””