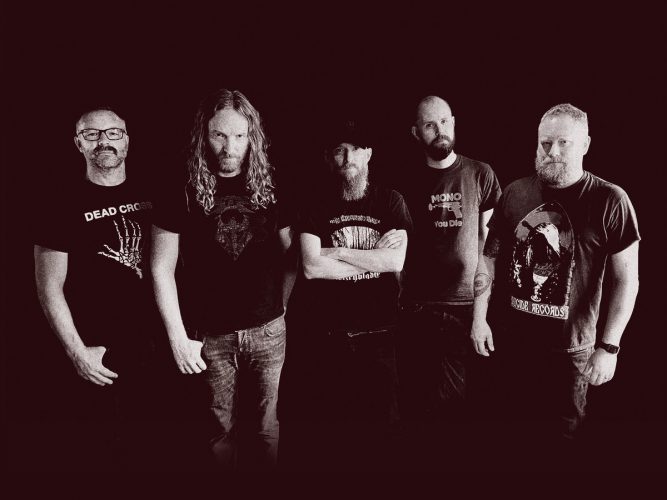 It’s very likely that a large part of what might catch people’s eyes with a project like Grand Cadaver comes from the band’s lineup – so much so that I assumed our search bar had to be broken within our smoking crater of the internet since I could’ve sworn they’d gotten a shoutout here before.

The project itself is one of many recent creations of the swede-death revivalist forge. While the genre has never gone away, the last few years have seen a humongous resurgence of groups playing that blueprint-perfected, chainsaw-toned, snare-drum-thumping style of death metal. The revivalists often seem to have been made up of names from larger projects – many from the melodeath scene even, as if to stake some sort of claim along the lines of ‘We can play this type of shit too!’.

In the case of the newly founded Grand Cadaver project you have Dark Tranquillity‘s Mikael Stanne at the vocal front, and alongside him stands journeyman drummer Daniel Liljekvist (whom you might recognize as having sat behind the kit for In Mourning and Katatonia in times past), with Stefan Lagergren (whose resume is deep in the death metal scene, including an early stint in Tiamat as well as years in Expulsion), Alex Stjernfeldt (most recently of Let Them Hang, and Novarupta) and Christian Jansson (Pagandom, ex-Transport League) completing the lineup. To say that the group’s resume is stacked is putting it mildly.

So, when you see names like that with the death metal tag attached to it and a near-thirteen-minute EP entitled Madness Comes… you pretty much know what you’re in for from moment one. 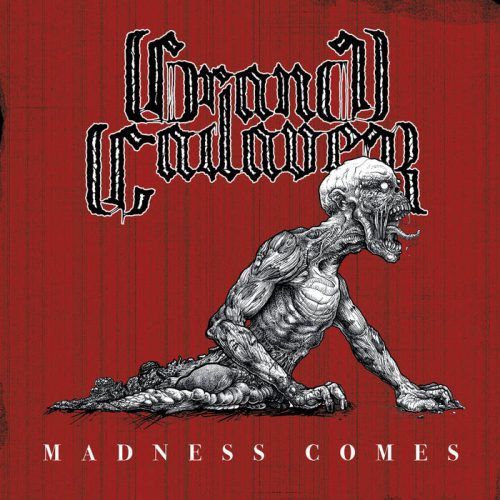 Grand Cadaver absolutely tear through their first EP. After the release of the single “Fields Of The Undying”, which is also included in this EP, Grand Cadaver saw fit to jam out three more tracks – in three days according to their Bandcamp page – and kick out Madness Comes, which saw release in early February after having an initial landing date of late last year. It’s about as red meat a release as they come, death-obsessed, very old-school tinged, and containing the sort of songwriting for which anything over four minutes would feel like a funeral doom track. The longest song is the EPs second track “Staff Of The Opressor”, which weighs in at a hefty three and a half minutes.

Grand Cadaver bury themselves in grinding guitar tone and propel forward via the constant march of death-metal thud. The percussion is about as punchy as it comes and every hit feels like a personal attack. Madness Comes is filled with a recognizable take on this style so you’ll almost instinctively find yourself following along to the sort of martial ‘one-two’ death march that is employed here.

The other three songs present on the EP hit with the same amount of force as the aforementioned “Staff Of The Opressor”, which means that you’ll know exactly what your ticket bought long before opener “Madness Comes” wraps up. As a twelve-and-a-half-minute shock to the system, Madness Comes is perfect, but it will be very interesting to see how Grand Cadaver plan to stretch out an album’s worth of material from this approach. On their Bandcamp page, they describe themselves as a hybrid of a multitude of different extreme genres, so the potential for the band to go just about anywhere is huge.

As it stands, we’ll likely be learning more in the lead-up to their full-length in the fall. If it’s a huge block of death metal, that’ll be fine, as Madness Comes shows they can definitely punch well around their weight class in an increasingly crowded genre. But if the group stretch their wings even further than the beating that this EP offers, well that’ll be something to watch as well.

(On their FB page, Grand Cadaver say the album will consist of entirely new songs not present on the EP, and that it will be released by Majestic Mountain Records this coming autumn.)