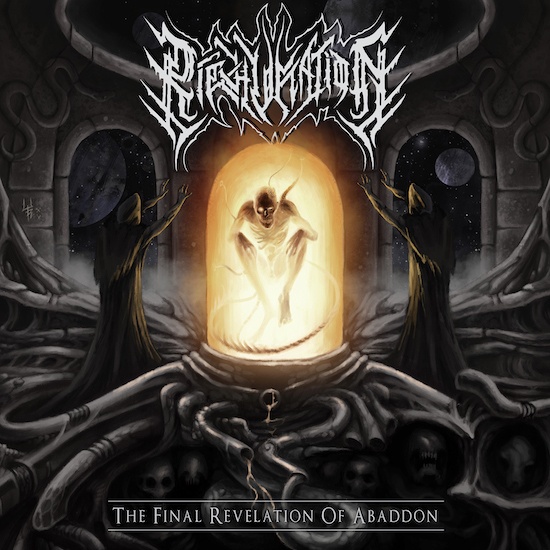 After releasing a pair of demos and an EP from 2012 through 2017, the Italian death metal band Riexhumation then turned their energies to the creation of a debut album that’s now set for release by Lavadome Productions on this coming Friday, May 28th — and it turns out to be a big, eye-opening surprise that should be greedily welcomed by death metal connoisseurs.

It’s not as if this quartet are green newcomers — in addition to those three previous Riexhumation releases, a glance at their resumes on Metal-Archives shows their involvement in other noteworthy extreme metal collectives — but this album is still a most impressive accomplishment.

To borrow some of the (accurate) words from the PR material, it embraces primeval and frightening energies that “dwell somewhere deep within the chasms of the cosmos” to create “ominous, old school death metal darkness” that’s alternately “doom-laden, eerie, raw, and blistering”. It evokes anguished dread, instinctual terrors, and visceral thrills in equal measure, and does so with admirable song-writing dynamism and instrumental execution. 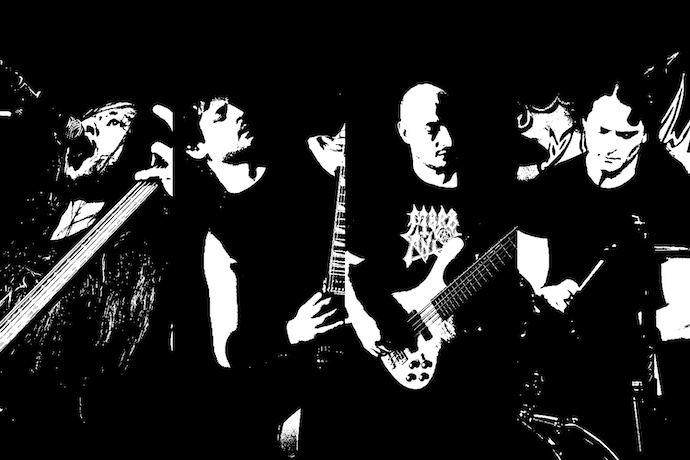 The introductory track begins with a slow, dismal, distorted arpeggio backed by skittering, whining, and moaning sonic excretions and titanic percussive blows. Weird roaring and warbling tones maneuver eerily through that collage of experiences, and all of this sets the stage for what’s to come….

…and with a gargantuan roar, “Inbreeding A Final Form In The Flesh” takes flight in a fury of snare-driven battering, boiling and jolting riffage, and channel-shifting lead-guitar dementia. The clatter of the snare and the vicious feverishness of the fretwork keep the pulse popping, while gruesome heaving chords and macabre abyssal growls add to the unearthly horrors of the music. The song manages to be both crushing and deranged, and a feeling of flesh-eating poison radiates from the closing passage when the pace slows.

In the following songs, the band continue braiding together sensations of insectile feeding frenzy, bone-smashing ferocity, methodically stomping brutality, and morbid, soul-suffocating gloom. As they shift the rhythmic tempo and the speed and mood of the riffs, the band also insert jolting, skull-plundering grooves and gut-rumbling bass lines, together with a panoply of transfixing solos that range from slow and anguished slitherings to eerie, alien wailings and white-hot scorchers. The pop of the snare drum continues to create a vivid recurrent momentum, and the gruesome growling and bellowing in the vocal department maintains a mood of bestial heartlessness.

Here and there, the band also deploy synths and other electronic torture devices to create chilling, off-planet atmospherics, which not only provide short breathers in the savagery of their attacks but also underscore the album’s overarching aesthetic of unreasoning evil. And they also introduce evocative melodies (perhaps most prominently in the sorrowful “Ascension XIV” and the reptilian, exotic “The Vectorcvlt”) that further help differentiate the tracks.

Though this is a debut album, it does indeed reveal a band who’ve got a talent for dynamic, mood-altering songcraft, coupled with impressive technical chops, and those talents enable them to carry listeners through nine tracks without much risk of them losing interest before the end.

Credit for the cover art goes to Roberto Toderico. Lavadome will release the album on CD, cassette tape, and digital formats, all of which are available for pre-order now:

One Response to “AN NCS ALBUM PREMIERE (AND A REVIEW): RIEXHUMATION — “THE FINAL REVELATION OF ABADDON””