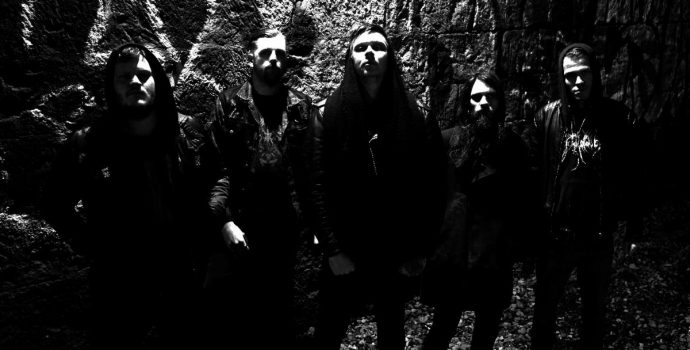 Back after five years, these Icelanders are bringing forth only their third release in a decade, a debut album named Vítahringur. It comes out via Dark Descent on July 2nd. To pave the way, “Í köldum faðmi” was revealed yesterday. 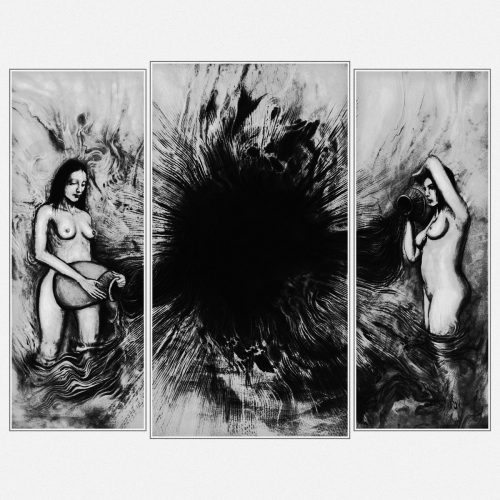 Here, a scary, ritualistic, electronics-heavy intro leads into a roiling, battering vortex of sound accompanied by truly frightening vocal roaring, segmented by bass-loaded, spine-slugging, swaggering movements and chiming, anguished melodies over booming drum detonations. Gripping, unnerving music, and a tremendously powerful production… why I haven’t yet listened to the rest of the album is perplexing, but it won’t be too much longer.

The opening track of this black/death band’s second album, Veneration of The New Dawn, makes a chilling impact. A collage of alien sounds that includes horrifying, demonic vocals consumes the first couple of minutes, and what follows is a dense, poisonous miasma of oppressive riffing backed by thunderous drums and continuing vocal terrors. An atmosphere of crushing, otherworldly evil shrouds the music from beginning to end (where we are again transported into a blood-freezing nether realm).

Veneration of The New Dawn will be released on July 26th by Godz Ov War Productions.

I suppose it will become obvious why I paired this next song with the one from Cultum Interitum. It too is a blood-congealing black/death gauntlet marked by cannon-like drumming and gut-rumbling bass tortures, but the riffing here is a boiling mass of pestilence and bodily corruption which reaches fever pitches of lunacy in the shrieking, quivering solos, and the vocals are monstrous guttural growls. Violent musical madness in the red zone of intensity… until the closing moments when we’re enveloped in a freezing void.

“All Along the Sigils Deep” is from Antediluvian’s first album in eight years. Entitled The Divine Punishment, it will be released by Nuclear War Now! Productions on September 1st.

Now we have a slight change course with “Devoured By Hypomyces“, a merciless marauder made of crazed snare-drumming and uber-deep, uber-mutilating, down-tuned guitars that grind and skitter. The music heaves, darts, and bludgeons — and becomes weirdly ethereal and wailing when the marauding pace drops into a gruesome crawl. The gutturals are gruesome throughout.

The cleverly titled album, Scream Bloody Spore, is out at the end of June on Coyote Records and is described as “a raging journey through a hidden world of decay, parasites and deadly toxic organisms” — which pretty much sums up the global death metal scene, don’t you think?

DGR suggested this next song in case I needed “a bludgeoner for a future roundup”. When have I ever not needed a bludgeoner? Thankfully, “Desecration of Flesh” does satisfy the need. It hammers like a merciless pile-driver and spits bullets like a phalanx of automatic weaponry, all of it under the command of a bellowing maniac. Vividly darting leads and bubbling bass tones add elements of lunacy to what is otherwise a machine-precise beating. If you have an eggshell skull, don’t listen to this.

As far as I can tell, this seems to be the second single by this Bay Area band from a forthcoming album named A Kingdom Below. I included a drum playthrough video of this same song.

In “33 (Ars Sinistra)” these Tijuana-based death/grind medical maniacs give us ugly, gurgling and choking growls, unhinged screams, blistering drumwork, and swarming chords with a flesh-eating sickness in their aroma — but they also manage to infiltrate soaring and swirling melodies that are somehow grand as well as miserable. They pack a lot of changing action into this dynamic track, and it’s a thriller throughout.

P.S. If you’d rather not watch simulated gore-drenched surgical evisceration (I hope it’s simulated!), you might want to avoid the video and just listen. The song is from a debut EP named Arte Médica Siniestra that’s coming out this Friday, May 28, via Concreto Records.

I thoroughly enjoyed this next video. As performance videos go, it’s very well-made — with the performers beautifully lit against a pitch-black backdrop. The song is very well-made too, and features ferocious (and ferociously impassioned) vocals by three of the band’s four members.

Infern describe their music as songs “at the crosspoint of Deicide, Bolt Thrower and Gorefest“. This particular track is heavy as hell and steeped in morbid gloom, with wailing leads that channel misery. But the riffing also becomes maniacally jittery, accelerating the music’s pulse to feverish levels — and at around the 2:30 mark the band will give you an irresistible opportunity to hammer your head like a piston.

“Victim of the doom” is one of two songs on a forthcoming single that was mixed and mastered by Charles Elliott from Abysmal Dawn.

At least initially, Infern’s song began taking us down a doomy path, and this next song by Funeral Chasm, accompanied by a lyric video, takes giant steps down that road — or rather deep into a sub-sea abyss. The opening minutes of “Sunrise Vertigo” really do seem like a deep plunge into a watery funeral chasm, accompanied by cavernous growls, chilling screams, wailing clean vocals that impressively soar into falsetto range, murmuring bass notes, and eerily gleaming guitars. The song is harrowing and deeply haunting, but when the drums and vocals vanish (and even after they return), it also becomes mesmerizing.

The song is from the band’s debut album Omniversal Existence. It will be released by Aesthetic Death on July 2nd.

I felt like we needed something to pull us up after that last track, and for that I’ve turned to “The Archive“, which is the opening track on Wormwood’s new album Arkivet (which itself means archive in English).

It may not seem uplifting at first, because the voiceover (and the subsequent imagery in the beautifully made video) set the song in a pandemic that has led to complete social breakdown, and the song’s principal guitar melody is deeply melancholy. But there’s also an irrepressible energy in the music, and a sweeping grandeur in the sounds. The trilling leads are glorious, and the vocals are tremendous. When the full-throttle pace of the song abates, the clean guitar solo that arrives is simply sublime (and would make a performer like Carlos Santana proud).

I dunno, maybe “uplifting” is the wrong word, given the amount of heartbreak in the song and the torment so powerfully channeled by the vocals. Maybe “hopeful” or “inspiring” would be better choices. Or maybe I’m just an incurable optimist.

Arkivet will be released on July 16th by Black Lodge Records.

Now for the curveball.

This performance was filmed during the Roadburn Redux virtual festival last month as a streamed live show. It took place at UT Connewitz, a more than one-hundred-year-old cinema in Leipzig. The music is the title track to the group’s debut album, Stroh Zu Gold, which will be issued on June 18th.

The video is excellent — we get to see two of the performers create repeating loops of swirling ethereal sound (with what looks like an electrified lap-steel) and propulsive beats before they take to their guitars along with the bassist, adding to both the gloriously airy and astral quality of the song and its pulse-pushing drive. Might make you want to bounce and to dream at the same time. (Did I mention how much fun it is to watch these three doing their thing in the video?)