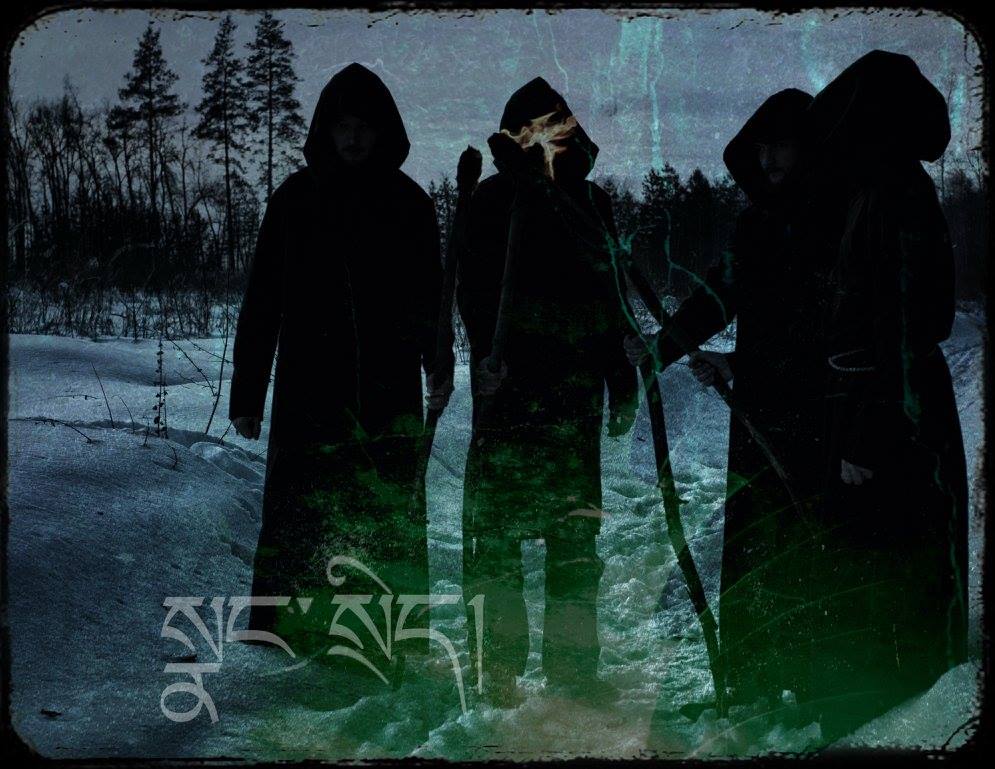 For all that I warned you about how utterly unforgiving and potentially inaccessible this band can be, the first track on their first album actually eases you in relatively smoothly, beginning as a stream of sombre synths and spectral atmospherics, all underpinned by some steady, patient drum work, allowing you to acclimatise to the overall mood and feel of the album before the guitars finally come crashing down.

And crash down they do, in devastatingly doomy fashion, laying down a series of humongous, hanging chords and morbid melodic leads whose grim demeanour and glacial pace disguise the song’s slow but steady evolution.

Despite the fact that it’s over five full minutes before a single, gut-wrenching growl is uttered, and that large swathes of the track’s almost twenty minute run-time feature no vocals at all, there’s still a defined sense of character, and a definite sense of forward motion, to “Over Cold Tombs”, especially during the song’s second half, where the build up of both atmosphere and momentum becomes even more intense and suffocating.

Track two, “Between Two Mirrors” is, if anything, even more grim, and also even more grandiose, as epitomised by its ever-present undercurrent of evil, imperious synths – whose presence and performance plays a huge role in defining the bleaker and more blackened feel of the song – and periodic interjections of solemn, spoken-word passages as a brooding counterpoint to all the guttural growls and thunderous guitars.

“House of Woe” is twenty minutes of tolling chords and haunting ambience, which moves back and forth between minimalist, piano-driven melancholy and gloomy melodic grandeur, booming, bowel-loosening heaviness and darkly depressive (borderline DSBM-level) atmosphere, with the sort of inevitable, irresistible, momentum of a tidal swell, practically drowning the listener in misery with every gruesome, howling vocal and simple, yet sublime, lead guitar line.

Last, but by no means least, “The Dawn My Unawakening” initially leans – very effectively I might add – on the more purely ambient/atmospheric side of the band’s repertoire, before unveiling a deliriously doomy lead guitar line and a series of slow-blooming, bass-heavy guitar parts which firmly and finally (as if there was ever any doubt) establish the group’s credentials as a fully immersive, phenomenally heavy, Funeral Doom act to be reckoned with.

The band’s second album is, without a doubt, bigger, heavier, and darker, than their first, in practically every way.

Beginning with the droning ambience and haunting horns which introduce “Yi Kun” – a song so hypnotic that its titanic twenty minute length seems to pass by almost in the blink of an eye – it’s clear that Abysskvlt have come a long way as a band and, more importantly, as songwriters, over the last couple of years, with their increased confidence manifesting itself in a bigger focus on atmosphere and an increased use of more esoteric embellishments – from traditional Tibetan instrumentation to passages of ululating throat-singing.

That’s not to say they’ve neglected the purely metallic side of their sound, however – far from it – as when the guitars finally kick in around half-way through the album opener… well, they’re nothing less than gigantic, while, at the same time, the band’s use of melody has become crisper and clearer, even as the vocals have expanded their range to explore even more guttural depths and harsher, blackened howls.

The absolutely chilling intro to “Self-Renounce” – all pealing melodic notes and unnerving, whispered vocals – is a perfect example of the band’s ever-improving grasp of nuance and atmosphere, laying the groundwork for a track where the space between the crashing chords and chiming leads is almost as, if not more, important as the morbid mix of bitter, blackened snarls and brutish, bestial growls, which make up the vocals.

“Cryptomnesia” might just be the heaviest cut on the album (making it the heaviest track in the band’s arsenal thus far), kicking off with the sort of booming, sub-bass heavy ambience that triggers flashbacks to the last time I saw Treha Sektori live, before dropping into a mournful procession of hellishly heavy, devilishly doomy riffs and majestically miserable lead melodies, topped off with a moody mix of vocal styles – gut-wrenching growls giving way to poetic spoken passages, windswept whispers transitioning into throat-scarring snarls – which add an extra layer of devastating emotional weight to the track’s suffocating sonic presence.

And while closer “Deathforms” initially sets out its store in a dramatic display of ominous synths and oppressive riffs, it’s actually the song’s lengthy ambient and atmospheric excursions – from its early trip into more ritualistic, blackened tones to its climactic descent into an eerie, echoing abyss – which have the biggest impact, demonstrating in one fell swoop just how far the band have come since their debut.

With their third album (released earlier this month) the quartet have chosen to dive even deeper into the cultural and conceptual underpinnings of their music, utilising even more esoteric and ambient elements while focussing in, lyrically, on “stories about the sky burial ritual, the transition to a state of bardo and rituals of veneration of the sacred peaks and mountains”.

Beginning with sinister, simmering slow-build of “Jhator”, it quickly becomes clear (with “quickly” being a relative term, in this instance) how much more closely aligned and seamlessly integrated the various facets of the band’s musical identity are this time around, with the transition between different states and stages of being – including one which I can only describe as “Ambient Doom” – being practically imperceptible.

The brooding guitars and breathing bass tones of the aforementioned “Jhator” – whose menacing, mesmerising vibe and vile, venomous vocals help the song seize your soul in an iron grip for eighteen unforgiving minutes – continue to rumble and ring out through “Nga-Ri”, yet also take on a moodier and more melodic aura in the process, which in turn is complemented by this second track’s heavy use of dreamlike, doom-laden ambient sections which add a welcome sense of depth and dynamic space to balance out the dense, dramatic weight of the guitars.

You’ll also note, I don’t doubt, that the vocals are arguably even more morbid and macabre this time around, switching and shifting between grisly growls and cadaverous snarls, resonant litanies and unsettling whispers, in a way that echoes the band’s own ongoing shift away from the rules and restrictions of “traditional” Funeral Doom towards a more purely and purposefully “ritualistic” mode of expression.

That’s not to say that your average Funeral Doom fan (if there is such a thing) won’t still find a lot to appreciate here, however – not when the clanging chords, blood-curdling growls, and piercing lead lines of a track like “Phar” are there to demonstrate that Abysskvlt are still very much in touch with their roots, at least – while the spine-chilling snarls and unremitting bleakness of the track should also reassure the band’s fans that they’ve not lost their “blackened” edge either.

Concluding with the mournful, yet strangely meditative, strains of “Mchod Rten” (both the longest and most non-traditional track the band have ever written), it’s obvious to me that Phur g. Yang marks something of a watershed moment for Abysskvlt, one which sees them moving even more fully into their own unique sphere – call it “Ambient Funeral Doom” if you must – which, while definitely not for everyone (I won’t fault you if you simply can’t find the right headspace to appreciate these albums by any means) should enable them to continue growing, evolving, and expressing themselves, for years to come.