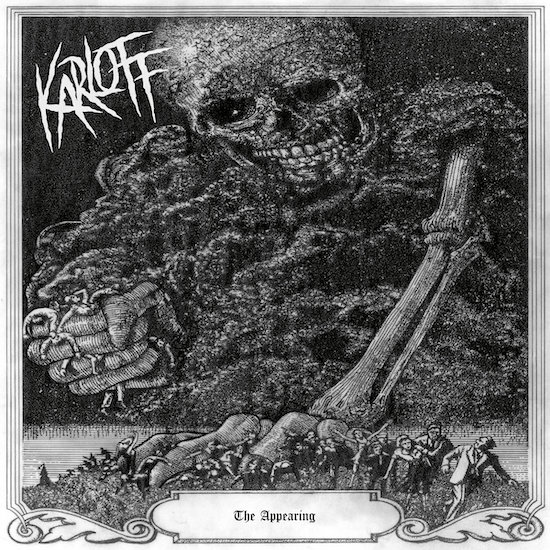 Last year Dying Victims Productions released Raw Nights, a 20-minute vinyl/digital record that combined the German band Karloff’s new EP and the tracks from their debut demo. After encountering it, I wrote: “Karloff’s formulation of raw punk and black metal is undeniably sinister, and it runs like a wild wolf-pack on the hunt (or an angry gang marauding through mean streets), but it has made me feel not just glad to be alive, but kind of rapturous too. Its feral, stripped-down attack and high-voltage energy appeal at a primal level, and the immediately infectious nature of the songs makes them easy to stick with, and to use as a means of lighting a fire to any playlist whenever they pop up.”

It was thus exciting to learn that Karloff were following up Raw Nights with a debut album entitled The Appearing, which will also be released by Dying Victims (on July 30th), and we’re just as excited to now premiere a video for an album track named “Hate Consumer“. 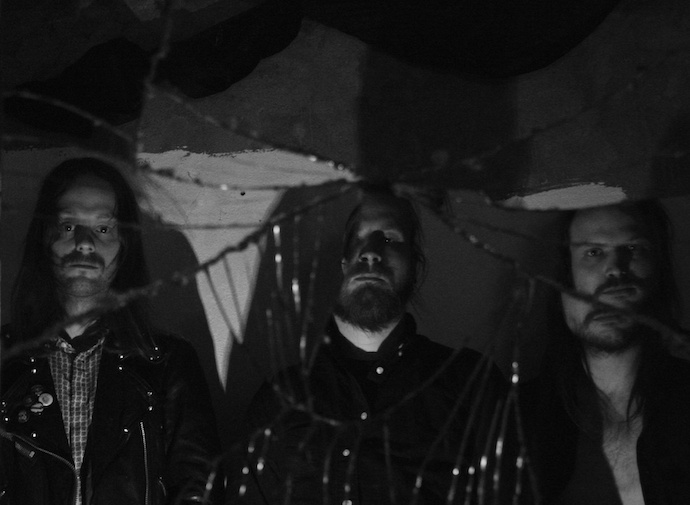 Karloff is the brainchild of erstwhile Graveyard Ghoul member Tom Horrified (who performs guitar, vocals, and hydrophone on the new record), joined by a couple of close comrades — T. Tombstoner (bass, harmonium) and H. Steinbrecher (drums, piano). Together, they’ve formulated a brand of metalpunk that surges into the bloodstream and compulsively roots itself in the listener’s reptile brain, while also interweaving songwriting ingredients that contribute to an atmosphere of creepiness and evil. “Hate Consumer” provides a great example.

This is the kind of song that should come with a “Get your neck muscles loose!” advisory. It’s packed with head-moving beats and big, body-moving riffs, which also happen to be virally contagious and quickly addictive. Its visceral energy, given extra fuel by Tom Horrified‘s raw, braying vocals, pumps up adrenaline levels damned fast. The punk drum battery and big, slashing chords create a feeling of wildness, both exuberant and malefic. The sinister elements of the song are underlined when the drum pattern changes and eerie notes ring out just before the riffage begins to skitter and pulse.

Be forewarned about the video: If you’re vulnerable to flashing lights, you might want to listen and not watch. But if that’s not an issue, the video (made by Beasty Butterfly Productions) does a great job capturing the energy and lighting of a club performance, coupled with flashes of action that connect to the theme of the song.

Dying Victims Productions will present The Appearing on CD, cassette tape, and vinyl LP formats, as well as digitally. Pre-orders are open now. And below we’re also including a stream of teh new album’s first single, “A Violent Winter” — don’t miss that one either.