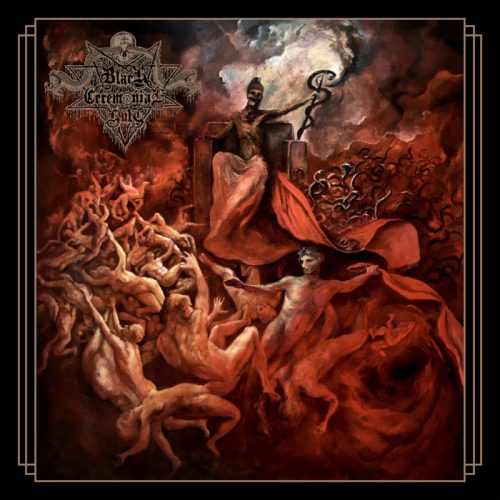 On June 14th the Chilean black/death band Black Ceremonial Kult will add to their collection of demos and splits that have been released since 2014. The newest release, which will come our way via Godz Ov War Productions, is named Crowned In Chaos. As you will discover through our full stream of the EP today, that title is well-chosen.

Through the first seven tracks of this 11-track release, the music alternates, creating chilling visions as well as explosions of breathtaking violence and madness, yet the tracks flow into each other seamlessly, creating a massive hallucinatory psychosis. 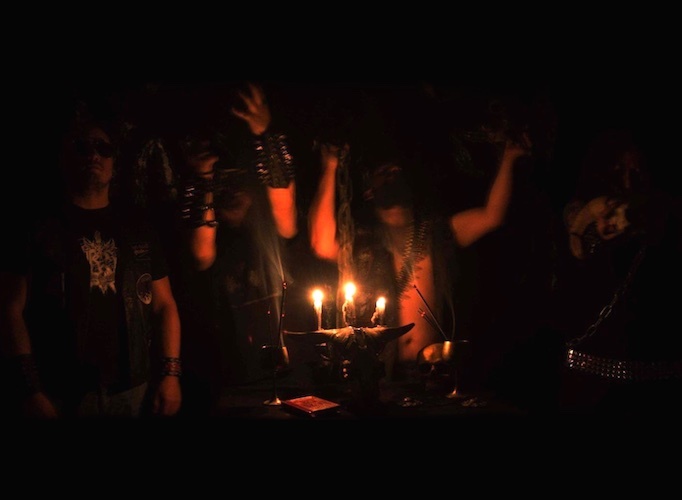 The intro track, “Blood in the Secret Chambers of Ikenti”, sets the stage through a wash of glimmering ambience and reverent choral voices, coupled with the reverberation of ritual drum beats and chilling demonic snarls. The listener’s first exposure to terrorizing chaos then comes in stunning fashion from the dense sonic typhoon of “Chariot of the Sphinxes”

The song assaults the senses with furious drum-blasting, scathing riffage that has the gleam of sharpened scalpels, heaving and harrowing low frequencies, scorching screams, and gruesome roars. The sound deluges the senses, but avoids the turgid murkiness that plagues a lot of blackened death metal, and the band keep you on your toes by shifting the rhythm into titanic pile-driving cadences laced with moaning string radiations and poisonous, slithering melodies, creating visions of terrible eminence.

With the alternating pattern set by those first two tracks, the band propagate the sequencing with the infernal interlude of “Boiling Substances in Hellish Trance”, in which ambient mists and macabre distorted pronouncements combine to create blood-freezing frightfulness, and they then follow that with “Under the Khaos” — another storm of bone-smashing drumwork, dense sandstorm riffing infiltrated by quivering demented leads, and a cacophony of horrific growls and cauterizing shrieks. As before, the pacing does slow. The bass heaves like a leviathan, and eerie tonal radiations flicker and spiral high above, punctured by eruptions of hyper-speed blasting.

That song flows into another unearthly interlude, “The Projection of Sorcery and Blasphemy”, which in turns leads into “Masters Temple K.V.M.” Proceeding at a lurching pace, that song drowns the listener in waves of dismal chords and agonized instrumental exhalations. It eventually explodes in another violent and all-consuming paroxysm of sound — drums hammering, bass pummeling, guitars racing and raking — but the song also raises visions of evil majesty and subterranean terrors, and a buzzing guitar motif creates a mood of desolation and hopelessness in the midst of all the adrenaline-fueled mayhem.

In by-now-expected fashion, the path turns again with “The Scarlet Woman Dances for the Forgotten Godz”, but it’s a bit of a surprise. It’s not difficult to imagine a seductive dancing figure as you listen to the exotic dancing strings and gigantic, primitive drum beats over a droning hum.

But there, the alternations stop. There is no breathing room as you move through the terrifying gauntlet of tracks eight through ten — “K.K.K.”, “V.K.K.”, and “M.K.K.” In that sequence, the band first use “K.K.K.” to create a choking miasma of mind-mutilating, channel-separated guitars, which feels as bleak as a sucking chest wound. The energy mounts as the drums begin pounding. The ghastly voices roar, and unnerving guitar harmonies emulate a seething mass of disease and piranha-like feeding frenzies, punctuated by humongous percussive detonations.

From there, “V.K.K.” disgorges an improvisational-sounding effusion of roiling and obliterating madness, an unearthly vortex of ferocity and fear, disorienting enough to create queasiness and hallucination, even with drum patterns that occasionally connect with your pulse rate, and then make it race. The tempo steadies at the outset of “M.K.K.”, and the timbre of the sound becomes more abysmal and sickened, but still nightmarish and hallucinatory. The drumming quickens and clobbers, and the riffing becomes more frantic and ravaging. The sound slowly fades away, leading into the unsettling ambient collage of the outro track, “Instrospection Through the Unknown”.

One Response to “AN NCS EP PREMIERE (AND A REVIEW): BLACK CEREMONIAL KULT — “CROWNED IN CHAOS””