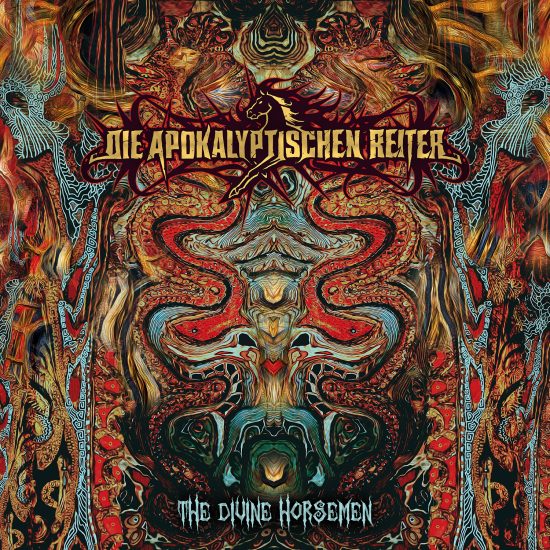 Sadly, I’m hurrying to complete this Sunday’s collection because, not so sadly, I slept much later than usual. I didn’t get much of a head start on the column yesterday, so the preponderance of the effort was left to these rapidly waning morning hours. Fortunately, as always, you’ll have the music streams, which are more important than my too-meager words anyway.

As bookends for the collection I’ve chosen advance tracks from forthcoming records, and in the middle are three complete new releases.

The opening song I’ve chosen, “Ymir“, combines dismal chords and sprightly, pinging keys, a skipping kind of march and a hammering gallop, nasty growls and scorching screams. The music becomes panoramic and magisterial, and flickering guitars give it bursts of ebullience, but the music’s overarching moods are ominous and anguished. The accompanying video is fascinating. 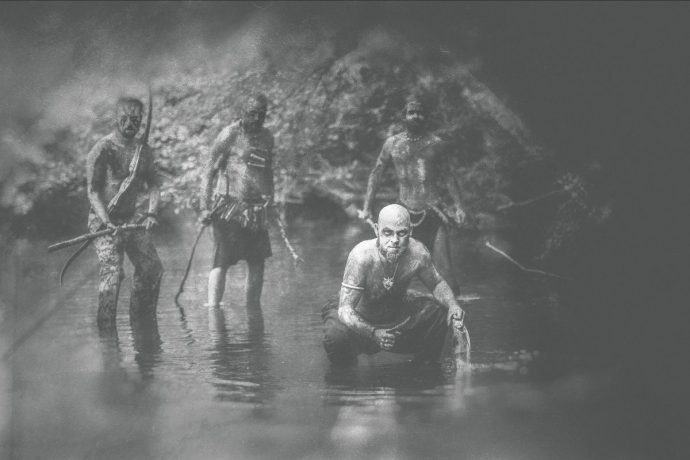 The song comes from The Divine Horsemen, an album being released in commemoration of DAR’s 25th anniversary. The press material characterizes the album as “a unique musical experiment: A session that has been recorded without any rehearsals or preparations during two days in autumn 2020”. The release date is July 2nd via Nuclear Blast.

I previously wrote about another song from the new album named “Tiki“: “Savage, crazed, blazing, and viscerally propulsive in its tribal rhythms — those are the immediate impressions of this first song, though I must admit that the wild and transfixing video that accompanies the song is a big reason why I picked it. It suits the music supremely well”. I’ve included that video along with the new one, in case you missed it. 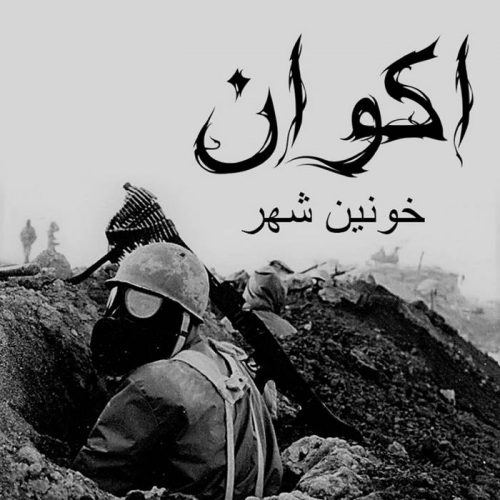 The Iranian band اکوان (Akvan), who has appeared frequently in this column, has always drawn inspiration from history, both ancient and more modern. The newest EP, City of Blood /خونین شهر, was inspired by Saddam Hussein’s bloody invasion of Iran which began in 1980, It “is dedicated to the myriad Iranian soldiers (many of whom were young volunteers) and civilians who lost their lives as a result of the eight-year Iran-Iraq war, as well as the countless Kurdish victims of the Al-Anfal genocide. May they rest in peace and remain forever free from the failures of mankind.”

Akvan’s alter ego Vizaresa has a scalding and strangled voice whose white-hot intensity is a match for the wrenching awfulness of the subject matter, and the bursts of machine-gun percussive violence are also intense, but what makes the song especially gripping are the reverberating trill of the melodies performed on the Persian lute called the tar. Their ringing tones are exotic to Western ears, but the anguished emotions they translate in such piercing fashion are understandable by all.

The next two tracks, “Hidden Wounds” and “In Narrow Graves“, also stand out because of the visceral, captivating power of the melodies. The former is at times more stately than the opening track, but will also rumble your spine. The timbre of the melodies combines heart-breaking grief with an aura of soaring, tragic majesty. The latter is an instrumental performance that departs from black metal altogether, and is even more mesmerizing as a result.

I’ve already written about the EP’s remarkable closing track, “Halabja”, which “was inspired by the horrific events that took place on March 16, 1988 in the Kurdish city of Halabja, Iraq during the final days of the Iran-Iraq war”. It’s thunderous in its rhythmic power and bleak in its riffing, but also blazes. There’s also (again) an unmistakable sense of sorrow in those charismatic tar melodies. I felt compelled to listen to the song repeatedly after I first heard it because of the compelling nature of the riffing, even though I knew the music would keep sending my heart in a downward spiral.

In short, Akvan has produced another harrowing triumph.

P.S. Akvan also recently published on Bandcamp an EP named Realm ov Fire / قلمرو آتش, which combines three singles first released in 2017, and it’s well worth your time too. I’ve included the link for that one below, in addition to the one for the newest EP. 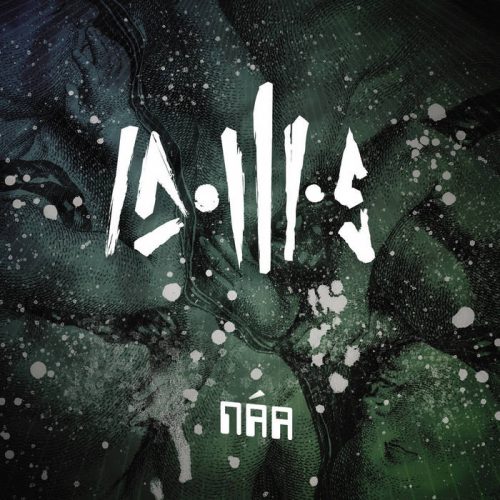 You’ll learn from the album’s opening “Prolog” that Idolos are capable of generating massive, heaving, low-end power that claws and grinds through stone, while also using shimmering sonic mists and inviting electronic pulses by way of contrast. From there you’ll also discover that they have a ferocious, teeth-bared vocalist, a dynamic rhythm section, and a knack for sending waves of flowing and soaring guitar-and-synth melody that sound cosmically vast but are also often steeped in feelings of melancholy or oppressiveness. And the lightning-bright trilling guitar leads (whose sound is the main reason I put this album right after Akvan‘s new release) get their dark hooks in your head fast.

Idolos also change the songs (and the flow of the EP) in other ways, softening the sound and simultaneously enhancing the strange and sometimes entrancing “spaciness” of the atmosphere, and also introducing other macabre vocal expressions that increase the music’s “fear factor”. And to give you a further sense of how varied the listening experience is, I’ll repeat what I specifically wrote on another occasion about “The Miracle of the Maize”: “The music chimes and shimmers, gradually pulls us into moods of increasing despair and mounting intensity, and sends hearts soaring with a magnificent solo. All the vocals, from the wrenching growls to the sky-high singing, are gripping. Such glorious, spellbinding gloom is not soon forgotten….”

The nearly full stream of the EP is on YouTube, but not yet on Bandcamp. I saw “nearly full” because there’s a fifth track listed on the label Bandcamp page, “Lustful Father”, which isn’t in the YouTube stream. 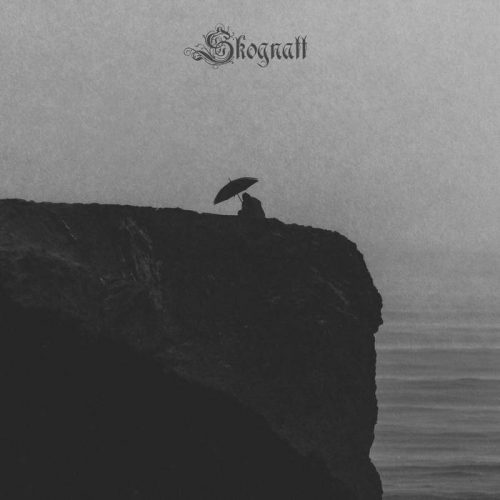 The German atmospheric black metal band Skognatt, who’ve drawn our attention on other occasions (e.g., here), released a new EP one week ago named Rain Eternal, which seems to sum up about 9 months of the year here in the Pacific Northwest. With a title like that I couldn’t have resisted listening, even if I hadn’t already known about the band’s formidable talents.

The opening track, “Rain“, includes lyrics by Henry Wadsworth Longfellow. Given the subject matter, it’s not surprising that there’s a dreary, overcast quality to the abrasive riffing, but the ringing lead guitar, which pulsates in contagious fashion and flares in feverish shimmers, seems to war against the clouds. The deep hum of the bass and the pulse-quickening nature of the drums has a similar effect. A sublime acoustic guitar interlude creates further variation; as you listen to it, it’s not hard to imagine sitting at a window, alone, forlorn, and lost in your own thoughts, while the sky leaks its life away in a drizzle.

There are two other full songs on the EP — “Eternal” (with lyrics by the English poet John Clare) and “Fog” (with lyrics drawn from an anonymous source). The former races and wanders, and the latter stalks and stomps in head-moving ways, but might be the most bleak and bereft of all the tracks. In between are sad but spellbinding instrumental interludes composed of acoustic guitar and either mystical flute-like tones or haunting celestial reverberations.

This is definitely music for a rainy day, but it’s not so gloom-saturated as to make you want to leave it. It gets under the skin and stays there, and its changing dimensions make it captivating rather than sodden. 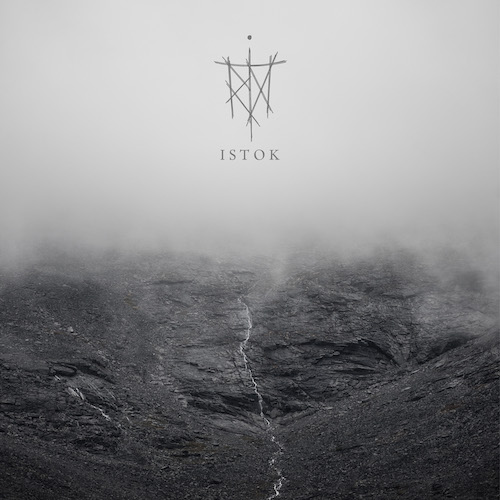 The closing song I’ve selected, which comes with a spectacular video, is “Shining“, a long track from a new album named Istok by the Russian post-black metal band Trna. It will be out on September 3 via Candlelight Records. The band give credit to Gaerea for the lyrics and vocals.

I decided to close with this song in part as a contrast with that Skognatt experience. As a long song, it incorporates changes, but the main sequence, which (to my ears) combine post-punk, shoegaze, and black metal, is just glorious. It fills the heart with joy and wonder, despite the harrowing effect of the tormented vocals, both harsh and clean. The brightness and sense of wonder in the music never really disappear, though when it becomes less extravagant in its surround-sound suffusion of the senses it seems to channel wistfulness, longing, and more depressive moods.

P.S. I intended but failed to help spread the word about an album named Ladoga, which was released in March by the band Olhava, and I want to steer you to it now via this link. I mention it here because Olhava is a side project of Trna guitarist Andrey Novozhilov and Trna  drummer Timur Yusupov.